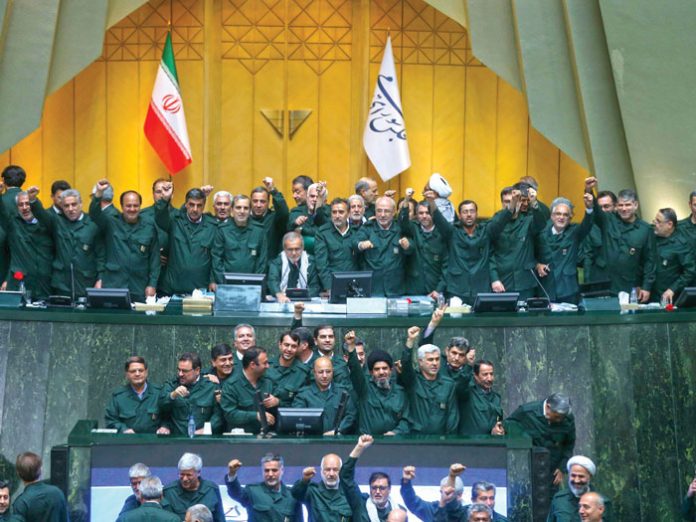 Some of us believe that the ultra-right Revolutionary Iranian Guard Corps (IRGC) is preparing to launch a coup against their elected (and comparatively moderate) president, Hassan Rouhani. Rouhani’s “crime” was not so much that he signed off on the no nuclear weapons pledge with the West, as that was probably inevitable in any deal to lift the sanctions that were strangling the Iranian economy. Even the Ayatollah knew that Iran was heading for bankruptcy, which is why he authorized Rouhani’s nuclear deal in the first place.

The IRGC’s real problem with Rouhani is that he seems quite serious about reigning in the rampant corruption within the IRGC. In the long run, the IRGC’s greedy financial arm is almost as much a drain on the national economy as the sanctions. Rouhani has insisted there would be no more insider no-bid deals from public funds. The IRGC is completely shut out of lucrative government contracts unless it agrees to participate in competitive bidding. How impertinent!

The IRGC is determined to get rid of Rouhani one way or the other. At first, they attacked his nuclear deal by developing long-range missiles capable of carrying nuclear warheads. The Ayatollah promptly slapped their wrist by placing short-range restrictions on the IRGC’s missiles. They whined but obeyed.

If the Ayatollah could not be goaded into taking action against Rouhani, then maybe Trump could. The IRGC turned up the heat by pumping billions of dollars into the Hezbollah militias that were killing American and allied soldiers in Syria.

Similarly, terrorist groups in Gaza were suddenly flush with cash, as were the rebels in Yemen, who were also provided with Iranian-made missiles to shoot at the Saudis. In May 2018, the new Trump administration had had enough. They withdrew from the nuclear accords and reimposed sanctions on Iran because of its support of terrorism.

The European nations accused Trump of overreacting. Every Western intelligence service agreed that Rouhani’s elected regime had scrupulously adhered to the terms of the nuclear treaty in good faith. It was his political opponents—the IRGC—who were trying to sabotage the deal and turn Iranian voters against Rouhani and towards the IRGC.

To Trump, it was a distinction without a difference. They were all Iranians who obeyed the orders of the Ayatollah. Trump had a point; the Ayatollah had to have personally approved the IRGC’s terror spree as a political counterweight to Rouhani’s nuclear treaty.

To the IRGC’s delight, the Ayatollah gave Rouhani a deadline for him to circumvent the new sanctions (or end them) or else he would turn matters over to the IRGC. In May 2019, the deadline was up, but the Ayatollah was still waffling. Rouhani was the only one who had convinced the Europeans to drop sanctions and invest in Iran. By and large, the Iranian people recognized this. They saw Rouhani as evil, but the lesser of two evils when compared to the totally corrupt IRGC.

The primary reason the IRGC stayed so close to power with the Ayatollah was that many, if not most, of the clerics in Iran had become financially dependent on the IRGC, and everyone on the street knew it. Moreover, the Iranian people want their dwindling tax dollars spent on domestic issues, not wasted on more of the IRGC’s foreign military adventures to prop up Assad’s dictatorship in Syria, or finance the IRGC’s terrorist groups in Yemen, Lebanon or Gaza.

Our Jaunt to Jordan // There were moments when it was...