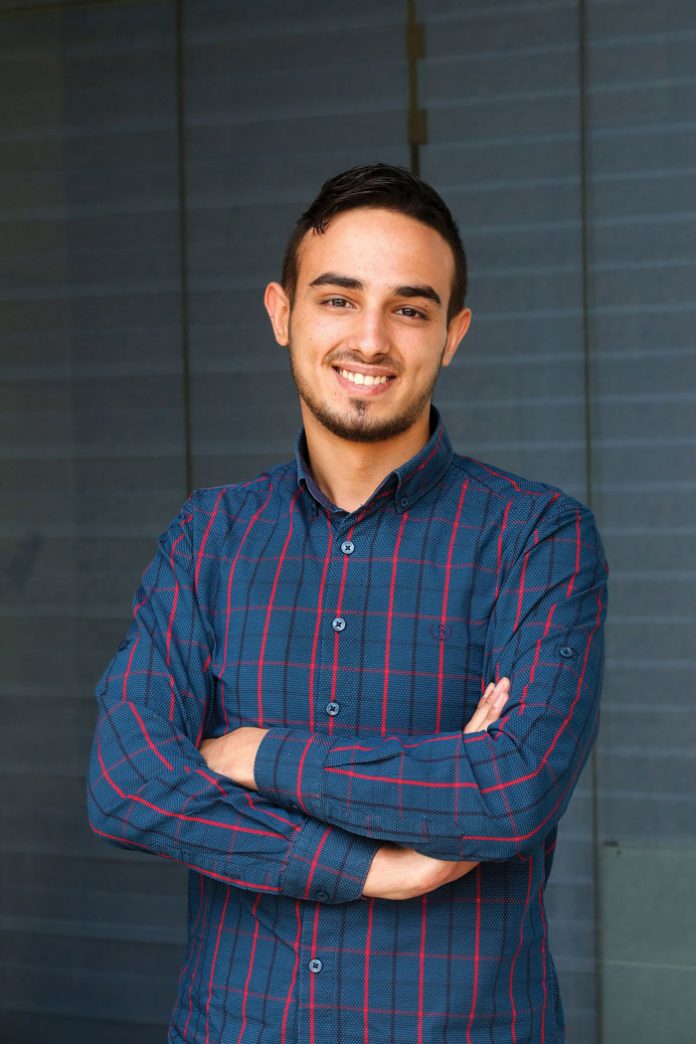 It’s a sight we’ve seen before: an effective and appealing speaker advocating for Israel, the country that he is a proud citizen of, facing off with pro-BDS activists attempting to interrupt him. But unlike other speakers, Yahya Mahamid, who represents the Israel-advocacy organization StandWithUs, is not a Jewish Israeli. Instead, he’s an Israeli Arab, from a Muslim background.

I met with Yahya last week at the StandWithUs Leaders of Tomorrow gala in New York City. It’s clear right when you meet him that he’d do well as a public speaker for Israel, despite the intense opposition that many such speakers face when they step onto a stage. He’s open and gregarious, but still skilled and calculated in his answers to tricky questions.
And Yahya has been doing plenty of stepping onto stages recently, as part of a StandWithUs campaign involving its American, British and Canadian offices.

He described his itinerary to me: “I spoke in London on campuses. I had a community event in Leeds and spoke to the Hillel group on campus there. Then I continued north to the city of Edinburgh in Scotland to have an event in the university there.” Then it was on to Canada. “We were in Toronto, Montreal, Winnipeg and Vancouver. We spoke to around 2,000 or 3,000 people, on the Canada tour.”

And he’d been in the US for two weeks by the time he was speaking to me. “We spoke in Atlanta, Athens, Chattanooga, then we went to North Carolina and spoke in universities. Then I went from Florida to Washington and spoke at Capitol Hill with an organization called Emet. We had 50 attendees, mostly staffers of other congressmen.” He said that some had mentioned that they would be bringing up his points with the congressmen in whose offices they worked.

After New York, he told me, he would be heading to Massachusetts and then Los Angeles. “I’ve been living out of a suitcase for the past month and will be for another month, but I love it,” he said.

Yahya has been working for StandWithUs since January of 2016, but he had volunteered for them for a year prior to that, and it’s clear that he has deep determination to promote Israel and defend it in the public arena. That’s even clearer from the fact that he will soon be leaving the organization to join the IDF in a combat unit.

What causes an Arab Muslim from the village of Umm al-Fahm—a stronghold of the anti-Israel Islamic Movement in northern Israel just south of Haifa and Nazareth and the largest Arab city in the area—to take on these challenges in defense of Israel?

“The anti-Israel atmosphere in the town was so strong. There were swastikas; we got no education on Jewish history, and the only line I got about the Holocaust was Hitler did a good thing. That was from my religion teacher. So I grew up very anti-Israel.

“When I was in high school, I walked into this new class and there was a map of the entire world and it didn’t have the State of Israel on it. Instead, it said Palestine. This was an Israeli school. Even though I was anti-Israel, I didn’t find it justifiable not to be there. So I took a picture of this map and publicized it, and two days later the map was gone. That was the first step I took on this path without even realizing what I was doing.

“What really made it happen was when I went to work in Tel Aviv. I was very nervous, because we were taught we’d be treated in a racist way and the Jews were not going to be nice to us and we’d be second-class citizens. I didn’t speak Hebrew at the time. Every day I’d come back home and think, ‘What just happened? They were nice to me. Why are they nice to me?’

“The big thing happened just before Sukkot. I had finished a 12-hour shift and was dead tired and went to wait for my bus to go up north. This Chabad guy approached me and asked if I can put on tefillin in the morning. Before I could answer, he starts telling me how important it is to shake lulav and say the blessings.

“I had a big smile on my face and said to him, ‘I’m sorry to waste your time, but I’m not Jewish.’ What he said to me remains with me until today.

“He said, ‘You’re not wasting my time, because it doesn’t matter if you’re Jewish or not; you have to be a good person.’ Very simple words, but it kind of contradicted everything I was taught growing up.

“From that moment on I started developing my own opinions. I worked in the hotel for a year and during this period I began recalling different episodes. My first interaction with a Jew was when I was seven. I was in the hospital in Afulah visiting someone. I ended up going to the waiting area and I saw a religious man with his wife and kid. I was very nervous because I didn’t speak Hebrew and my mother wasn’t there. I just cowered in the corner of the room without saying anything.

The ExPress Sec // For some it was refreshing. Others saw...

Anti-Semitism and Antivaxxers // Does the new ban in Rockland County...