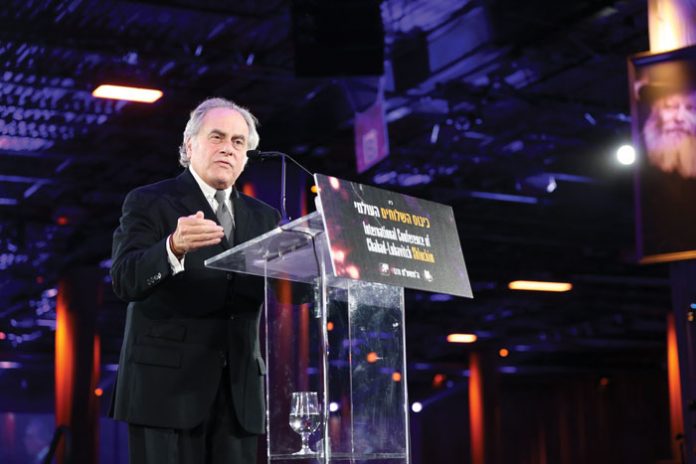 I heard that your speech last night at the Kinus Hashluchim was fantastic. You addressed thousands of rabbis. What were your impressions?
I’ve attended the Kinus Hashluchim for the past few years, and every year I am even more impressed than the time before. This year I was privileged to participate in the program, and it was a real honor to be asked. Having grown up right next door to Lubavitch headquarters at 788 Eastern Parkway [now the annex to 770], it was quite a stroll down memory lane, as I mentioned in my remarks. I used to see the Rebbe almost every day. As a little boy, we would stop whatever game we were playing when the Rebbe passed by so we wouldn’t accidentally run into him or throw a ball in his direction. Last night was also a bittersweet experience because my brother, Rav Aharon, wasn’t there to share the moment with me. I think he would have had a lot of nachas.

Of course. He grew up there as well.
Right. We slept in the same room towards the back of the building, which was right above where the farbrengens used to be. We could hear the farbrengens from our bedroom.

Did you ever imagine that Lubavitch would one day expand into the worldwide movement it is today?
I don’t know if anyone aside from the Rebbe had that vision. When I was a young man, Chabad was an important part of the Jewish community, but no one except the Rebbe could have ever expected it to expand into the international organization it is now. One of the most breathtaking moments of the annual Kinus is when Rabbi Moshe Kotlarsky [vice chairman of Chabad’s outreach arm] reads the roll call of shluchim from countries from A to Z and every one of the 50 states, as well as places where they are at great risk and endure severe hardship. These people deserve a lot of credit.
In recent years I’ve also become a big advocate and fan of the Aleph Institute, which does incredible work with Jewish military personnel stationed in faraway places as well as Jews who are incarcerated. I spoke at the Aleph dinner in Los Angeles a couple of years ago, and as I mentioned there as well as last night, what’s incredible about Aleph is that they don’t just care about the inmates but they also take care of their families, who are often disenfranchised and left behind with literally nothing. Aleph steps in and takes these “living widows” and children under their wing not only financially but by giving them the emotional courage to go through their terrible ordeal. That’s only one of a number of reasons why I’m a big fan of Chabad.

Another amazing thing is that Orthodox Jews and even Rebbes have a place to stay when they’re traveling.
Chabad has become a stopping point for almost every Orthodox business traveler or student. My grandchildren hiked across Europe the past two summers, and whenever I asked what they were going to do for Shabbos they said, “There’s a Chabad House nearby and we’re going to eat there.” It’s really quite remarkable.

I recently interviewed someone who ended up becoming frum and joining a very different community, but he initially became close to Yiddishkeit through his local Chabad House.
There must be thousands of people like that we don’t even know about. One of the people who spoke last night at the Kinus was a young kid who was in the Peace Corps in Ghana when he met the local Chabad rabbi. At the time he had zero connection to Yiddishkeit, and now he is more or less shomer Shabbos. It was quite a moving night. To be honest, at the end of the evening, when there were 6,000 people singing and dancing together, it was a very uplifting scene. I also had a very interesting experience when hundreds of people from France wanted to take my picture. I have a certain reputation among French Jews because a few years ago, when I was defending a prominent French politician, the case had to be postponed when I went to Eretz Yisrael for an emergency, which greatly impressed them. They thought it was an enormous kiddush Hashem that I went to Eretz Yisrael despite what was going on in the case.

The Fight for the Garden State // New Jersey Governor’s Race...

Death Watch In North Korea: Are the leaks about Kim Jong-un’s...