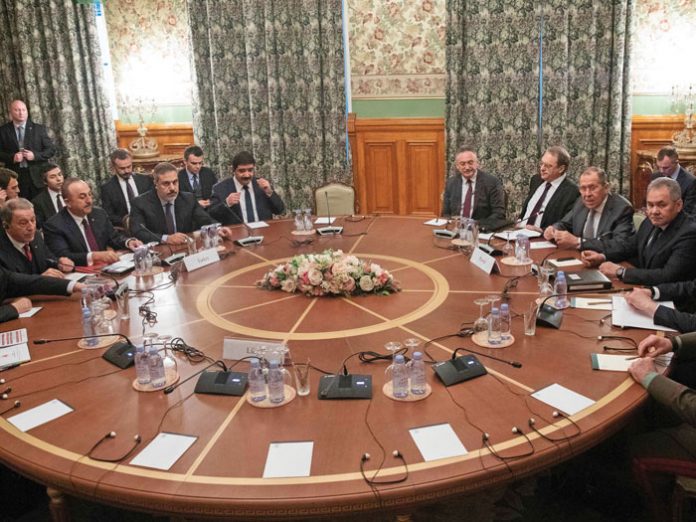 Back in the 1800s, the British called their geopolitical strategy to keep Russia out of Afghanistan the “Great Game.” Queen Victoria discovered from the body counts that the Russians were by far the better players. While the British forces were tricked into rushing to one region of Afghanistan, Russian’s proxy armies attacked another. They keep playing the same trick, and we never seem to learn.

In 1956, the Russians encouraged the Egyptians to nationalize the Suez Canal. The British and French inveigled the Israelis into invading Egypt as an excuse to retake the canal. The debacle diverted world attention from Russia’s brutal invasion of Hungary, which was the reason the Kremlin had pushed the Egyptians to create a simultaneous distraction in the Suez.

The more things change, the more they stay the same. In May of 2019, with his right hand, Putin asked his Iranian proxy forces to create a distraction in Iraq. While the American Sixth Fleet was shuttling both Mediterranean carrier groups eastward to confront Iran, Putin waved his left hand, and his proxy Erdogan sent the Turkish navy in the opposite direction, to the western Mediterranean, with enough troops and arms to take over Libya.

Sending ship after ship filled with soldiers and weapons from Turkey to Libya is a flagrant violation of UN resolutions, but no one was able to enforce it. There weren’t any battle groups from the Sixth Fleet to stop and search Turkish vessels in the western Mediterranean because all US forces were rushing to meet a perceived threat from Iran.

In hindsight, it is clear that the Kremlin ordered its two-front strategy of distraction and deception to begin simultaneously in May 2019. I doubt even Putin planned for things to escalate so quickly on both fronts.

In May, Putin reversed his earlier policy and allowed Iran to attack Israeli and American forces operating in Syria and Iraq. Iran used its Shiite proxy militias to fire four missiles from Syria into northern Israel while its Iraqi militias rained more than 30 missiles on a base in Iraq, killing an American contractor. Predictably, the Americans responded with airstrikes against Iranian militia bases in Syria, prodding more Iranian counterstrikes against American bases in Iraq.

NSA intercepts revealed that IRGC General Qasem Soleimani and his Iraqi Hezbollah colleague were planning a lengthy series of strikes against American diplomatic and military personnel. Included were Soleimani’s directions to the proxy militias to attack the American Embassy compound in Iraq. Attacking US soil inside the Baghdad Green Zone would be a not-so-covert act of war by Iran.

Soleimani’s reckless movements in Baghdad were betrayed to the Americans by his political rivals in Iran. Some say the betrayal was approved by the ayatollah himself. Soleimani and his entire entourage were taken out by a drone strike en route to the Baghdad airport.

While the world looks east with horror at a potential (but now unlikely) war with Iran, a real war is taking place in Libya, but nobody notices.

In May 2019, a former CIA asset with American and Libyan citizenship was closing in with his rebel army on the Libyan capital of Tripoli. His success was stopped by the arrival of tons of Turkish arms. The illegal weapons shipments turned the tide of the war.

By June 2019, the retreat to Benghazi had begun. The weakened legitimate government in Tripoli was now reduced to a proxy of Turkey, which is exactly what the Kremlin wanted. There was little chance that the United States Navy would split its forces to resist the Turkish takeover of Libya while the Sixth Fleet was focused on Iran.

I am not surprised by recent simultaneous events in Libya and Iraq. Perhaps Putin has outsmarted us. Perhaps it was inevitable that we would blunder into yet another series of wars with yet another set of Muslim nations.

Our Treasure // The loss of Rabbi Dr. Abraham J. Twerski,...

What No One Told Me Before I Got Divorced // Some...