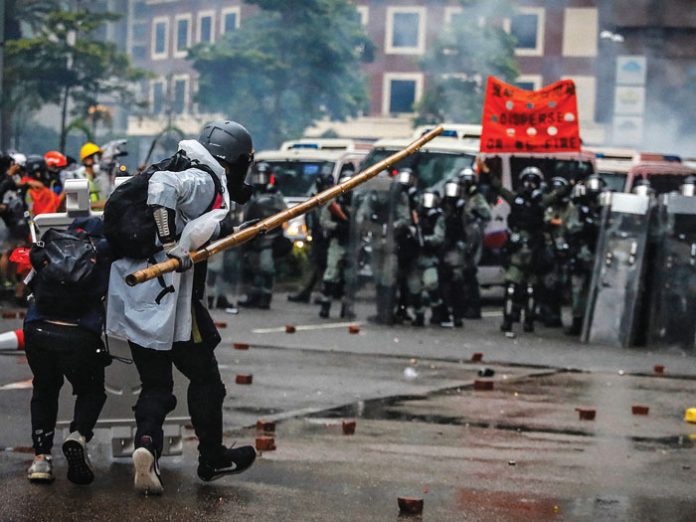 The allegedly wise people who dwell high above Earth in the airy clouds of Langley or under the Foggy Bottom of Washington, DC, have convinced themselves that the Hong Kong protests—which have been going on for 13 violent weeks—are nothing to worry about. They figured that once the kids would go back to school the protest season would be over. Seems logical.

Among the poor and working classes (which are almost the same thing in Asia) there is a desperate parental drive to view children’s educational attainment as the only sure path to upward mobility for the family. Asians take education very seriously, so maybe the CIA were on the right track in thinking that the school year would bring an end to the protests.
Would that they were right, but as a devout contrarian, I see many signs pointing in the other direction. The protests will not end because the Chinese government does not want them to end. They will never end as long as Hong Kong is free—or at least economically independent from China.

The protests will continue to be organized by a legion of agents provocateurs secretly paid by China to incite the formerly peaceful protests into violent riots that could wreck the stability of the Hong Kong economy.

A year ago, the kids were tricked into staging a protest march through what they thought was an elite neighborhood for government officials. It turned out that the neighborhood was actually inhabited by families of Chinese organized crime known as the Triads. These criminal gangs launched a bloody attack on the protestors as they were arriving at a local train station. A year later, the quislings of the Hong Kong government claim there are still no leads to identify the perpetrators who attacked the kids.
Sure.

Behind the scenes, China has been playing puppet master to a paid cadre within the protest movement. These agents provocateurs are paid to ensure that the protests keep spreading to more targets and grow more and more violent. The Hong Kong kids themselves have not chosen anyone as their protest spokesman. In fact, they have no organized leadership at all with the power to authorize or forbid a specific protest target. Everyone is trusted to decide for himself and to do the right thing.

That is the flaw that Chinese intelligence services are exploiting to the fullest. If no one is in charge of the protests, anyone can appoint himself a leader. Anyone can organize a protest—even a violent one—that harms the very good cause for which the good kids were protesting in the first place. On August 24, 2019, a small group of agents provocateurs succeeded in inciting a riot that forced the police to use tear gas. It was only a small part of a larger pattern of harm incited by outside agitators pretending to be residents of Hong Kong.

On that same Saturday, someone else pretending to be a student leader in Hong Kong used Telegram, an anonymous social media platform, to call for yet another protest aimed at shutting down the airport. The protestors were told to use many different means of getting to the airport—bicycles, taxis, trains, private cars, buses. No one would be able to intercept the protestors, or even see them coming, if they all took different routes to the airport. The goal was to clog up all the transportation connections to the airport, thus ensuring its closure.

The protestors and paid agitators both discovered to their horror that their anonymous Telegram software was not so anonymous after all. The police were waiting at the airport and transportation terminals to turn away anyone without a plane ticket or passport. Frustrated, the kids went home. The black-masked paid agitators were left without a crowd to hide in. Maybe next time, Beijing’s agents will succeed in provoking riots that will close the Hong Kong airport for good.

Turx: “I’m hopeful that the White House will meet with Jewish...