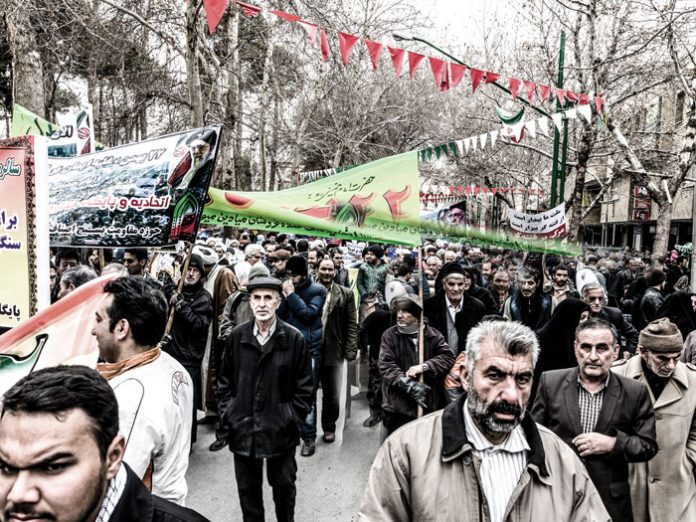 There was a funny story recently about an Iranian military officer who claimed to have caught lizards that were trained to spy on Iran’s nuclear projects. The officer claimed that Western spies had used the lizards to “attract atomic waves” through their skin. Now, this would be very funny except that the nutty officer was a former chief of staff of Iran’s armed forces and currently serves as an advisor to the ayatollah, the head cleric in the religious dictatorship that oversees the Iranian government. Hassan Firouzabadi, senior military adviser to Supreme Leader Ayatollah Ali Khamenei, was responding to questions from local media on the recent arrest of environmentalists.

“Several years ago, some individuals came to Iran to collect aid for Palestine… We were suspicious… In their possession were a variety of reptile desert species like lizards, chameleons… We found out that their skin attracts atomic waves and that they were nuclear spies who wanted to find out where inside the Islamic Republic of Iran we have uranium mines and where we are engaged in atomic activities,” he said.

Uh, well, someone should tell this paranoiac that Iran has very little in the way of natural deposits of uranium ore, and the location of its few mines has been known for years. No secrets for the lizards to find even if they did have Geiger counters for skin, which they don’t.

In the Middle East, one never lets facts interfere with a good story. Especially if you can claim that the Israelis were behind the atomic lizard espionage. Even better, Israeli bird spies! “In January 2016, Lebanese residents captured a griffon vulture wearing an Israeli tracking device, but released it upon realizing that the transmitter strapped to the bird was intended for scientific research rather than espionage. Twice in recent years, Turkish media has highlighted allegations that birds tagged with Israeli university tracking devices were on espionage missions. In 2012, an eagle with an Israeli tag was captured in Sudan and alleged to be a Mossad spy.”

Yeah, you got to be careful about those flying Israeli spies. Even more careful about the Mossad’s underwater espionage: “Two years earlier, an Egyptian official said Israel-controlled sharks may have been involved in a number of attacks on tourists in the Red Sea. Several months earlier, Hamas claimed to have caught a dolphin wearing Israeli spying equipment.” Flipper with a spy camera!

Distracting the Base
Now, seriously, what is wrong with the Iranians that they come up with this crazy stuff? Spying lizards, indeed. It may sound funny, but these episodes are typical of a propaganda war that masks the polite civil war raging behind the scenes among the Iranian elite. The right-wing clerics depend upon the uneducated rural population of Iran as their base. The leadership feeds them loony fables about animal espionage to keep the base ramped up about evil Israel and to keep them from asking questions about why the Iranian economy is in such bad shape now that sanctions have been lifted by the Great Satan (which would be us). You can only use the spying lizard gambit so many times before it loses its shock value with the Iranian public.

The rural base refuses to be distracted and wants to know why prices are so high, the job market is so low, and the clerics are so wealthy. The Romans knew how to use bread and circuses to distract the mob. The clerics are only now realizing that stories about lizard spies just don’t fly anymore in Iran.

Entire Iranian cities have been severely damaged by earthquakes, and the government is spending only nickels and dimes to help fix them. The urban dwellers want to know where all the oil money has gone. What happened to the economic dividends from the end of sanctions? The answer is that the clerics and their Revolutionary Guard (IRGC) allies have been spending lavishly to start wars in Lebanon, Syria and Gaza but don’t care about the citified liberals back home. The over-educated elite in Tehran never vote for the clerics anyway. Those college brats were never their base.

The rural population has always depended on agriculture for sustenance, but incompetent bureaucrats in the clerical regime have all but destroyed the market for home-grown food by subsidizing foreign imports at prices so low that Iranian farmers cannot compete. The entire Iranian agricultural system has been destroyed. But the base did not care as long as they had food stamps and subsidized gas cards. Nobody rebels when gas is five cents a gallon. But when oil profits fell due to fracking and other unnatural events like sanctions, the clerics lacked the revenue to continue handing out subsidies. Belt-tightening as a result of American sanctions was the order of the day, and the patriotic people of Iran accepted the cutbacks.

But then the sanctions ended and the subsidies were not restored. Worse, food prices rose as household income fell. It had to be a conspiracy by the clerics to steal the profits that were expected from the end of sanctions. The people began to riot. The ungrateful base was intent on biting the hands that used to feed them. The clerics ordered the army in, blaming the riots on the Great Satan.

The truth is that the sanctions dividend had been diverted by the clerics to fund their foreign adventures. Since sanctions ended, the Iranians have increased their funding for terrorism. Doesn’t that show that Iran is openly violating the Obama nuclear deal? Nah, an end to terror financing was never part of the deal. Nor was ending Iran’s missile development, as much as Trump grumbles otherwise. The hard fact is that the Obama deal is not a good deal, or even a great one. It is only the least dissatisfactory option that the Iranians would accept. But only for ten years’ worth of restrictions, and then the deal is over. So why have a deal at all? Because it absolutely guarantees that for the next ten years, Iran will halt all efforts to produce a nuclear weapon. A decade is a lot of time.

The behind-the-scenes Iranian civil war may be over by then, bringing a new political order to power. Time will tell if buying time was worth lifting sanctions. It will have been worth it if the moderates in Iran, like Prime Minister Hassan Rouhani, continue to remove the ultra-conservatives from power: “Rouhani is viewed by many in the West as more moderate than his predecessor, Mahmoud Ahmadinejad, and he promised his voters to restore the country’s economy and to improve ties with the international community, raising hopes regarding nuclear talks between Iran and world powers.”

The “Twitter Files” on Hunter Biden // What did the...