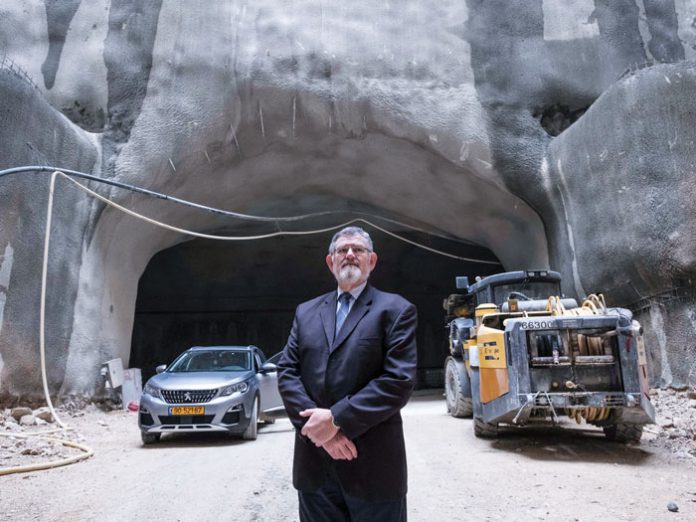 We’ve been waiting a long time for the arrival of the special vehicle that will take us to our next destination. According to the safety rules, the vehicle must be solar-powered, as gasoline could potentially cause a spark that would ignite an explosion inside the mountain under excavation that we’re about to enter. That is not a pleasant thought, considering that thousands of conventional cars are driving over the mountain every hour.

Worried that his plans to take us on a private tour will fall apart, the manager of the site, Rabbi Chananya Shachor, is relieved when the vehicle finally arrives and we climb on board. The road curves up the slope of the mountain and suddenly, without any warning, we are entering a huge tunnel whose ceiling looms far above us. The wide, multilane roadway continues deep into the depths of the earth. We are accompanied by a deafening thundering noise as we proceed.

The sight in front of us is breathtaking. The tunnel leads directly into a 50-meter-high space—the height of a 15-story building. This is the entrance to a huge subterranean hall that rises to a height of dozens of meters and is supported by giant pillars. Yellow bulldozers maneuver along the walls, but the immensity of the space dwarfs them and they resemble tiny grasshoppers gnawing at the perimeter of the hall. Above them are orderly rows of round cells that fill the walls like a huge beehive. A cement mixer pours its concrete into spraying machines that, in turn, will cover the walls with a gray concrete slab. Other vehicles move along the edges of the space, drilling round holes into the walls. Below, supervisors keep watch on the goings-on, and engineers run around with their drawings calling out instructions as needed. They, too, look like ants lost in an out-of-scale environment. From this main hall, other tunnels spread out like huge arms.

This awesome sight looks like something out of science fiction but is actually the largest mining project in Israel. The project is not exactly a secret, but it is not well known either. It is being carried out at a feverish pace right under the feet of the thousands of people who travel to Jerusalem each day, as well as the visitors to the cemeteries of Har Hamenuchot and Har Tamir. If you are driving to Jerusalem, you’d be surprised to know that there are huge excavators and many workers digging the largest underground structure in Israel beneath you.

But the most fascinating thing about this huge and innovative project, at least according to its designers and planners, headed by Shachor, is that it is simply a return to the days of our ancient sages, Dovid Hamelech and the Sanhedrin. Shachor, a man who combines pleasantness with determination, is a seventh-generation member of the chevrah kaddisha of Jerusalem, the largest chevrah kaddisha in the Holy City. “The idea is to return to the days of our chachamim who buried their dead in caves. It’s a solution that is acceptable to all opinions, and one that will solve the problem of the shortage of graves in Jerusalem. We are setting up an infrastructure to accommodate some 25,000 graves, and we will be able to expand it even further in the future.”

Years ago, as the beis hachayim in Sanhedria was reaching capacity, work began on Har Hamenuchot, located at the entrance to Jerusalem, for use as an alternate burial ground. The three burial societies share the mountain, with the lion’s share going to the chevrah kaddisha of Jerusalem. Shachor began his affiliation with them many years ago, following in his father’s footsteps, and slowly worked his way up until he was appointed as its director several decades ago. “I see this business as a mission, a true act of kindness, even though I am mainly involved in management. It isn’t easy to be busy all day with the dead and dying. When you make Havdalah on Motzaei Shabbos you say ‘Baruch Hamavdil.’ I, however, say ‘Baruch Dayan Ha’emet’ because immediately after Shabbos I am flooded with requests from people asking for help in burying their loved ones. My days are filled with painful and heartbreaking events, but I have a rule that I never bring my work home or discuss it. I have to maintain a private corner where I can deal with life.” 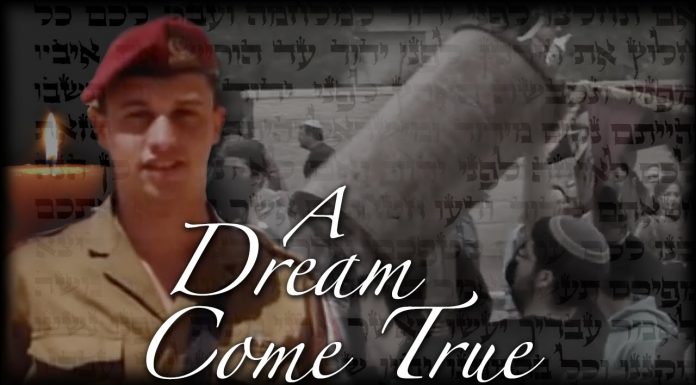 Could Hitler Really Have Survived the War? // Historian Luke Daly-Groves...