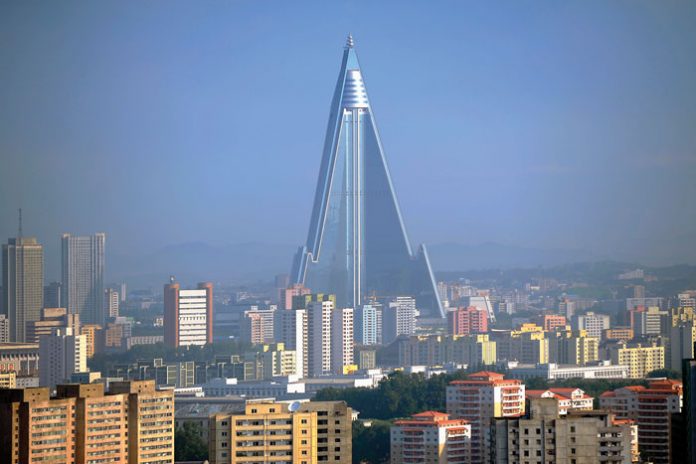 And they said, “Come, let us build ourselves a city and a tower with its top in the heavens, and let us make ourselves a name.” (Bereishis 11:4)

That was Bavel, but it could also describe Pyongyang, which boasts a tower that scrapes the city’s skies. The tower often gets lost in the clouds and is visible from everywhere in the city. It dominates the skyline of the city from my hotel window; you can’t escape it. It looms over the low-rise houses of the suburbs and the tall buildings in the center of town. This huge edifice is a pointed pyramid that is said to be 330 meters tall (1,082 feet), containing 105 stories, with a brightly lit pinnacle that resembles an eye watching you wherever you go.

“What is this building?” I ask my guide, John, as we tour the city. “It’s still under construction,” he replies. “When it is completed it will be a hotel.” In fact, this structure illustrates how things are done in Pyongyang. Construction on this project began in the 1980s when Kim Il-sung learned that the Stamford Hotel had been built in Singapore and it was declared the tallest hotel in the world. The news made the headlines everywhere. What rankled Kim was that a South Korean firm, which was receiving international acclaim for its work, had built the project. That was unacceptable to the prickly North Korean despot, who declared that North Korea would have an even taller hotel. The fact that tourists rarely visited North Korea’s capital, and there was therefore no need for a monstrously large hotel, was of no concern. Kim would see that it was built. He recruited investors, and the structure began to take shape. But in 1992, disaster occurred when the Soviet Union—Kim’s primary ally—collapsed, and Russian cash stopped flowing to Pyongyang. The $100 million project came to a halt. Since then, the building site is abandoned, surrounded by fences and boarding. Not too long ago, an attempt was made to have an Egyptian company restart the project—considering their experience with building pyramids—but they had little success. The building, officially named the Ryugyong Hotel, is known as the “Hotel of Doom,” and has never registered a guest. So instead of having the record for building the tallest hotel in the world, Kim’s legacy in the record books is for the world’s tallest unoccupied building.

Of course, I did not hear any of this from John. Instead, he gleefully boasts, “You know it’s one of the tallest buildings in the world. This is an achievement for Korea and proves our strength. There is no such structure in your country. It is too hard for you to build.”
In the West we build buildings because they are needed, not to prove a point. “No,” I agree. “We have nothing like it.”

In this past week’s parshah we read about the dor haflagah, the generation after the flood that knew only one language, one culture, one goal: to build a tower that would reach the heavens, and they were punished by being dispersed across the globe. The commentators give various explanations as to their actual sin in building this tower.

Here in Pyongyang, I recall the peirush of the Or Hachaim Hakadosh, who speaks of how reinforcement of social uniformity leads to the abnegation of the individual. I see it here everywhere: the rows of morning walkers joylessly striding with their heads bowed; the children marching like soldiers, all dressed in their identical uniforms. Koreans generally seem to walk in lines; wherever there are more than two Koreans they walk one behind the other. In one place I noticed an unusual line of people in a public square. Instead of winding in a serpentine—back and forth—as would be expected, this line was a precise square. Everything here is orderly in an artificial way. Compliance with social order here can become a matter of life and death. We, the tourists, are constantly being observed to make sure we do not stray from the permitted constraints that have been established for us. Building the Ryugyong is a proclamation of totalitarian power over the subjugated society—a true pyramid where one ruler reigns, unquestioned, from the peak. While society is important to Jewish culture, it cannot be to the detriment of the individual, who is an integral component of the social mosaic. 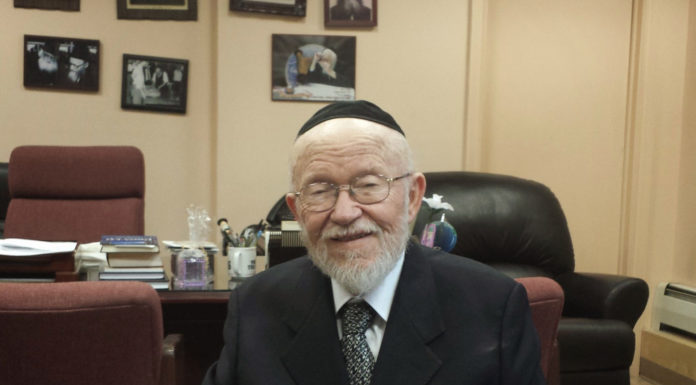 Hezbollah’s Hardly Broke // The terror group has no money worries, thanks to the drug trade.

Before They Disappear Forever //A conversation with a German photographer who...