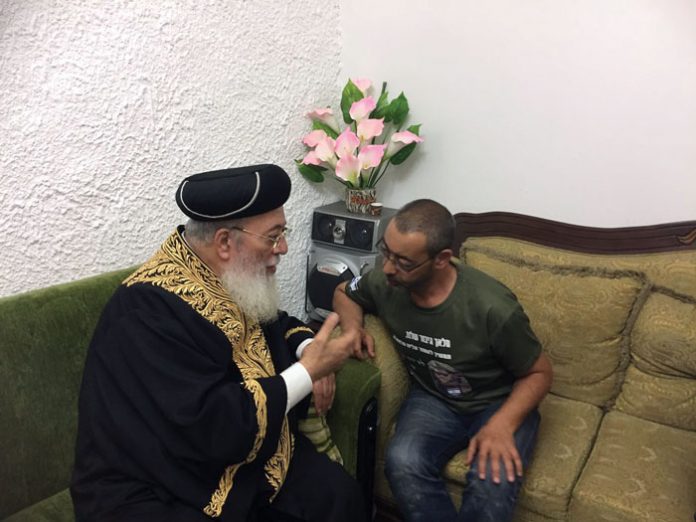 “My son, Youssef Othman, was murdered by a Palestinian terrorist a few weeks ago,” Aryeh Othman tells me in fluent Hebrew during my recent visit to pay my respects. “He was 25 years old. At the funeral, half paralyzed with grief, I followed my son’s coffin to the cemetery at the edge of town, along with the many others mourning the cruel death of a young man in his prime. When we reached the freshly dug gravesite, I asked to be left alone with my precious son so I could place the marker on his grave.

“I opened the coffin and looked at my son’s pure, tranquil face. His eyes were half-closed, appearing neither asleep nor awake. He had slept like that since he was a child. I could never tell if he was sleeping, so I was always careful to tiptoe whenever I walked past his room so as not to wake him. Seeing his face for the last time, I decided to awaken his soul. I kissed him on the cheek and whispered into his right ear the eternal prayer ‘Shema Yisrael Hashem Elokeinu, Hashem echad.’ Then I whispered it again into his left ear. I kissed him one more time and said goodbye. I know that when his blood was spilled by the cursed sons of Amalek, his soul ascended directly to Heaven as he had devoted his entire life to saving people’s lives and keeping them out of harm’s way.”

What could be more heartbreaking than a father burying his murdered son? But there is so much more to this tragic story.

“People call me Aryeh, but the name I was given at birth is Issam; it is still my legal name. I live in the Muslim village of Abu Ghosh, not far from Jerusalem. The cemetery in which my son was buried is the resting place of many generations of the Othman family.

“As you can see, my house looks like any other home in the village, with the exception of a photo of my son in his IDF uniform hanging on the wall. It is right next to a framed pastoral scene of a stream with a deer frolicking in a meadow, above which appears the verse written by David Hamelech: ‘Barchi nafshi et Hashem, may my soul bless G-d.’ I bought it in a store in Jerusalem because it reminded me of the many kindnesses of Hakadosh Baruch Hu. Even now, in my great pain, I look at the picture and say to Him, ‘I accept Your judgment and thank You for every moment I had with my son. Each time I saw him smile was a privilege.’

“For the last seven years I have been working as a security guard at the synagogue of the famous maternity convalescent center in Kiryat Ye’arim [Telz Stone], which is very close to Abu Ghosh. The residents of our village were among the first locals to sign a pact of cooperation with the Jews, even before the establishment of the State of Israel. Many of our young men volunteer for military service in the IDF, and some even serve in Israel’s intelligence agencies.

“The residents of Abu Ghosh are not of Arab origin; we are originally from Chechnya. We arrived here hundreds of years ago when the region was under Ottoman rule. We do not feel ‘Palestinian’ and have no ties to them. When the president of Chechnya visited Israel several years ago, he came to Abu Ghosh and offered us Chechen citizenship, but we rejected his offer. We prefer to remain Israeli citizens. Nevertheless, the president presented our village with a gift—a big new mosque complete with beautiful minarets, built in the architectural style of the Caucasus.

“This historical difference from our neighbors led us to support the Jews in their struggle for a homeland, and we assisted them during the War of Independence. That’s why we are the only non-Jewish settlement remaining along the main road from Tel Aviv to Jerusalem. Everyone else was expelled after fighting against the Jews.

Honey Money // Honey might be the only food that never...