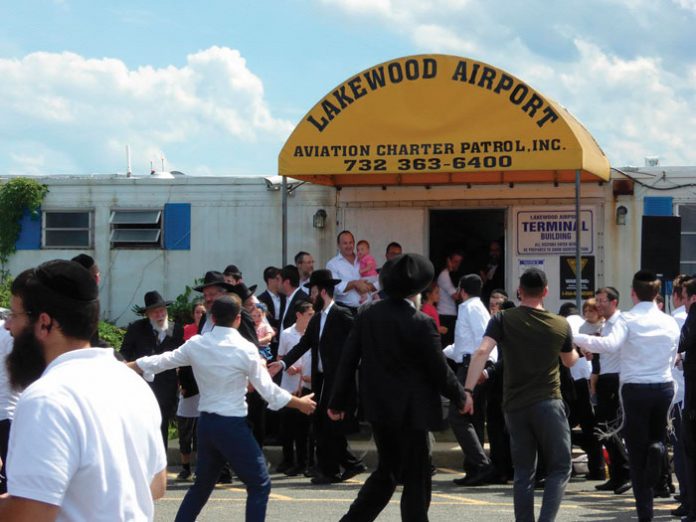 A crowd of hundreds of individuals stood together at Lakewood’s small, private airport on Sunday afternoon as they waited with eager anticipation and excitement for a helicopter to land. As soon as the helicopter touched down and its passengers appeared at the doors, the crowd broke out into a spirited rendition of “Chasdei Hashem Ki Lo Samnu.” The passengers, Yitzchok and his father, were swarmed by friends jostling to hug them and welcome them back to Lakewood. The atmosphere was euphoric as they were raised on friends’ shoulders and the emotional singing of “Yodu LaShem Chasdo” rent the air.

Yitzchok, a bachur from Lakewood who learned in yeshivah in Eretz Yisrael for the past three years, was on his way home for Pesach. He had a flight on Thursday, March 16, with a two-hour stopover in Moscow. Unfortunately, those two hours turned into over three months as he became caught up in a legal nightmare.

Yitzchok had taken along with him a souvenir from Eretz Yisrael, which while legal to bring into America is not legal to bring into Russia. Yitzchok was unaware of this, and was wholly unprepared to be stopped and questioned by the Russian authorities.

In fact, his package was in his checked luggage—not his carry-on—and he had no access to it while in Russia. Furthermore, he never left the airport itself, as he had no visa to enter Russia. Moscow was merely a “transfer” point for his trip, and was not even an official “stopover.” However, having something that is illegal in Russia in one’s luggage, even if Russia is just a transit point, is against Russian law, and the bachur was detained in the airport.

At most international airports, a finding like this would result, at worst, in the items being confiscated. However, the Russian authorities took the matter very seriously and placed Yitzchok in a holding cell. The language barrier also contributed to the fiasco. The authorities seem to have misunderstood him and thought he was aware of the law and was deliberately trying to skirt it.

Yitzchok was held in a makeshift holding cell in the airport for four days as authorities decided what to do with him. He spent his first Shabbos in Russia in these “accommodations.” He was then transferred to a pre-trial detention center, where he remained until his trial last Friday.

Members of the Chabad community, who had become involved in the case almost immediately, did their utmost to convince the judge to allow Yitzchok to be put under house arrest, but their attempts were unsuccessful. The authorities would not allow it because he didn’t have a visa to enter Russia. As askanim on the American side related, the Chabad community of Moscow took up Yitzchok’s plight and did whatever they could to help him. Rabbi Shaya Deitsch, a local Chabad , visited him every day, bringing him homemade food and doing whatever he could to make him comfortable.

Yitzchok’s rosh yeshivah in Eretz Yisrael, Rav Yehoshua Klaver, sprang into action as soon as the trouble began, and worked with the Chabad community to find a Russian lawyer to represent Yitzchok in court. At this point, in the early days of the ordeal, no one realized that the events would take weeks to unfold, and it was believed the matter could be worked out in a few days. However, after a few days passed and no resolution was in sight, it became evident that more askanus would be needed.

Against all Odds // Jared Kushner, senior adviser to President Trump,...