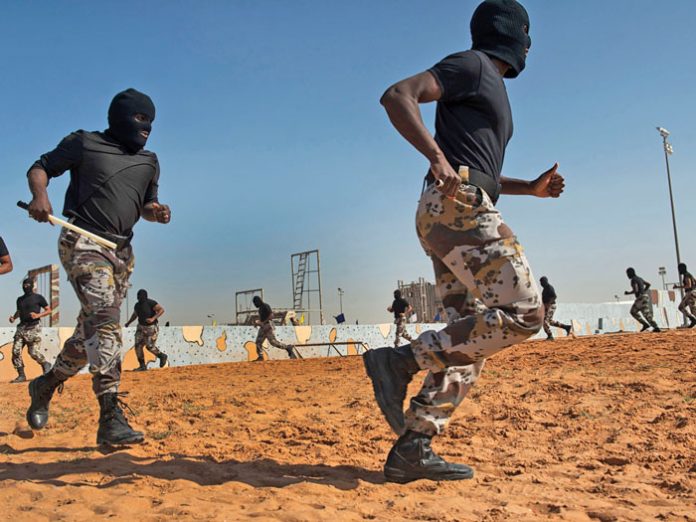 Since March 2015, the Saudis have convinced more than 40 majority-Muslim nations to join them in a mutual defense organization that seems to be an Islamic version of NATO. With a straight face, the Saudis have announced that their purported goal is to protect themselves and their fellow Muslim nations against terrorist attacks. Seriously?

I think the Saudis (who have launched more than a few terrorist attacks over the years) may have an agenda other than fighting terrorism. Conspicuously absent from this new Muslim self-defense group are the three Shiite-dominant states of Iran, Iraq and Syria.
At best, it is a ploy to intimidate Iran and force it back into its cage while achieving an undeclared cease-fire. At worst, cynics see this new Arab NATO as a Saudi attempt to reignite the ancient Sunni religious wars against the Shiites.

That is certainly how Iran views it. Iran has always seen itself as the religious hub of the encircled Shiite nations, perpetually battling its Sunni rivals for global control of the religion of Islam. The Shiites see the Sunnis as heretics because of the Sunni claim that the ruler of all Islam, the caliph, can only be chosen by a vote of all Muslim leaders.

Conversely, the black-turbaned Shiites of Iran believe that the caliphate is an inherited position. The leader of all Islam can only be a direct blood descendant of Mohammed.
That intra-Muslim squabble has lasted a thousand years and caused a hundred wars. Since Mohammed left no guidance about how his replacement would be chosen, there is no clear answer.

Among the many problems with the unpopular Iranian argument for a hereditary caliph is that Mohammed had no sons, only daughters. Most of the Middle Eastern cultures would never have considered the possibility of a female ruler of the new Muslim religion, even if she were the closest direct descendant of Mohammed. Even the Shiites agreed to skip over Mohammed’s wives and daughters in favor of his son-in-law, who was no blood relation at all.

During the Dark Ages, Islam was a beacon of enlightenment and equality for women. It did not last very long. The ancient Arab practice of “honor killing” was explicitly and repeatedly banned by Mohammed during his lifetime, but his ban was not specifically included in the Koran.

After his death, there was a backlash movement to restore the traditional subjugation of women among the Arab tribes. It took the Sunni Arabs a while, but they succeeded in restoring the tribal tradition of female subordination.

After strangling equality for women, the early Sunnis also dealt a fatal blow to the doctrine of hereditary succession when they murdered Ali, Mohammed’s son-in-law. This effectively ended Shiite demands that the caliphate must be reserved for direct descendants.
Notwithstanding the Sunni assassination of the last direct male descendant, the stubborn Shiites of Iran still saw their vision for Islam as far superior to that of the backsliding Sunnis, who folded their tribal customs into a twisted form of Islam.

In addition to its claim to the mantle of religious purity, Iran also sees itself as racially superior to the predominantly Sunni Arabs. Most Iranians (but not all) are from the Persian ethnic group that looks down on the nomadic Arab tribes as uncultured and illiterate barbarians.

The Persians may have had a point back in the bad old days of early Islam. But nowadays a person would be hard pressed to say whether the Arab Sunnis or the Persian Shias have greater responsibility for terrorism and trauma in the world.

I say a pox on both their houses. I would remind people that evil is not an inherited trait in Islam. There is no religious requirement or genetic predisposition to violence among Muslims. Whether Shia or Sunni, most Muslims are very peaceful, nonviolent people.

Senator Hatch’s Mezuzah // My “one degree of separation” from Senator...