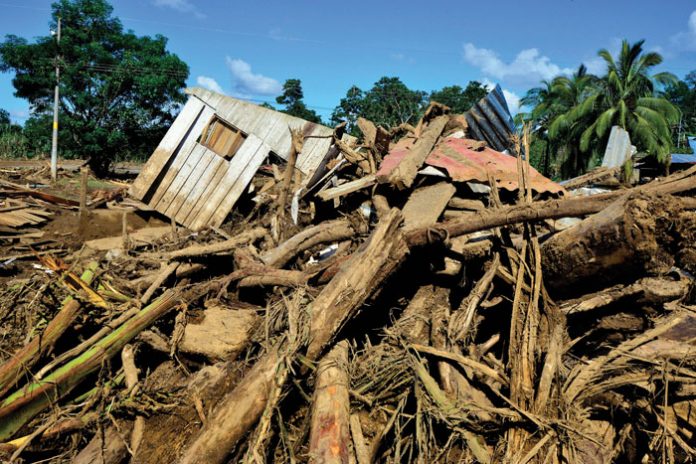 The truth is that our intelligence services know much more about global warming and hurricane risks than our weathermen do, but no one knows it. Maybe we don’t want to know that the world is getting scary hot. Maybe the news media has cried wolf too many times for the sake of ratings and Americans have a very short attention span.

In America, a hot news cycle only lasts two weeks. A decade is ancient history. Americans have little respect for either scholars or elders, and they disregard their institutional memory. Knowledge of the past is simply unfashionable in America. I think that is especially true for the American intelligence community.

Scholars like me are left on the scrap heap of history. It turns out, though, that it’s a pretty good perch during the high waters of a hurricane. Historians know that the west coast of Florida has a secret risk. Unlike the east coast of the United States, the Gulf coastline is both absurdly shallow and extremely broad. Think of a 20-foot-deep underwater sandbar, a super-wide underwater beach that stretches out 140 miles before it drops off the edge of a cliff into the deep sea of the Gulf of Mexico. This submerged west coast beach is a giant heat sink. That, as historians know, is part of the problem.

What these young weathermen don’t know is that our huge underwater beach stores the sun’s heat all summer. A mere 20 feet of water won’t shield the sea floor from the sun. By September, our sunbaked submerged sand bar has heated the shallow coastal waters to more than 90 degrees Fahrenheit (32 degrees Celsius). The hot water slowly spills over the undersea cliff a hundred miles off shore and eventually heats the deep Gulf waters, like pouring hot water into a tub.
I saw a young man on television say that the Gulf of Mexico was registering temperatures of 82 degrees at depths of 300 meters beneath the surface. That means the Gulf of Mexico is bathtub-warm almost down to the 1,000-foot depth level where the sun never shines.

Yes, it has. According to archeologists and anthropologists, deep water warming routinely happens every 500-1,000 years in the Gulf of Mexico, but that is “ancient history,” so the newbies don’t bother to learn what happens when this old phenomenon reoccurs. The native people who lived here knew what would happen even if they didn’t know why. They knew that sooner or later super hurricanes would come and push the coastal waters into a tidal surge. The tribes built shell middens, little hills of sea shells, so that the tribe would have a safe place to climb up on when the high waters came. Why? Because their ancestors told them someday they would need a place that absurdly high to avoid drowning.
All along the Gulf coasts of Mexico, Texas, Louisiana, Alabama and Florida, you can still see some of these ancient sanctuary places by the sea. The amazing thing is that all along the Gulf shore, the Native American tribes all built their shell middens to the exact same height. Their ancestors must have passed along the knowledge that every thousand years or so, a 50-foot high tidal surge will roll up on their beach. Those tribes that ignored their elders and did not build their shell sanctuaries more than 50 feet high all drowned. They and their shallow shell middens were all washed away.

St. Petersburg, where I live, had a “100-year-storm” in 1921 that pushed more than 17 feet of water into Tampa Bay and turned our entire peninsula into an island.

The earnest young weathermen were all talking about the “possibility” of an 8-foot surge in Tampa Bay. While that would have been devastating, it would have been no match for history. In the early 1800s, the waves from a “500-year-hurricane” blew the local lighthouse over and pushed more than 25 feet of water into Tampa Bay. The lighthouse keeper put his family in a rowboat and tied it to the top of the tallest palm tree to ride out the storm. He did not measure the height of the palm tree at the time, but 25 feet seems a rather conservative estimate to me.

A 25-foot surge would have put my roof completely under water. When my wife saw the possibility that Category 5 Hurricane Irma might hit our coast at an almost full moon high tide we knew there was nowhere safe to go but the airport.
Staying put would have been like playing Russian roulette with two bullets. You can chance it, but why would you risk your life? We are now playing with our grandchildren in New York.

The Returnee // Two decades ago Peri Cohen shocked the chareidi...