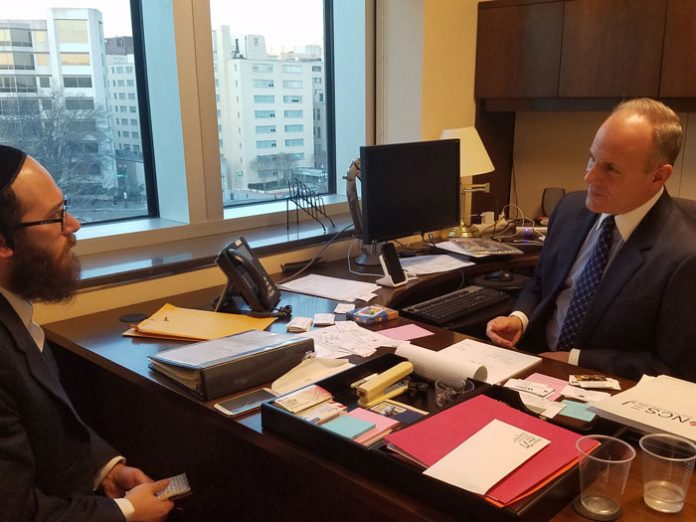 The date was mid-December, 2003. Mere months had passed since Saddam Hussein’s ouster from power. Iraq lay in ruins; its dictator was lying low in a spider hole. With barely a handful of Jews in Baghdad, there were even fewer stationed inside Saddam’s royal palace. Not many would be willing to risk lighting the Chanukah menorah in a public setting, and even fewer would consider doing so in Saddam’s own residence. But then again, none of those people were Elan Carr.

For Elan, a descendent of Jewish Iraqi refugees, this tour of duty in the land of his ancestors was like a homecoming. Lighting the menorah in Saddam’s palace was a powerful and defiant statement. But what else would one expect from the future US Department of State Special Envoy to Monitor and Combat Anti-Semitism?
When Elan and I meet at the State Department for this interview, the position of Special Envoy has been filled for barely a week. Elan has yet to have business cards printed up and there is practically no staff. But he does have a nice office and he’s got plenty on his mind to share.

“I very much hope to be a thorn in the side of the people who want to annihilate us,” he tells me after I congratulate him on his appointment. “I’m thrilled to fight for the safety of the Jewish people and carry the American flag while I’m doing it. There’s nothing better than that. It’s G-d’s work, and it needs to be done. I’m honored to have been selected. My whole career has been about keeping people safe. I became a military officer to keep our country safe, I became a criminal prosecutor to keep our community safe, and now in this role I get to fight for the safety of the Jewish people throughout the world. That’s a big honor.”

Elan draws strength from his longtime commitment to serve, protect and defend.
“I joined the United States Army in 2001, about six months before 9/11. I did it because I wanted to serve. I wanted to shoulder the burden of defending my country in whatever small way I could, and it felt good to do it. Then 9/11 happened and it wasn’t theoretical anymore. It was clear that we were at war, and I felt all the more privileged to be part of the apparatus that was going to respond and defend the country. I ended up being activated and sent overseas. I spent nearly a year in Iraq.”

“My background is Israeli. My mother served in the IDF, as did my cousins. So for me, military service wasn’t a foreign idea. It was something I’d grown up seeing as highly honorable and worth doing.

“Then when I was in law school in Chicago there was an adjunct professor who was a federal circuit judge, an appellate judge in the Seventh Circuit. I took one of his classes and we became friendly. He was a wonderful man, and he was also Jewish. I was in his chambers one time to discuss some course material, and I saw some photos of him dressed in a Navy uniform. ‘Judge,’ I said, ‘you were in the Navy!’ ‘Yes,’ he replied. ‘When were you in the Navy?’ I asked. ‘While I was a district judge.’

“I was shocked. ‘What? You were a United States district judge and you joined the Navy? Why?’ ‘Because I wanted to serve my country,’ he explained.

“This man was an Article III federal judge; how much more service could a person do for his country? And if he still felt the need to serve in uniform, then kal vachomer, how much more so should I! I resolved right then and there that I would also enlist. I didn’t want to make it a career, but I did want to help defend my country.”

These were all steps in a journey that would bring him to Saddam’s palace shortly after the Iraqi dictator had fled.

Grayer But No Wiser // The New York Times’ Orthodoxophobia seems...