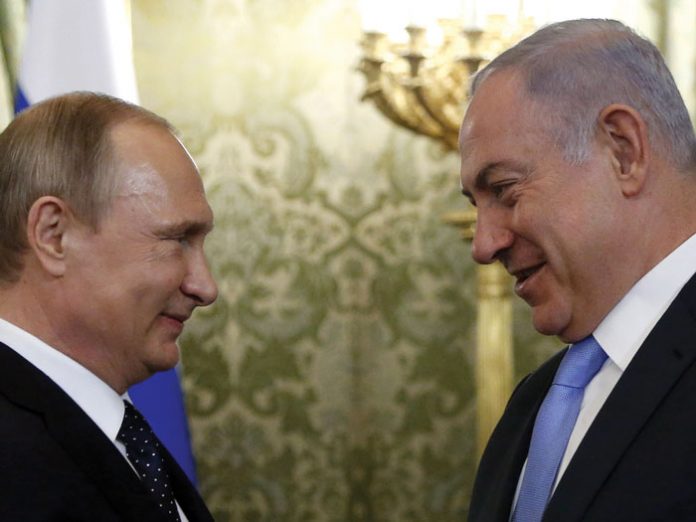 Sometimes I cannot sleep because my mind is racing to fit all the facts into a pattern that makes sense. I sat up in the middle of the night recently when the answer to an issue hit me. The Israelis were telling a small lie to protect a bigger secret. I emailed a friend in Israel with a single question: Is it true that the Russians told the Mossad where to find the Iranian nuclear archives?

You could almost hear an electronic sigh from Jerusalem. It was true. A decision had been made in a private meeting of senior Russian and Israeli intelligence leaders that it would be in the best interests of both nations to expose the Iranian research and development of nuclear weapons. The Russians told the Israelis where to find the hidden evidence.

I understood the enormous sensitivity of what I had uncovered. The Russians had betrayed their own ally, giving the Iranian government’s most closely guarded secrets to their mortal enemy, Israel. The Kremlin’s decision to help Israel meant that the balance of power in the Middle East had suddenly shifted behind the scenes. Only a handful of people inside the Kremlin and the Israeli Cabinet knew the secret, and now I did, too.

I did the right thing and asked the Israeli government if they had any objection to my telling the story. I suppose since I am an American and had discovered the archives story from non-Israeli sources, there was nothing they could legally do to stop me, but I made the offer anyway. To my surprise, the Israelis did not ask me to kill the story. They only asked that I not reveal the names of the Russian and Israeli personnel involved in the archives deal. In return, I agreed to attribute the confirmation of my story to “senior Israeli officials.” I never told them how I figured it out in the first place.

Yes, I had help from people in the American intelligence community, but not the kind you think. Over the years my friends have mentored me in the secret history of intelligence influence on foreign policy. They taught me that 80 percent of all secrets can be obtained from open sources—newspapers, electronic media, books, magazines and research papers.
The truth is that secrets have a short shelf life, a year or two at most. Even a big secret like the Allied code-breaking of enemy communications during World War II was repeatedly discovered by the press while the war was still going on. The “Dewey for President” campaign was preparing to “expose” President Roosevelt’s “failure” to prevent the Japanese sneak attack on Pearl Harbor because our code-breakers had warned FDR of the attack in advance.

It was not true, of course. The Dulles brothers (Dewey’s Republican campaign managers) knew that FDR had promptly given the order to warn Pearl Harbor, but the failure to deliver the warning on time was due to petty squabbling among the admirals and generals. FDR had decided it would not be good for American morale to court-martial almost all his military leaders on the first day of the war, so he covered up the Pentagon’s incompetence. It was probably the right thing to do at the time.

The Dulles brothers wanted to reveal the code-breaking secret as a dirty political trick to help the Republicans win the election. When FDR objected on grounds of national security, the Republicans pointed out that the fact that we had broken the Japanese code had already been published 22 times in various American newspapers, journals and magazines. FDR admitted this was true, but the Japanese had not read those papers. They were still using the same “unbreakable” code they had used at Pearl Harbor. Incredible but true.
Candidate Dewey overruled his campaign managers. Dewey lost the election but allowed FDR to keep the code-breaking secret that helped us win the rest of the war in the Pacific.
I figured out from hundreds of public sources that only the Russians had the means, method, motive and opportunity to leak the location of Iranian nuclear archives to the Mossad. Feeling as though I were working on an upside-down picture puzzle, I tried to fit the different-shaped pieces together until I had assembled a cohesive whole. Sometimes the magic works, and sometimes it doesn’t.

Not all solutions are the right ones. The best statistical correlation explaining the rise and fall of the stock market one year was found to be the rate of alcohol consumption by Presbyterian clergymen in Manitoba, Canada. It was just a coincidence that the two patterns were the same. One had nothing to do with the other.

The CIA commissioned a study to find out why some intelligence analysts were better at solving complex puzzles than others. Why were some of their experts able to predict the future course of political events around the world and some were not? To their surprise, the CIA found that the person who had the highest success rate in predicting future events was not one of their expert intelligence analysts, but an untrained housewife from New Jersey who habitually read a lot of books and newspapers.

She simply had the kind of mind that could sort the wheat from the chaff and assemble the random historical dust of data into clear, coherent patterns of movement, from which she could track and predict the next change of direction in the wind. No one knows how she does it. She does not know herself.

I do not know either. I have had years of professional training, hold several advanced degrees, and am in contact with hundreds of intelligence experts around the world, but that does not explain why I sometimes wake up at night and shout: “The Russians gave the archives location to the Mossad.”

I see the pattern as clear as day, but I cannot explain how I figured it out. It is just that all of an instant, a mountain of snowy facts suddenly resolves into a flash of icy perception. All I know is that I do this again and again, and that my intuitive understanding is (almost) always confirmed by the facts. As the kids say, go figure.

Russian Reasoning
In hindsight, some things are pretty obvious. In 2017, it must have been painfully clear to the Kremlin that neither the Americans nor the Europeans were about to lift economic sanctions on Russia. Falling oil prices and rising sanctions were making it really difficult for Russian companies to make the interest payments on their Western loans.

The Russian intelligence services have been quietly helping to re-elect President Maduro because his political stranglehold on the Venezuelan economy has paralyzed its oil industry. Taking Venezuelan oil off the market is not enough by itself to jack up prices; what could the Russians do to convince the Americans to reimpose sanctions on Iran?

Unsafe Streets in Yerushalayim // Recent Arab attacks on chareidim have...

Turkey beats the french in Libya’s war // The U.N. dithers...

UNESCO on the Cusp // An anti-semitic entity offers a different...