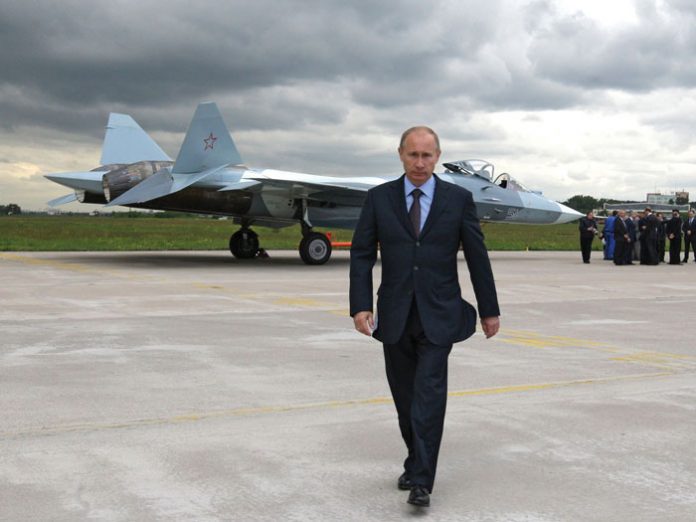 Americans were surprised when President Vladimir Putin of Russia engaged in a well-publicized bit of nuclear saber rattling. He announced that Russia had created a complete set of secret weapons capable of evading all American defenses and delivering atomic bombs on any American city he chose. There was, or so he claimed, a giant underwater torpedo that could be fired from a submarine at very long range that would shoot out of the water and destroy any city on the American coast in a nuclear surprise attack.

Another new Russian weapon was a warhead with wings that would spiral down from outer space at supersonic speed, twisting in flight to avoid any attempt to shoot it down. Another was a supersonic cruise missile that could skim the ocean waves for thousands of miles and steer its way around the radar range of American warships at sea. Some of Putin’s secret flying weapons were powered by miniature nuclear-powered rocket engines with unlimited range.

Unlimited range! Undetectable by any known radar! Putin concluded his announcement with a film of a launch followed by a graphic image of a secret weapon in flight from Russia to Florida ending in an atomic detonation over Tampa Bay (or maybe it was Mar-a-Lago). When the film was over, Putin was met with waves of cheers and applause from his wildly enthusiastic Russian audience.

The reaction from Tampa Bay was less enthusiastic. Why us? Asked the local paper. Why would Mr. Putin want to target us? Well, apart from the fact that the triggers for American nuclear weapons are made here, Tampa Bay is also the home for CENTCOM, the Pentagon’s Central Command (which recently killed several hundred Russian mercenaries in Syria) and SOCOM, the Special Operations Command (which has killed thousands of Russia’s terrorist proxies everywhere else).

As if that was not reason enough to be on a Russian target list, MacDill Air Force Base is located on a peninsula smack in the middle of Tampa Bay. This is where our aerial refueling tankers top off before taking station over the Atlantic Ocean to refuel our stealth bombers on the way to bomb Baghdad, Vladivostok and any or all targets in between. While a Russian first strike on Tampa Bay might not win the war for them, it would very possibly delay our Air Force’s ability to launch stealth aircraft for a retaliatory strike against them.
Well, so what? Even if Putin took out not just MacDill, but our entire Air Force in a sneak attack, it would not prevent the destruction of Russia in a counter-attack. We would still have the other two legs of our nuclear triad. More than a thousand nuclear warheads carried on hundreds of intercontinental ballistic missiles could be launched from either underground silos or underwater submarines. To attack America with nuclear weapons is madness.

So why is Putin spending all this money to build sneak attack weapons? Even weirder, what is the point of building sneak attack weapons and then announcing it at a press conference? There are a lot of explanations coming from the chattering classes, most of them wrong.

Political commentator Rachel Maddow, who usually gets it right, suggested that maybe it’s all a bluff. Maybe Russia does not really have any new weapons at all. She points out that some of the CGI cartoon images from Putin’s film were actually copied from website cartoons that were several years old. If the Russians cannot even make their own computerized graphic images of weapons, she asks, why should we believe they can make the weapons at all?

Yeah, that’s the ticket. Putin can’t make cartoons, why should we believe he can make nukes so advanced that they render all American and NATO defenses useless? It is a comforting thought and has become quite popular. The Pentagon chimed in that Russia has been trying to make these advanced systems for years, but their rockets just keep crashing.

In the first place, there has been a small flood of Russian defectors in the last several decades who would gladly have revealed the existence of such a huge deception program. In the second place, if Russia really has deceived us over the years and built all these new weapons in secret, why would Putin spill all the secrets now? Why choose February 2018 to break the news?

Well, there is a Russian election coming up in March 2018. If he wins this, Putin could very well become president for life. Perhaps Putin is revealing state secrets to get more votes? Not likely. All he needs is another Xerox machine to forge more ballots. He has done that before.

No one in Russia seriously thinks that Putin is at any risk of getting voted out this time. He has already killed or disqualified any real political opponents. Every Russian knows that the other candidates on this year’s ballot are a joke. It is possible that a majority of Russians will protest this farce of an election by staying home, but then Putin’s police would have the names of the no-shows on their lists. My bet is that most Russians will turn out and vote because they are too intimidated to do anything else.