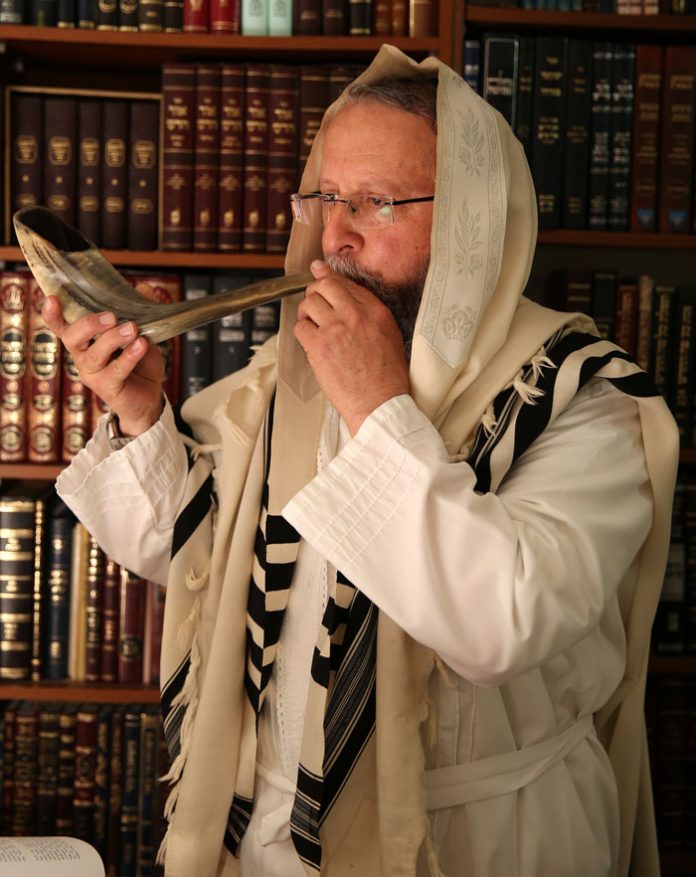 It’s a bit of a daunting undertaking to try to describe a Yemenite shofar, or any shofar for that matter. But the best description I’ve ever seen was undoubtedly an ad that had been placed by a shofar seller describing his merchandise as follows: “Majestic shape—great showpiece. This is the biggest Yemenite shofar we’ve come across in over five years! If you’re looking for a very rare, one-of-a-kind trophy-sized collector’s shofar, this could be it! Big body—big bell—big mouthpiece—big sound! This enormous shofar is all about BIG! Exceptional sound; low, rumbling bass notes!” So there you have it, in a big nutshell.

I am by no means an expert to be able to determine whether Reb Gedalya Sheinen’s Yemenite shofar is truly one-of-a-kind, but spending time with him is a little like being locked in a room with a hundred Yemenite shofars all emitting ear-splitting peals at the same time—not so much because of the different types of horns he blows for me, but because of the many activities he is engaged in while we are trying to have a conversation. He shifts from one important undertaking to another, as his eyes continuously scan the environment. It makes me wonder if the antique clocks adorning the walls of his Jerusalem apartment are there to time the various tasks he needs to complete.

Some people experience vertigo when they’re around active people, but being in Rabbi Sheinen’s presence is actually soothing, as he’s all about chesed and helping others. He’s also a mesmerizing storyteller, especially about the gedolim of yesteryear.

As is known, people who blow shofar typically encounter all kinds of problems. Sometimes they blow mightily into the horn only to have it emit a weak and feeble sound. Rabbi Sheinen, though, doesn’t seem to suffer from those issues. Bright, shrill tones emanate from his shofars every time he puts one to his mouth. While I wonder what his neighbors might think about these sounds, I have no doubt that Rav Elyashiv, zt”l, appreciated them. After all, there can’t be too many shofar blowers like Rabbi Sheinen, even in the Holy City of Yerushalayim.

When I ask him how he came to blow shofar for Rav Elyashiv, I’m taken aback when he tells me that it all happened because of his skill in blowing Yemenite-style tekios.

How It All Started
“When I was a bachur in the Chevron yeshivah,” he begins, “I would blow shofar for the sick people in Hadassah Hospital. Then I learned that Rav Elyashiv was makpid to hear Teimanishe tekios on Rosh Hashanah. In the beis midrash itself they would blow the regular tekios of Yerushalayim, but after he came home he would hear them again according to the opinion of Rashi and the Ritva, which is also the way it’s done in Brisk, and he would also hear Teimanishe tekios. In shul, though, it would be done exactly as is required to be yotzei so that it shouldn’t seem as if they were doing away with the old minhagim. I had learned how to blow the Teimanishe tekios, so I told Rav Elyashiv’s son, Rav Moshe, that I wanted to blow shofar for his father. He said that his father would enjoy it very much and invited me in. I blew tekios in his house for 23 years and he really appreciated it.
“The Yemenite shofar is difficult to blow because the mouthpiece is more curved than a regular one. The shevarim are also very different, because the usual shevarim and teruah are made by using the tongue to regulate the sound, whereas the Teimani ones rely on the mouth and stomach. Rav Elyashiv would joke with me and ask if I had a whistle in my mouth! I explained that I had the koach to get those sounds out because I could see him standing in front of me.”
He later came to blow shofar for Rav Elyashiv in his beis midrash as well.
“Five years before he was niftar, when his brother-in-law, Rav Simchah Levin, was too weak to blow shofar for him anymore, he sent his einikel on the night of Rosh Hashanah to tell me that his grandfather wanted me to blow shofar for him the following day in shul. This presented a dilemma, as I was the baal tokeia for a number of other shuls in the neighborhood, so that night I found replacements for the other shuls and the next day I showed up in Rav Elyashiv’s shul. As I stood on the bimah and started to recite ‘Lamnatzei’ach,’ I found myself needing to hold the shofar with both hands because of the pachad I felt in Rav Elyashiv’s presence; he was standing right next to me and watching me intently. After I finished ‘Lamnatzei’ach’ and was ready to begin, Rav Elyashiv raised his head and looked at me; I think it took me nearly a minute to get the shofar to my mouth. I had to concentrate really hard and beg Hashem for help; otherwise, I wouldn’t have known what I was doing. Baruch Hashem, it went smoothly. I can still remember the way he said the words of ‘Lamnatzei’ach’ and ‘Ashrei Ha’am.’ You could hear how he was speaking directly to the Ribbono Shel Olam. After davening, we went to his house and I blew the other tekios for him.”

“What time did the davening on Rosh Hashanah finish?” I want to know.
“Around Minchah gedolah, approximately 1:00 or 1:15 p.m.”