I turn the pages of the calendar and suddenly realize that it is almost time to commemorate the anniversary of My New Life. I never expected all these changes, but then again, neither did the rest of the world. It is all so strange, beyond anything I could have ever imagined.

Last year, in February 2020, I traveled to Israel with my granddaughter Bella for her pre-bas mitzvah trip. Her mother Miri had planned to run the Jerusalem Marathon, but it was canceled quite unexpectedly. However, on March 9, Bella and I arrived in Israel, excited about celebrating Purim with family. My grandson Avi met Bella at the airport and brought her to his home in Kiryat Sefer for the holiday, while I continued on to Yerushalayim.

I love my apartment on Rechov Aza in Rechavia. That is where I regain my energy and hope. It is my private city of refuge, my place of safety and security. I purchased it 28 years ago, and after renting it out for 13 years, I had it redecorated. I now have central air and heat, two bathrooms with showers, and all new appliances and furniture. With a wraparound balcony and a private garden, it’s a wonderful place. I also recently replaced the clumsy folding doors between the large living room/dining room area and the guest/library room with mahogany-stained barn doors. I just love being there.

This time, however, right from the start, life was different. I arrived quite late, but in the morning, when I went outside to go to the store to pick up some basic staples, I was deeply saddened. Large handprinted notes had been attached to the walls outside the door to my apartment, the elevator door, and even the door to the main entrance. The notes stated that new arrivals to Israel had to quarantine for two weeks according to government regulations. Upon arrival at Ben Gurion, I hadn’t been apprised of this rule, and after some investigation, it appeared that I had been on one of the last arriving flights before this law was imposed. So I did not quarantine, but I felt the cold stares of my unwelcoming neighbors.

Without a television or radio, I was unaware of the changes being announced. My friends called to inform me that people were advised not to attend shul for readings of Megillas Esther and that large gatherings weren’t advisable. On a tree near my house I read an announcement about a nearby outdoor reading. So that evening, I went to the corner of Rechov Aza and Rechov Ha’Ari and sat at a small table on the sidewalk outside the Greek restaurant with other socially distancing people and listened to the beautiful story of Queen Esther. No one wore masks because none were available for purchase. All this was new.

The next day, I went by bus to my niece Henie in the German Colony. The people on the bus were quiet and looked solemn as they kept their distance from one another. The bus driver had tied a heavy rope around his area so that passengers couldn’t get close to him. My nephew David read the Megillah, and then family members and a few close friends gathered for the seudah. There were friendly smiles but no hugs or handshaking, only elbow-touching or a wave of the hand. Everyone was friendly but definitely cautious.

I had planned to stay until March 30, but the situation was definitely not tourist-friendly. Things were closing down every day: tourist attractions, museums, restaurants, malls and stores. Bella visited some relatives, but there wasn’t much for her to do in this situation. Reluctantly, I changed our departure date to March 23, a very fortunate move, because we ended up returning on one of the last flights to leave Israel. The scene at Ben Gurion was like a page out of an apocalyptic novel. It was almost completely deserted, with only one open counter. The stores were closed. There were no people. It was an unbelievable, eerie sight. I felt uncomfortable, not knowing if leaving was preferable to staying, but the decision had been made.

When we arrived at the airport in Newark, my daughter, who is usually soft-spoken and easygoing, came to pick me up. “Things are different here now,” she said. “I’m sorry, but you’re going to have to sit in the back.” She sounded so stern, so different from her usual self. “We don’t know what this virus is, and it can be even more dangerous for someone your age. We have to keep you safe.” There was no hug or kiss in greeting. She handed me a mask and explained that I would probably be staying in her house in Lawrence for the next four months. I laughed because it sounded quite incomprehensible. Four months? 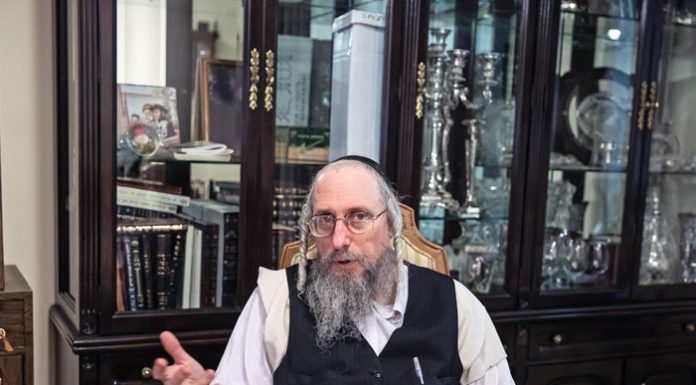 Getting a Handle on OCD // Dr. Jonathan Schwartz explains that...