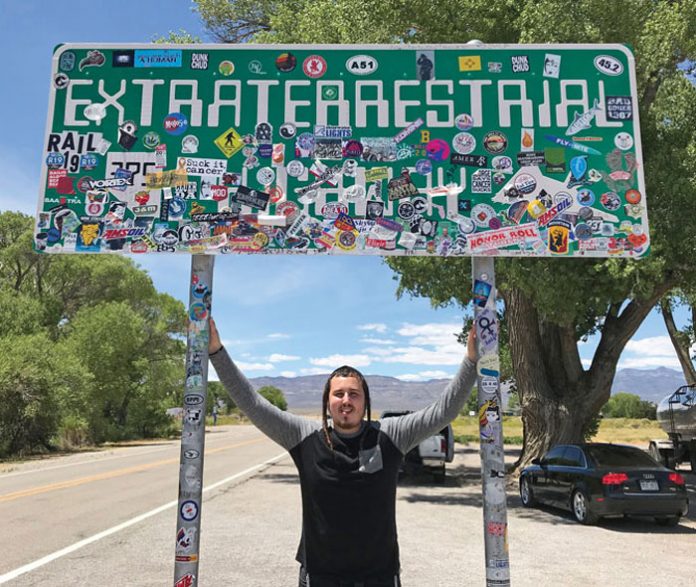 Deep in the Nevada desert lies a massive parcel of land that belongs to the United States government. Surrounded by tall mountains, it is shrouded in conspiracy theories, mysteries and dark military secrets. Its official name is Groom Lake but it is commonly known as Area 51. And while almost no one knows what really goes on there, speculation is rampant. Tales of extraterrestrials, unidentified flying objects and nuclear secrets abound. While I had been itching to visit the area for a while, I somehow doubted I’d ever really do it. Getting there isn’t easy, and access to the Air Force facility is granted to absolutely no one. But when an Internet prankster created a meme about storming Area 51 a few months ago, the story went viral. Two million people signed up to “Raid Area 51 and See Them Aliens!” and while I don’t really believe in the existence of extraterrestrials, I figured it was the perfect time to check the place out. The time had come for me to figure out what’s flying in Area 51, pun intended.

My 6:30 a.m. flight to Las Vegas was completely full—of frum Jews. First there was a minyan at the boarding gate in Newark, and almost every row on the plane had at least one seat occupied by an observant Jew. I was scratching my head, trying to figure out why so many of us were headed to Las Vegas, when my seatmate, a yungerman from Lakewood, explained it to me. “There’s an Amazon convention in Las Vegas this week,” he offered. When he asked me why I was traveling to Las Vegas, all I told him was that I worked for Ami Magazine and was pursuing a story. (I didn’t exactly feel like telling him that I was headed to a secret military installation in the Nevada desert.) After some small talk and a good snooze we landed in Vegas. It was brutally hot, 109º Fahrenheit. The perfect temperature for a ten-hour excursion in the desert.

I Spy Janet
My investigative sightseeing starts immediately as I disembark from the plane at McCarran Airport in Las Vegas. Once inside the terminal, I make my way to the large floor-to-ceiling windows overlooking the tarmac. I scan the area looking for clues, and find them sitting right there in plain sight. From my vantage point, I can see five airplanes with a distinctive red stripe running down the side. These “Janet” airplanes belong to the highly classified fleet of aircraft that serves as a shuttle for the military and contract employees who work in Area 51, and it has its own private terminal in a small, nondescript building. (The name Janet is said to stand for either “Just Another Non-Existent Terminal” or “Joint Air Network for Employee Transportation.”) There’s also a special parking lot where those who work in Area 51 can park their cars while spending the day at the base, as well as buses that provide transportation to the workers. I whip out my camera and snap a few pictures. I already feel as if I’ve seen something fascinating, but the day is still young, and unbeknownst to me, I’ll be having an especially action-packed day.