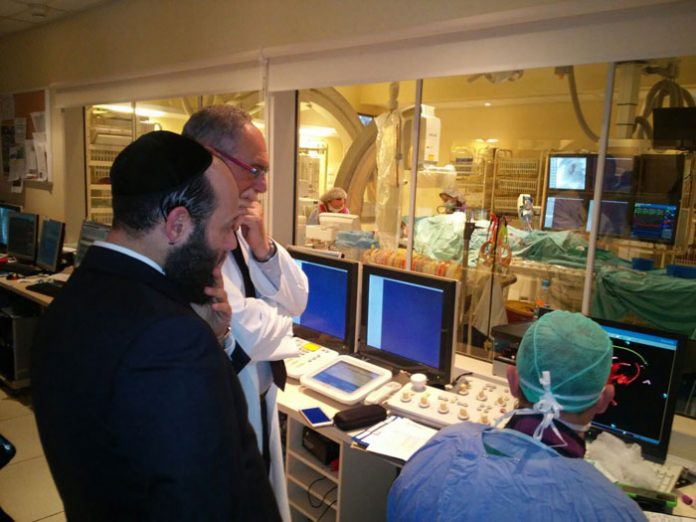 One morning, a resident of Bnei Brak, woke up and didn’t feel very well. She had a minor stomach ache and some indigestion, but then the pain started to get stronger rather than fading away. She went to the family doctor, who informed her that she was suffering from a minor virus. He told her to take some over-the-counter medication and sent her home. But not only did the pain not subside, it actually grew worse. After another checkup, her doctor gave her some stronger medication, but the pain still continued to grow worse.

Growing more and more concerned, her husband turned to the Lemaanchem organization, and he was told to send them his wife’s medical file as soon as possible. After looking through her file, the organization’s expert, who specializes in this particular field, recommended that he tell his wife to go to Ichilov Medical Center and ask for an ultrasound. As Elchanan Rogoway, office manager of Lemaanchem, tells us, “It turned out that the woman had a growth that was in its first stages. We called the husband and told him to run to the hospital as fast as possible. We then put him in touch with the best surgeon we know. That night she had emergency surgery and the growth was removed. It’s possible that her life was saved just because we were able to catch the growth at such an early stage, before it had the chance to cause critical damage.”

The phenomenon of medical advisers who are proficient in guiding people who are ill in the chareidi community is well-known. There are a number of organizations in Israel that are run by well-known people who are experts in the field. For someone who isn’t familiar with the concept, the idea of medical advisers might seem unimportant, but the way Rogoway explains it, it often results in actually saving lives. “This story of shows that, first of all, the advice that we give is often life-saving. It also shows that advice isn’t enough on its own. We don’t just give advice and then leave the people to their own devices. When necessary, we will take care of the entire process of getting the person in touch with the right doctors and the right treatment until the problem is taken care of. When sick people hear the bad news, they don’t know what hit them. They don’t know what to do with the test results they received, and it can take them a lot of time—time they may not have—to figure out their next steps on their own. We are here to step in and take care of that.

“The truth is,” he continues, “that these are the easy stories. We have cases that are much more difficult. We had a case of a three-year-old girl with a liver problem. Her liver was retaining fluid and became very swollen. It got to the point where it became as large as a ball and all antibiotics were ineffective. She underwent a number of surgeries, but it became apparent that she had a genetic problem that caused the issue to return after every treatment and surgery. Eventually the case was brought to us. The CEO of the organization, Rabbi Yosef Erblich, heard about an experimental treatment at a hospital in Boston that deals with the gene itself rather than with the symptoms. At the time, this treatment had only been successfully attempted three times, but this was the girl’s last chance, so the family agreed to try it. We arranged for the family to be admitted to the trial, and they stayed in Boston for half a year. Amazingly, the treatment was successful. Today she continues to receive treatment and is a trailblazing model for a treatment that could change the world.”

In recent years, the phenomenon of medical advisers has become more and more widespread. Many of them were founded by chareidi askanim who provide this service at no cost. One of the largest of these organization is Lemaanchem, which now also deals with other spheres of assistance for those who need them. The founder and CEO of the organization is Rabbi Yosef Erblich, a 42-year-old who is originally from Antwerp and has been in this field for the past 22 years.

Entering his office in Bnei Brak, one can see walls that are covered in thank-you letters, pictures of organizational activities and certificates of appreciation that were given to the organization. From among all of them, however, there is one picture that really sticks out. It is a picture of twin boys with big smiles on their faces.

It turns out that these two boys and their mother were in grave danger while she was expecting them. The doctors had informed their mother that she would need to undergo a complicated and very risky surgery. Three hours before the scheduled surgery, the case was sent to Lemaanchem. Rogoway relates, “Rabbi Erblich asked them to hold off the surgery and to check if there are any connections with various heart problems. The woman was quickly taken for testing where it was found that she was suffering from a severe infectious disease that affects the rest of the body. Although it was quite serious, it was treatable via antibiotics and the risky surgery—which it turned out would have been ineffective in any case—was avoided. The mother recovered and the twins were born completely healthy. Rabbi Erblich was invited to their bris, and the father surprised him by giving him a kibbud. When he handed him one of the babies, he whispered, ‘It’s thanks to you that we’re celebrating this bris rather than going to a levayah.’ These words are our motto. They illustrate what we’re talking about, and they’re the reason why we get up in the morning and why we’re here.”

Lessons from our Father // The daughters and daughter-in-law of the revered Rosh Yeshivah, Rav Moshe Green, reminisce about the...

Leadership in an Age of Terror & Tragedy // An Exclusive...