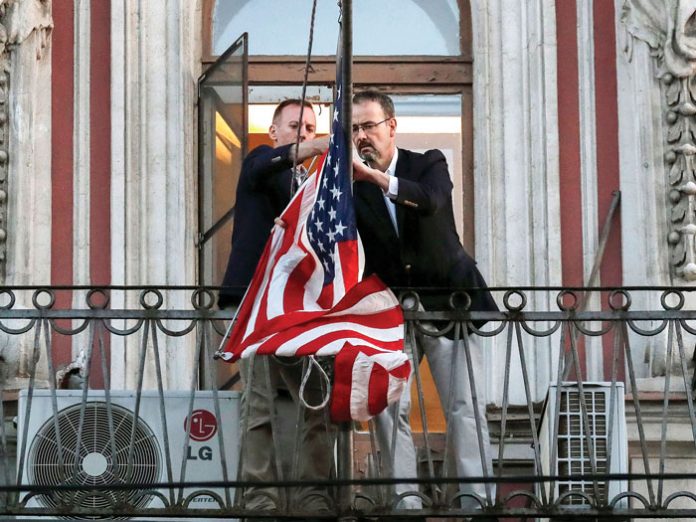 Ever heard of diplomats’ disease? It started in the US Embassy in Cuba and has reappeared in a US consulate in China. No coincidence. Same symptoms—really rare symptoms. American diplomats (and their wives and kids) are reporting that they hear static in their heads and the sound of marbles rolling around. Not your everyday kind of medical complaint.

There is nothing like it in the medical books, or in the history books. Elderly people who are losing their hearing often complain of hearing static. But no one has ever reported hearing marbles rolling around inside their skulls. It is a symptom that has left doctors scratching their heads.

All the patients are giving the same description of the problem. This is the type of thing that can happen when psychiatric patients swap symptom stories in the waiting room…sort of a one-up “I am sicker than you” competition. But it is a bit puzzling when very non-hysterical diplomats on opposite sides of the planet, who have never talked to each other, describe the same complaint independently. How is it that they all came up with the same comparison—“rolling marbles”—to describe the noise in their heads?

Until this week, any mention of “rolling marbles” was deliberately withheld from the media. It was not circulated on any diplomatic messaging, texting or encrypted email service…sort of like the old-school police trick of not telling news reporters about certain elements of a murder scene so that the cops can quickly weed out the wackos who call in to confess to every crime they hear about in the media. If the caller cannot describe the position in which he allegedly left the body, then he wasn’t there.

US government investigators are now reaching the conclusion that the most logical explanation for American diplomats giving the same “rolling marbles” description is that they were actually hearing the same thing. And that is really scary. What could have caused them to hear the sound of rolling marbles, and why was it happening to US diplomats on both sides of the planet?

Here is a clue, the old spies tell me. This unique sound was heard only by American diplomats and their families living in Cuba and China.

Last week The Washington Post, The New York Times, and other media outlets began reporting that American diplomats and their families have actually been falling ill since 2016 with mysterious symptoms that, according to the State Department, are like those “following concussion or minor traumatic brain injury.” The illness has even led to the evacuation of diplomatic families from China. This is not science fiction.

The old spies indicated to me that “rolling marbles” is the new sound of communist espionage. Seriously? A commie brain beam? Should all US diplomats now wear tinfoil hats to shield them from the sound of rolling marbles? Why would some nutter of a communist spy chief invent such useless technology?

I could almost understand it if the commies were beaming the sound of dripping water as a high-tech form of Chinese water torture, but rolling marbles? Who cares if diplomats hear rolling marbles in their sleep?

Not a joke, the old spies say. The communists have used similar types of energy beams for espionage before. They once used an invisible microwave beam to spy on American diplomats in Moscow.

Microwave? As in microwave ovens? Wouldn’t that cook their brains?

No, not at low power. But yes, some US diplomats in Moscow were getting really sick until we figured out what was happening and made the Russians stop. The old spies told me how the microwave espionage beam worked and how the whole techno-torture war began.
At the beginning of the Cold War, there was no technology, just brute force. If the Russians wanted information from an American they suspected was a spy, they would simply kidnap a low-ranking army officer or junior diplomat, take him to East Berlin, drug him, torture him, and kill him. Then, after the interrogation, they would dump his body back in the American Zone.

That stopped when General Singlaub kidnapped one of the Russian kidnappers, shot him, and dumped his body in a trash can outside the Russian Embassy, which was followed by a lengthy lecture to the Russians on their obligation to ensure prompt garbage removal. The Russians stopped killing American diplomatic personnel outright, switching instead to other means of tracking American agents.

In front of every American diplomatic office building, the Russians spread a powder that could only be seen through ultraviolet glasses. Even if an agent jumped into a waiting car and escaped his Russian pursuers, the telltale ultraviolet footprints would eventually lead the Russians to the doorstep of whichever apartment building the American had visited in Moscow.

The rest was predictable. The Russians would arrest everyone in the building and take them in for interrogation, and the interior of each apartment was searched for the ultraviolet tracks left by the American. Listening devices were then installed in the apartment of the American collaborator, who was followed to identify other American agents in Moscow.

The ultraviolet powder was simple and effective, but it had one major drawback—it washed off in rain and snow. There was a lot of rain and snow in Moscow. So the Russians switched to dusting the American Embassy stairs with radioactive powder. No matter how much it snowed and rained, enough of the radioactive trail remained that it could be detected with a Geiger counter.