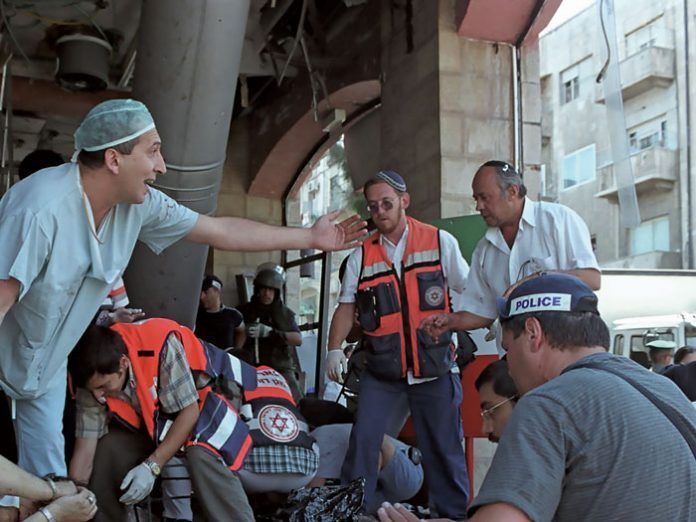 On August 9, 2001, a Palestinian terrorist from the West Bank, Izz al-Din Shuheil al-Masri, walked into the Sbarro restaurant in Jerusalem and detonated explosives that he was carrying in a guitar case loaded with metal objects designed to increase shrapnel. The explosion killed 15 people, including seven children, and wounded about 130 others, some grievously.

The stories of those killed or injured in the blast have continued to horrify and sadden, even 18 years later. Injuries remain, some debilitating, and one of the victims, Chana Nachenberg, remains in a vegetative state till today. The gaping holes in families still remain.

But there are other sources of pain, as well. The Sbarro bomber was driven to the restaurant by a Palestinian woman, Ahlam Ahmad al-Tamimi, who had planned the attack. Tamimi had transported the bomb into Jerusalem from the West Bank, and she had also carried out a test-bombing in a Jerusalem grocery store a few weeks before. Tamimi was arrested by the Israelis, tried and convicted in 2003 and sent to prison for 16 life terms.
But Tamimi is free now, living openly in Jordan.

That’s because in 2011 the Israeli government traded her, along with more than a thousand other terrorists, to Hamas in exchange for Israeli soldier Gilad Shalit. Tamimi was sent to Jordan.

She has since become something of a minor celebrity and hosts a talk show. Not only has Tamimi never expressed remorse for her actions, she has said how disappointed she was that the body count was not higher.

But Tamimi wasn’t off the hook entirely just because Israel released her. Two of the people killed in the bombing were US citizens: Shoshana Greenbaum, a 31-year-old teacher from New Jersey who was expecting her first child, and Malka Chana Roth, a 15-year-old who was living in Jerusalem. Four of the wounded were also Americans. And the US government had a law on the books just for cases like this, where terrorists struck Americans overseas.
In 2017, the US government unsealed a criminal complaint against Tamimi. A $5 million reward for information that would lead to her arrest or conviction has been posted. But the Jordanian government has refused to extradite her.

Over the last 18 years, two of the people fighting strongest for justice for the victims of the bombing have been Arnold and Frimet Roth, Malki Roth’s parents. Arnold recently spoke with me about the experience that he and his wife have had in seeing their daughter’s murderer get set free and how they’ve pushed to get the US to bring final justice in this case.

Though we mostly discuss the technical aspects of the case, there are moments when the memory of his daughter cracks Mr. Roth’s voice, and as anyone would, I tear up silently. The pain has remained as they have fought on.

Revolting release
Mr. Roth pointed to one particular fact when he discusses the decision of the Netanyahu government to let Ahlam Tamimi go:

“The three judges on the military tribunal who heard her case made an unusual and explicit recommendation that no consideration ever be given to releasing her on bail or reducing her term.”

But there were intimations early on that that might not be the end of the case.
“When she was sentenced to 16 terms of life imprisonment, our feeling was that we were okay with it, knowing that she would be behind bars and would never have a life, would never be able to marry and so forth.

The Ultimate Transplant // Modern marriage is a merger, not a homecoming

Speaking with the Peacemakers // Exclusive Interviews with Jared Kushner, David...

Family Ties, Family Lies // Whatever Became Of The Poor Little...