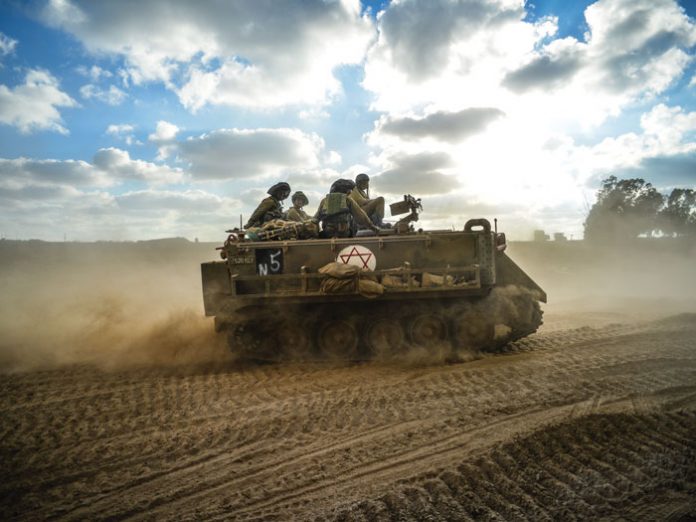 What Do You Think You’re Doing?

“Are you sure you want to enter Gaza?” asks Yoni, an IDF soldier at the Erez Crossing, the northern access point into the Gaza Strip.

“Why are you doing this?” the soldier presses, concern written all over his face.

“Come on. Are you aware of the danger you’re putting yourself in?”

“And what you’re doing is not dangerous?”

“Sure it’s dangerous, but it’s important.Let others report on what’s going on,” he tells me. “It doesn’t have to be you.”

“I just got back from Iraq,” I tell Yoni. “I’ve covered neo-Nazi rallies. I have a chareidi colleague who spent a week in North Korea earlier this year. Look, I’m not reckless. I know exactly how dangerous this is and it’s precisely because of this that I’ve taken every possible precaution.”

Precautions such as arranging for an armed guard, a trustworthy driver, and a fixer who can show us where to position ourselves so we can see the goings-on without actually being put in harm’s way. Precautions also include open channels to Hamas through Israeli contacts, who would keep our fixer up to speed about any possible wild cards.

Another soldier, who’s been mostly quiet until this point, speaks up.

“What Hamas is letting you do and see isn’t journalism. Everything is perfectly scripted. They’re not letting you see what’s really going on. It’s like they’re taking you on a guided tour, and everything they let you see is for a specific reason.”

I wonder about that.

“I’ll tell you what I hope to see there,” I explain to him. “When a man shows up to the border with a baby, I’d like to see what happened before the baby got hurt—assuming it really was a live baby in the first place. Did someone hand it to him? Was he being coerced? Was the child his own?”

“Let me tell you something,” the soldier tells me in a lowered voice. “I was involved in a firefight in Hebron and they were shooting at us from trenches. Suddenly, just above one of the foxholes, I saw a flash of color. I quickly lifted my weapon and was about to open fire when I saw a pair of arms holding up a six-year-old boy. They were holding up a six-year-old boy in the hopes that I would shoot him. These are the kinds of things that I see when the cameras aren’t rolling, which Hamas would never let you witness.”

“You assume I’m here to report on Hamas,” I challenge. “Suppose I’m only here to report on the media? The world is shown a lineup of lifeless bodies, wrapped in white sheets. What I’d like to know is how many of those bodies get up and walk away after their pictures have been taken. And when that happens, how many in the media actually remove such a picture and retract the story? How much of what’s being reported is missing broader context? I’m not expecting to hold Hamas to account, but I believe it’s very important for me to hold my colleagues in the media to account.”

The soldiers seem unconvinced, but less so than before.

Gaza: Enter From Here
The first thing one needs is a liaison who works with both Hamas and the Israelis, and who has earned the trust of both sides. Such people do exist. The liaison does his own vetting, and if he believes the journalist seeking entry isn’t the kind who would jeopardize anyone’s safety, he sends the completed application to Hamas for a visa.

At no point in the process do we talk to Hamas directly. We don’t trust them and they don’t trust us. Hamas, very wary of journalists in general and Americans in particular, puts the candidate through their own vetting process. Should everything add up from all angles they ask for a headshot, which would be applied to the Hamas entry visa. “Tilt your head in such a way that your kippah isn’t noticeable,” the liaison tells me before the picture is sent.
To assure safety from within, an armed guard, a driver and a fixer are a must. The liaison on the Israeli side knows which Gazans are trustworthy and sets everything in motion. These individuals are paid very well, and their job is to assure the safety of their clients. Many folks in this industry have reputations spanning decades. I’m told to be ready to tip anyone who works with me. “A tip as small as five or ten dollars is enough to feed an entire family in Gaza for an entire day,” it’s explained, “and they really appreciate that.”

Of course, adherence to the instructions is of utmost importance: Once inside, talk to no one but the fixer. A bulletproof vest and helmet is to be worn at all times. There’s an insistence that I call our liaison back in Israel every half hour, and there’s a contingency plan in place [which, for security-related purposes, I’m leaving out of the article] should 30 minutes go by without a phone call. I’m also cautioned that Hamas monitors all communications entering or leaving Gaza through the regular channels. I’m advised that anything that needs to be said should be transmitted via Whatsapp with its advanced encryption system so that nothing is intercepted.“On your way in, the IDF will tell you anything they can to discourage you from entering,” I’m told, “but they can’t stop you. So long as you’ve been approved for a visa from Hamas there’s nothing they can do to prevent you from entering.”

Washington Insider // National Day of Prayer, Q & A With...

Coronavirus vs. Kosher Food: How will the COVID-19 outbreak affect the...