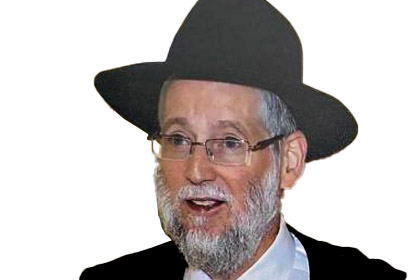 Rabbi Avraham Wolfson, who passed away last week, was the eldest son of the illustrious philanthropist Zev Wolfson, founder of The Wolfson Foundation. The Wolfson Foundation upholds numerous Torah institutions around the world, and is a main supporter of Chinuch Atzmai and Torah Umesorah.
Although Reb Avraham was a businessman, his primary focus was learning Torah and doing chesed. He formed a special bond with gedolim such as Rav Yosef Shalom Elyashiv, Rav Aharon Leib Shteinman, Rav Michel Yehudah Lefkowitz, zt”l, and yibadlu l’chayim tovim Rav Elya Ber Wachtfogel, Rav Leib Gorelick and many others. Reb Avraham suffered a heart attack a few months ago, from which he sadly never recovered, and he passed away at the age of 64 after contracting COVID-19.
On a freezing cold day this past February I was frantically trying to meet my rosh yeshivah, Rav Elya Ber Wachtfogel, to discuss an urgent matter. At 12:30 a.m. I got a call from him saying that he was available for a few minutes, and I should come over to see him in Rabbi Avraham Wolfson’s home.
Since Reb Avraham was a well-known philanthropist who donated massive amounts of tzedakah, I expected to find a well-appointed home similar to others in the neighborhood. When I arrived at the address given to me, I had to double-check that I hadn’t made a mistake. The house was more than simple looking; the siding was worn and faded.    Inside, Reb Avraham’s house was tasteful but not ostentatious. Instead of finding a quiet home—after all, it was 1:00 a.m.—it was teeming with people seeking donations for various causes.
At the time, Reb Avraham was suffering from a foot ailment. As I approached the room he was in, I heard two people arguing. It turned out to be Reb Avraham and Rav Wachtfogel.