Back in the day—by which I mean this past spring—I was a resolute non-masker. When shopping, of course, I followed stores’ rules. But in shul, I was part of the majority of attendees who, while shunning hand-shaking and coughing in other people’s faces, chose not to self-suffocate. In my long-favored hashkamah minyan, which required masks, I was granted permission by the maskers to sit behind a mechitzah in the back of the room.
But today I wear a mask religiously, both meanings intended. Because my objection to masking had only been because I felt that the benefit of covering my mouth and nose was outweighed by the danger to my health in not receiving sufficient oxygen. I could feel, I felt, that I wasn’t getting enough air.
But then I found research that showed that oxygen levels did not decrease as a result of masking—even when the masker was engaged in strenuous exercise (a category in which I don’t think even energetic shuckeling belongs).
And so I realized that it was really just the discomfort of breathing warm air and enduring fogged eyeglasses that argued against the public health benefit of wearing a mask. I was being a shul snowflake.
Though there are the inevitable gadflies who claim there is no benefit to masking, the evidence for its helpfulness in stemming the spread of infections is compelling. To be sure, there is only limited evidence that mask-wearers are less likely to contract COVID-19, but the real benefit of masking is to prevent infected but asymptomatic people from spreading the virus—in other words, to protect others. For that, there is ample evidence, both from lab experiments and, more importantly, from analyses of the rate of virus spread in communities and countries where masking is routine and others where it is spotty.
And so masking in groups is, most simply put, an act of chesed.
Then there is the public perception. Although I write as a private individual, my day job is with Agudath Israel of America, where I interact with the media and the public. The image of the chareidi community, despite the fact that it is very large and very varied, is that its members shun masking. That is a problem.
Because—at least to the limited extent that the perception of chareidi mask-shunning is true—it gives people, other Jews and non-Jews alike, the impression that our community doesn’t care about others.
At the keynote session of Agudath Israel of America’s recent (virtual) national convention, the organization’s executive vice president, Rabbi Chaim Dovid Zwiebel, offered a heartfelt, impassioned reiteration of the imperative to follow current health authorities’ advice, declaring that religious Jews who disregard precautions like masking and distancing not only potentially harm the health of others but bring about the opposite of the fundamental Jewish imperative to make “Hashem’s Name beloved to others.” Chalilah on both counts.
Personally, ever since I’ve become a masked man, I have come to better appreciate something my dear father, a”h, would often say. And having been yanked by the Soviets at the start of World War II from the Vilna yeshivah in which he had been studying and banished with his friends and their rebbe to the frozen taiga of Siberia, he was amply credentialed to offer the lesson.
“A person,” he taught his children, “can get used to anything.”
What he meant was that whatever new situation might confront us, it should never be seen as an insurmountable obstacle. With equanimity and time, we can handle things we never would have imagined were handleable.
As challenges go, wearing a surgical mask around others rather pales compared to chopping wood in 40-degrees-below-zero weather. But the lesson is the same.
And indeed, now I’m so accustomed to my mask that I sometimes even forget that I’m wearing it.
Many hands are being wrung over what, oy vey, the “new normal” might be for perhaps even years to come. I understand the angst.
But I imagine my father just saying, reassuringly: “Don’t worry, you can get used to it.” l 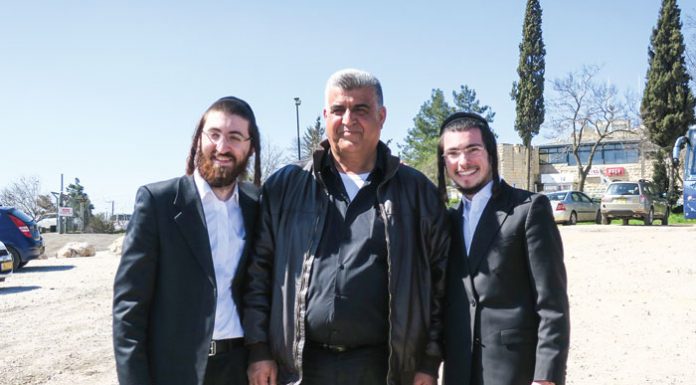 Reunited with Their Rescuer

Saving Moishy // She would do anything to spring her beloved...