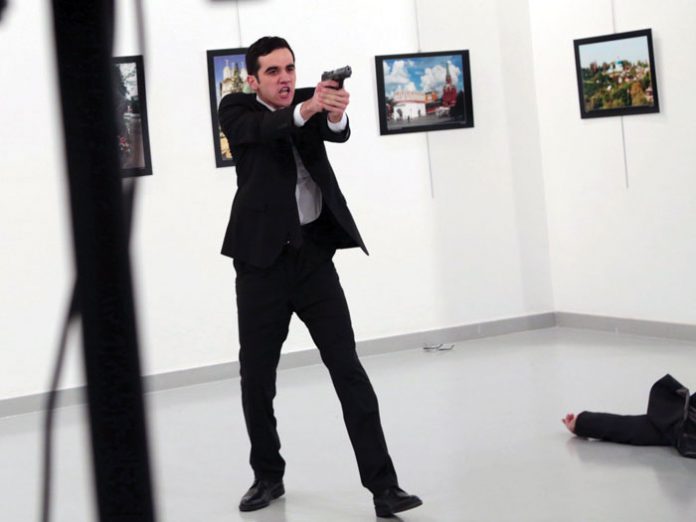 The Russian ambassador to Turkey was shot in plain sight last week. While standing at the podium at an art gallery in Ankara, Andrey Karlov fell to the ground, mortally wounded. The unflinching camera recorded the awful, irrevocable instant when a human life was snuffed out in a hail of bullets. A young man in a dark suit, surprised to still be alive, tried to justify his crime. He waved his arms menacingly, the gun still in his hands, and screamed that “we should not forget.” “Aleppo!” “Syria!”
The critical question remains, was this an assassination or a suicide that was recorded for all to see? Was it murder or a self-inflicted wound? I think the answer is yes—yes to both.
We watched the murder. Behind the elderly diplomat stood a young man, clean-shaven, short hair, well-dressed in a suit and tie. He looked like a secret service bodyguard, which he was. His identity card said that he was a member of the riot police, but he was actually assigned to the protective service of the president of Turkey—he was a bodyguard for President Erdogan himself.
That day he was off duty, attending the opening of an art gallery where the Russian ambassador would be speaking. He moved off camera and came in from the side. It was hard to tell from the camera angle, but it looked like he fired nine shots from a distance. A trained assassin would have come in close and aimed his pistol below and just behind the ambassador’s right ear, where it would find the best target—the medulla oblongata, the one point in the brain where life can be instantly extinguished.
Bodyguards and assassins are usually trained to use the medulla oblongata as their target point in rescue situations where a kidnapper is holding a gun to a hostage’s head. When shot in the medulla oblongata, the kidnapper dies before his brain can tell his trigger finger to shoot the hostage.
On the video, the crack of bullets was heard, but the pistol was not in view. The ambassador’s life ended before his body hit the floor. The shooter came back into the camera frame to check whether his target was dead. He was not a professional assassin. He did not drop his gun and walk away. Nine shots indicated a nervous cop, a man with a gun and a grievance, who kept firing until his clip was empty.
Exactly what the well-dressed shooter shouted about was not clear at first. Reports say he spoke in Turkish, Arabic and Russian. The BBC issued a breaking news bulletin that summed up his message as one of “revenge.” Some media outlets disagreed with that synopsis. But any fact-checker asked to determine whether the BBC’s on-air summary of the translation was accurate, objective and fair would have to conclude that it was. “Revenge” describes the gist of the shooter’s statement. I cannot think of a better word to convey the shooter’s response accurately.
Even Putin agrees with me. The Russian press service, no liberals here, also translated the shooter’s statement as a call for revenge:
“On Monday, police officer Mevlüt Mert Altintas, who was serving in the special forces unit in Ankara, reportedly shouted, ‘Only death can take me from here’ as he protested Russian involvement in Aleppo with slogans in both Turkish and Arabic after gunning down the Russian ambassador as he was giving a speech at an Ankara art gallery. He vowed revenge against ‘all who have a part in the oppression,’ in reference to Syria.”
However, during a press conference with Albanian President Bujar Nishani in Ankara on Wednesday, Erdogan had a different take on who was responsible for the murder, challenging Moscow’s statement. Erdogan said, “The assassin of the Russian ambassador is obviously a member of FETO. There is no need to hide it.”
FETO is an abbreviated term coined by Erdogan’s Justice and Development Party (AKP) government to refer to members of the Fethullah Gülen Terrorist Organization.
Sure—the Gülen gang did it. That’s the ticket! When Putin heard this, he went ballistic. Putin’s propaganda mouthpiece, Russia Today (RT), blasted a stinging reply that makes President-elect Trump’s angriest tweets sound diplomatic by comparison: “A Russian international relations and security analyst said the idea that Gülen followers are behind Karlov’s killing by a Turkish police officer on Monday is an insult to Russian intelligence. The idea that this was done by Gülenists, the bogeyman, the monster under the bed, that Erdogan has used to justify his purges, is frankly an insult to our intelligence,” he said.
The Russian propagandists have good memories about the falsity of Turkish propaganda, particularly when dead Russians are involved. Mark Sleboda, Putin’s unofficial spokesman at RT, recalled, “Turkey made a similar attempt by putting the blame on the Gülen movement when Turkish jets downed a Russian aircraft in November 2015.” Sleboda said the Russian community responded by laughing at Erdogan’s claims that the two pilots who were later arrested for downing the Russian jet were actually Gülen followers. The pilot of the downed Russian plane was shot dead as he descended with a parachute after surviving the attack.

It is a matter of public record that Putin imposed several sanctions on Turkey. Russia even tracked down the Turkish ultranationalist who murdered their fighter pilot. The “Gülen Did It” story was eventually retracted. As the RT reporter noted drily, “After seven months of tension, Erdogan apologized in a letter to Putin in June.”
So the Russians also agree with the BBC (and me) that revenge for the recent Russian atrocities in Aleppo was in fact the direct motive for the retaliation against their ambassador. In explaining this revenge connection, RT quotes a letter from a Syrian resistance group that claimed the assassin as one of their own:
“One of the heroes of the Jaish al-Fatah, Mert Altintas, carried out the execution of Russian Ambassador Andrey Karlov in Ankara, because the world remains silent [on] what is taking place in Aleppo; no support comes to the Muslims in the Levant…and for the victory of the Syrian people.”
Now, for Russian propaganda, that was a bit clever. The Russians don’t actually admit that it was the Russian air force carrying out most of the atrocities in Aleppo. No, that would mean pleading guilty to acts that many nations already consider war crimes. Quoting a letter from the Syrian resistance implies that maybe the Syrian army under Assad or another terrorist group did those heinous things, and suggests that the Russian ambassador was killed only to protest the world’s silence over the death of Muslims. Clever boys, those Russians.