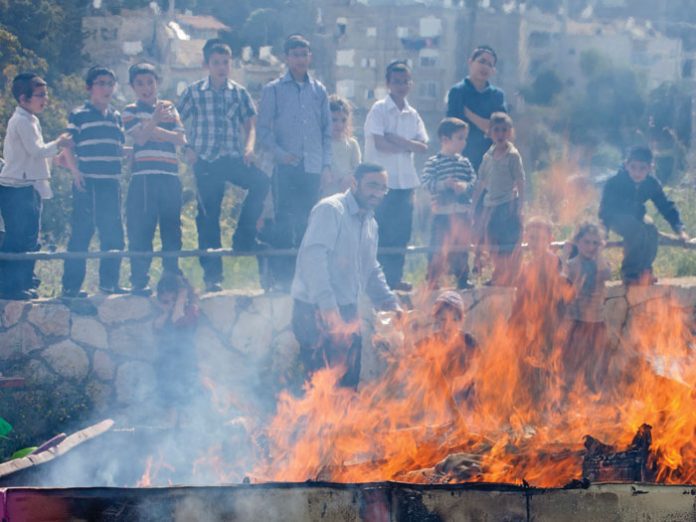 At the urging of leading gedolei Yisrael, a campaign has begun this year in Eretz Yisrael to have everyone sign a heter iska when they come to sell their chametz to their rav before Pesach. The was initiated by the Bais Horaah L’Inyanei Mishpat, led by Rav Pinchas Vind, author of Sefer Bris Pinchas on matters of ribbis.

As Rav Vind explained to Ami, the prohibition of ribbis, taking or giving interest, arises very frequently in everyday life—both in Israel and in the Diaspora. Unfortunately, many people are unaware of the pitfalls, and fail to take the necessary halachic steps to avoid potential Biblical prohibitions.

Anytime anyone pays or receives more than the amount of a loan or debt, he has transgressed the prohibition of ribbis. This is true even if the extra money is given willingly, or even if it is given “as a gift.”

The manner in which it would be permitted to pay back more than one’s debt is through a heter iska. Rav Vind stresses that heter iska is not some sort of “magic charm” that permits the prohibition of ribbis in all circumstances. It also should not be compared to a pruzbul, which permits one to collect debts after a shemittah year without concern. Rather, it is a halachic agreement between the two sides of a deal that the loan be transformed into a capital investment. Basically, the money is no longer defined as a loan, but as a capital investment in the property of the borrower, which allows the lender to receive profit. For example, if someone wishes to purchase a home and cannot do so without a mortgage, it would be forbidden for him to simply borrow money from a Jewish-owned bank and pay back the mortgage with interest. The heter iska agreement makes the bank a silent partner in the house the borrower is purchasing. Thus, there is no loan, only a capital partnership. It is now permitted for the bank to collect dividends on their investment, as this is considered profits and is not considered interest.

Understanding the construct of a heter iska, it is obvious that it only works if the borrower owns some form of property, or is using the borrowed money for some form of business deal that the lender can be considered a silent partner in. If the borrower has no property or business deal for the lender to profit from, there is no way to permissibly give the lender any share of the profits—as there are no profits. Therefore, such a heter cannot apply to a young bachur or girl or newly married couple who have no property or business dealings. Rav Vind explains that the only solution for such young people is if their parents agree to give them ownership of part of their property to allow them to use it for a heter iska.

However, the rule is that only the borrower needs to own some form of property, and the lender does not. When one opens an interest-bearing bank account, he is the lender and the bank is the borrower. With a proper heter iska, it would be permissible for anyone to open such an account.

In the Eye of the Firestorm: What it was like in the Jewish community of Minneapolis, at the epicenter of the unrest

The Parshah of Shidduchim // Guidance from Our Gedolim By Naftali...