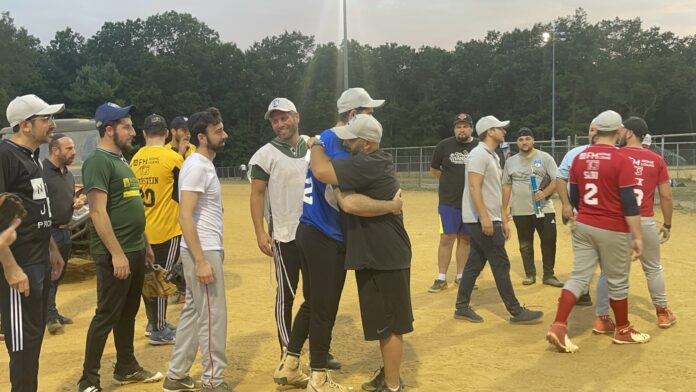 Who knows? Maybe this is the reason LBA was founded. To bring a Jew back to his roots.”
Shimon Friedman, founder of LBA leagues, is sitting in his office, overlooking Avenue of the States in Lakewood, NJ.
I’ve come here to hear, firsthand, the story of Carlo Michael Tanzano.
As we speak, Carlo is in a hospital in Philadelphia, recovering from a six-hour surgery in which a tumor was removed from the upper part of his spine, bordering the brain stem. Baruch Hashem, the surgery was a success. He’s made it this far.
Before we start the story, though, I need to explain who Carlo is and how he came to have a relationship with the Lakewood community. And for that, we need to go back five years, to the beginnings of the Lakewood-based LBA, which runs a variety of sports leagues for children, teens and adults.
“My father, Rav Shmaya Friedman, is a mashgiach at a yeshivah in Lakewood. Five years ago, during the summer bein hazmanim, the yeshivah let me use the gym for an after-camp program for boys. I organized basketball games at two different times during the evenings; the boys would come, paying $5 per game to play. I split the money with the yeshivah. I saw how great it was for the boys to have structure and have the ability to gain those extra boosts of confidence after learning new skills. It was a very productive summer and I wanted to grow it.”
That year, Shimon launched LBA with six basketball teams. The following year, he added football, and then a summer baseball league.
But to run a baseball league, you need umpires. And that is when he met Carlo, originally making the connection through a sports agency.
“Umpires are an important part of a baseball game. The umpire is the one calling the balls and strikes, and if someone is out or safe on the bases. He’s running the whole game. It makes it fun and competitive versus a pickup game that you might not take as seriously.”
Shimon really didn’t know anything about Carlo’s background when he first hired him four years ago. Maybe, perhaps, he vaguely remembers someone mentioning that Carlo has Jewish family, but Shimon didn’t think anything of it—people often say they’re related to someone Jewish—and he assumed Carlo was Christian. As the league grew, Carlo got to know more and more men and boys in the Lakewood community. And his position grew as well—with more teams and more games, Shimon needed more umpires. Carlo became the head umpire, in charge of all the new hires and scheduling. The umpires were all colleagues whom Carlo knew, but their backgrounds were diverse: Latin Americans, African Americans, and Italian Americans. This grew to be a big job—this past season, there were 45 baseball teams in different age ranges playing weekly, and Carlo had to make sure there was an umpire assigned to each game.
Carlo and his team have been behind the plate at every kids’, teens’ and adults’ LBA baseball game. They’ve seen firsthand how Lakewooders of all ages show sportsmanship that’s unparalleled anywhere else.
“I umpire all over,” Carlo told Shimon, “and I never saw a group of people who act so nicely. I’ve never met people who are so respectful.”
Often, when he’s running errands in Lakewood, men will come over to say hello.
“I don’t know who they are, but they say hello to me!”
In the kids’ leagues, there was something else that the umpires saw that was unique to a Jewish league. They saw how the stronger, more athletic kids try to build up the weaker kids and make them feel good—how encouraging they are to their teammates. They saw how kids transform over the season because of this; gaining confidence along with skills. And while the umpires might not know how much kids—and adults—appreciate the availability of a healthy, kosher outlet, this positive impression was vital to send the events of this summer into a domino effect.
Because, until a couple of weeks ago, Shimon and all the players simply thought they were making a kiddush Hashem. They didn’t realize they were setting the stage for bringing a Jew back.

This Yom Kippur, It’s Your Business

Addressing the hate // An exclusive interview with Mayor Bill de...