The gaavad was born in a small Czechoslovakian town near Pressburg into a family of Oberlanders, who followed the minhagim of Ashkenazic Jews of the region. Although he later came to adopt a number of chasidishe ways, he kept many of his Oberlendish customs throughout his life. For example, he treasured the niggunim he had heard as a child at his father’s table and sang them every Shabbos, making sure not to change the tune one iota. Although his father, Reb Shlomo Weiss, was a working man, he was a talmid of the Shevet Sofer and dedicated every spare moment to Torah and mitzvos, and Rav Weiss would often speak of him and attribute his early growth to both parents.
In 1939, as a child of 12, Rav Weiss escaped Europe as part of the Kindertransport to London. Tragically, almost his entire family was killed and he never saw them again. This was the first in a series of heartbreaking events that befell the gaavad, including the illness and death of his wife and his own ill health. Yet despite his many difficulties, he was always b’simchah and never spoke about his experiences. In fact, Rabbi Moshe Bergman, a close talmid of the gaavad, relates that it wasn’t until his father wanted him to enter shidduchim that Rav Weiss made an oblique reference to his suffering. When Rabbi Bergman told the gaavad that he wasn’t sure if he was ready for a such a step, Rav Weiss replied, “Moishy, I don’t have to tell you what I went through when I was your age. I didn’t have parents to care for me. You should thank Hashem that you have parents, and rely on them to know what’s best for you.” Rabbi Bergman was shocked, realizing that Rav Weiss had only said this in order to relay an important lesson.
In London, Rav Weiss studied for a number of years in the famous “Schneider’s Yeshiva,” led by Rav Moshe Schneider, zt”l. He considered Rav Schneider his rebbe muvhak and always spoke reverently of him. “When he spoke about Rav Schneider,” Rabbi Bergman recalls, “it was as if he was in a different world!”
Eventually, Rav Weiss made his way to the Gateshead Yeshiva and continued learning in its kollel after he got married. There he became extremely close with Rav Eliyahu Eliezer Dessler, zt”l, the author of Michtav Mei’Eliyahu. The gaavad always said that he learned a number of life’s lessons from Rav Dessler, including the importance of a ben Torah maintaining an air of nobility and cleanliness. To that end, he was always dressed impeccably, with shoes polished to a shine and his clothes pristine. After Rav Dessler moved to Eretz Yisrael, Rav Weiss took his place as head of the kollel. A few years later, he returned to London, where he served as a rosh yeshivah and rav. He then moved to Antwerp, where he was a rav and dayan for over 35 years.
Twenty years ago, after the passing of Rav Yisrael Moshe Dushinsky, zt”l, Rav Weiss was chosen to succeed him as gaavad of the Eidah Hachareidis of Yerushalayim. He also headed his own beis midrash, yeshivah and kollel.
The gaavad’s Torah brilliance is clearly evident from his sefer, Shaarei Tuvia on Chumash and sugyos in Shas. A number of sefarim have also been published by talmidim, including his halachic rulings and stories that he would relate about gedolei Yisrael.
The gaavad’s home was open to bachurim from chutz laaretz who were studying in Eretz Yisrael, and many English-speaking boys were drawn to him. Each week, upwards of ten bachurim would eat at his home on Shabbos, seizing the opportunity to be in his presence.
Rabbi Yehuda Leib Altusky, one of the regulars in the gaavad’s home, recalls that although Rav Weiss’ public persona was regal and aristocratic, garbed in his golden caftan, when he came home and switched to his tish chalat, the bachurim felt like he was their beloved zeide. He would go around the table and ask each bachur where he was from, always finding some common connection to make them feel comfortable. He would also ask what they were learning and speak on that topic, getting up to find relevant sefarim on the bookshelf and refusing to allow the bachurim to do it for him.
When he was served his food, he wouldn’t begin eating until each bachur had received his portion. This was in keeping with his overall approach of giving honor and respect to every person. He would even walk the bachurim out after the meal. Although he honored everyone this way, if a talmid chacham visited his home he would honor him even more, accompanying him all the way to the street and standing there until the car had pulled away. A talmid recalls that on one occasion, Rav Zundel Kroizer, zt”l, came to visit him to discuss an important matter. After Rav Weiss walked Rav Zundel out, his rebbetzin asked him who that man was, and he began to extoll his greatness, stating that he had been greatly inspired to see Rav Zundel learning all night on leil Shabbos. “What’s so special about that?” the rebbetzin quipped. “You do that every week.”
On another occasion, Rav Chaim Kanievsky, zt”l, made a special trip to visit the gaavad on Chol Hamoed. After he left, Rav Weiss was very moved and said humbly, “I don’t know what zechus I have for the gadol hador to come visit me.”
His love and respect for every Yid was evident in the way he made each individual feel good about himself. A bachur who was going through a hard time and was on the verge of being thrown out of yeshivah once came to speak to him. Before beginning the conversation, the gaavad gave the boy a compliment that made him feel so good about himself that he promised to try to do better in yeshivah and not let the gaavad down. 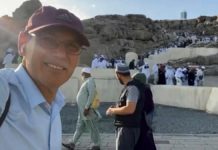