The metaphor seemingly hinted at by that fact is that klal Yisrael became “divorced” from Mitzrayim, to which it had been, in a way, “married,” a reflection of our descent there to the 49th level of spiritual squalor.

But the apparent “divorce” of klal Yisrael from Mitzrayim is followed by a new metaphorical matrimony. Because that is the pointed imagery of the event that, mere weeks later, followed yetzias Mitzrayim: maamad Har Sinai.

Not only does Rashi relate the Torah’s first description of a betrothal —Rivkah’s—to that event (Bereishis 24:22), associating the two bracelets given her by Eliezer on Yitzchak’s behalf as symbols of the two luchos, and their ten geirahs’ weight to the Aseres Hadibros.

And not only does the navi Hoshei’a (2:21, 22) describe mattan Torah in terms of betrothal (v’eirastich li…, familiar to men as the pesukim customarily recited when wrapping tefillin on our fingers—and to women, from actually studying Nevi’im).

But our own chasunos themselves hearken back to Har Sinai: The chuppah, say various sefarim hakedoshim, recalls the mountain, which Chazal describe as being held over our ancestors’ heads; the candles traditionally borne by the parents of the chasan and kallah are to remind us of the lightning at the revelation; the breaking of the glass, of the breaking of the luchos.

In fact, the Birkas Eirusin itself, the essential blessing that accompanies a marriage, seems, as well, to refer almost explicitly to the revelation at Har Sinai. “Blessed are You, Hashem, … Who betrothed His nation Yisrael through chuppah and kiddushin”—“al yedei” meaning precisely what it always does (“through the means of”) and “mekadeish” meaning “betroth,” rather than “made holy” like “mekadeish haShabbos”).

The metaphor is particularly poignant when one considers the sole reference to divorce in the Torah.

It is in Devarim (24:2) and mentions divorce only in the context of the prohibition for a [female] divorcee, subsequently remarried, to return to her first husband. The only other “prohibition of return” in the Torah, strikingly, is the one forbidding Jews to return to Mitzrayim (Shemos 14:13, Devarim 17:16). Like the woman described in Devarim, we cannot return, ever, to our first “husband.”

More striking still is the light thereby shed on the confounding Gemara on the first daf of Maseches Sotah.

The Gemara poses a contradiction. One citation has marriage-matches determined by Divine decree, at the conception of each partner; another makes matches dependent on the choices made by the individuals—“l’fi maasav—according to his merits.”

The Gemara’s resolution is that the Divine decree determines“first marriages” and the merit-based dynamic refers to second ones.

The implications, if intended as such regarding individuals, are, to say the least, unclear.

But the import of the Gemara’s answer on the “national” level—at least in light of the Mitzrayim/Har Sinai marriage-metaphor—provides a startling possibility.

Because klal Yisrael’s first “marriage,” to Mitzrayim, was indeed Divinely decreed, foretold to Avraham Avinu at the Bris Bein Habesarim (Bereishis 15:13): “For strangers will your children be in a land not theirs, and [its people] will work and afflict them for 400 years.”

And klal Yisrael’s “second marriage,” its true and permanent one, was the result of the choice Hashem made—and our ancestors made—by refusing to change their clothing, language and names even when still in the grasp of Mitzri society and culture—and their willingness to follow Moshe into a dangerous desert. And, ultimately, when they said “Naaseh v’nishma,” after which they received their priceless wedding ring under the mountain-chuppah of Har Sinai.

And a fascinating coup de grâce: The Gemara in Sotah, referenced above, describes the challenge of finding the proper mates. Doing so, says Rabbah bar bar Chanah in Rabbi Yochanan’s name, is kasheh kikrias Yam Suf—“as difficult as the splitting of the Sea.” 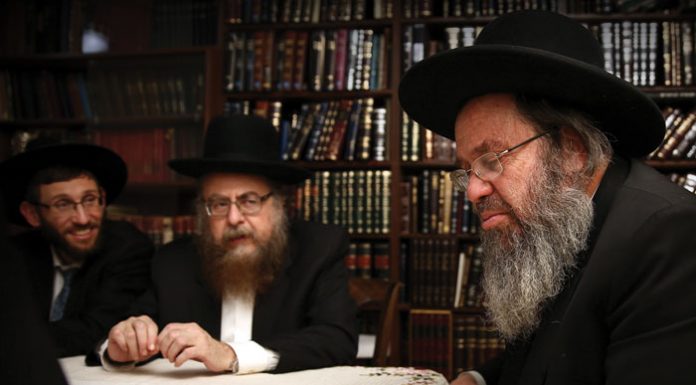 Q&A with White House Press Secretary Jen Psaki // On the...