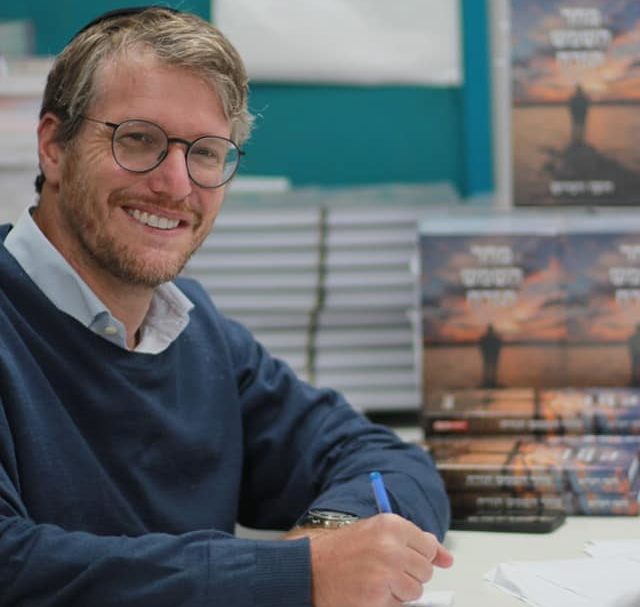 When Dovi Weinroth’s well-known wife Chani was first diagnosed with cancer, she was just 25 years old and the mother of two toddlers and an infant. In the nine years that followed, Chani became a public figure in Israel, lecturing and writing openly about her illness until her death in November 2017. Now, four years later, attorney Dovi is the author of the recently published Machar HaShemesh Tizrach (Tomorrow the Sun Will Rise), in which he describes coping not only with the loss of his wife, but also that of his father, Dr. Yaakov Weinroth. Dr. Weinroth was one of Israel’s most famous lawyers; he and his daughter-in-law died within a year of each other.

Dovi shares a stirring message that his father imparted after Chani’s death: “Dovi, listen. You remind me of an amateur boxer who makes the mistake of trying to get up right after a fall. An experienced boxer gives himself a few moments to recover. Knowing when to rest and when to act and gather the pieces is one of the secrets we learn in life. You are currently experiencing something similar to a knockout, and part of the recovery is not just to gather your strength and pull yourself together, but also to know how and when to do that.”

It was a message that became even more meaningful after his father’s passing only months later, also from cancer. Machar HaShemesh Tizrach includes insights that Dovi gained from his wife and father, lessons that now help him to cope emotionally and mentally with his losses, to continue to live, and to smile and even rejoice—but also sometimes to break down, which is part of the process, too, Dovi says.

“I wrote this book because I couldn’t not write it,” he says. “I’ve been accumulating life experience, insights, and wisdom, and it was all bursting inside me. I felt it was an injustice not to pass on these insights to the world. There is power in this book. I believe its messages can help anyone out of a personal crisis.”

Chani chose to face her own crisis head-on, and at a certain point, she accepted that placing herself in the public eye would enable her to infuse others with emunah. She would not close her eyes to the inevitable, but she also refused to allow her terminal diagnosis to take over. Chani was determined to lead a full life, no matter how little time was left. At one juncture, she was given six months to live. Ultimately, it would be close to a decade.

“Many people become sick, but not many are willing to look the malach hamavet in the eye,” Dovi says. “Chani was not afraid of death, and with the short time she had left, she taught so many people real life lessons about focusing on what is truly important.”

He emphasizes that though Chani became well known, that was never her goal. “She wasn’t looking for fame,” he says. “She said to the cancer, ‘You may have defeated my body, but I will not let you win twice. I will conquer you in spirit.’ Chani’s spirit was so strong, her influence so great, and her leadership so powerful and sincere, that she reluctantly found herself becoming famous.”

Dovi adds that Chani avoided using certain expressions connected to cancer. “Chani didn’t like the terms ‘war on cancer’ or ‘beating cancer.’ She did not see it as either a war or a victory. She also did not like it when patients called themselves sick. She would say that a person is not sick, just dealing with an illness, the same way that a person deals with being single or having financial difficulties.”

As Chani gained recognition as a speaker and author, she was continually contacted by families of cancer patients asking her to visit their ill relatives. She developed connections with hundreds of other cancer patients and provided significant emotional support, Dovi says.

“Being a leader like Chani requires a lot of mental strength,” he notes. “In a certain sense, she had a lot of mesirat nefesh for the klal. Most of the cancer patients she befriended died before she did. You can’t just get over such deaths with platitudes. First, it’s a chevrah, and second, each one is another reminder that you won’t be needing this support system for very long, anyway.

“Chani attracted thousands of people from all walks of life and heard about their secrets and their own personal crises that no one else knew about,” Dovi adds. “The fact that she did not judge anyone caused people to open up to her.”

Dovi says that Chani stood out because of her “extraordinary verbal ability and her gift for reaching people.” She was also a true out-of-the-box thinker, and people flocked to her for advice. “To this day, people tell me, ‘I wish Chani were here even for a few minutes to tell me what to do.’

Kosher In The Lab // A Food Scientist Reveals the Secrets...