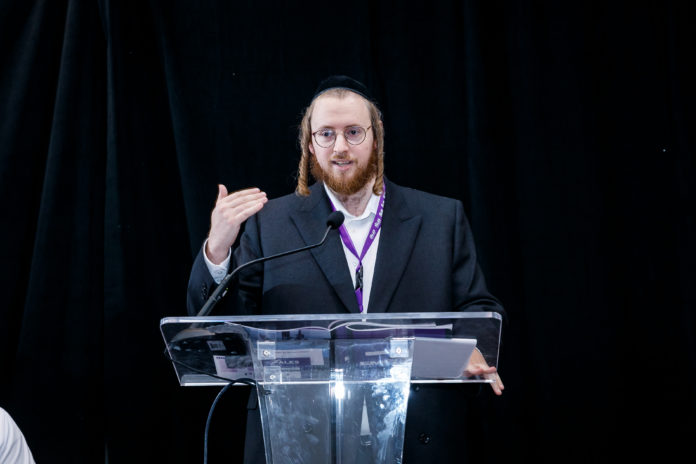 A few months ago, I hosted a panel at the Compass Sales Seminar in Stamford, Connecticut (which I wrote about in Ami Issue 522). One of the panelists who was scheduled to appear was Sruly Engel, founder of Engel Financial Services, a company that provides insurance policies. Due to a last-minute scheduling conflict, Sruly was unable to appear on the panel. During the seminar, I must have been approached by at least ten people who expressed their disappointment over not getting to hear from Sruly. “Sruly is something special,” they told me. “He is an incredible salesman.” “He has more clients than anyone else I know.” And on and on…I was intrigued and knew I had to get him in “Lunchbreak.”

Throughout our conversation, I was struck by the fact that Sruly, this master salesman, was soft spoken. And his sales advice didn’t really involve secret sales tactics at all. Instead, it was full of common sense.

Sruly has seen a lot of success as a salesman—selling close to 400 policies this year—and he has devised a strategic way to delegate, allowing him to focus on what he does best: talking to people, which is part of the recipe for his success.

“I was born and grew up in Montreal. I’m the youngest of six; I have five older sisters. I learned in Belz yeshivah until I was 16, and then I went to learn in Vizhnitz. I learned for one zman in Sochatchov in Eretz Yisrael and got engaged after that zman. My wife is from Monsey, so I moved to Monsey and learned in the Vizhnitz kollel there for a few years.

“When we had our first child I realized that we needed a car, but in order to have a car, I needed the money to buy one. I found a local playgroup that was looking for a driver, and I took the job to help cover the cost of the car. I drove the kids to playgroup in the morning, went to kollel, and drove the kids home during my afternoon lunch break. I received calls from two other playgroups and began to drive for them, as well. I started getting other driving requests, too. Eventually I had about 12 steady driving jobs and was making good money. But I had a real issue with my line of work: I could not go away. If I wanted to take a day off or even if I had to miss part of the day, I had to make many phone calls to get someone to take over my route. It was very complicated. I had this issue every time I wanted to visit my parents in Canada.

“My father was involved in the insurance business from the time he was 23 years old, and he always pushed me to look for a different job. Of course, he encouraged me to try getting into the insurance industry. However, although my job as a driver didn’t leave much room to get away, I did enjoy it. We lived in our own small apartment and I didn’t feel tremendous pressure to pursue a new line of work.

“In 2009, when I was 22 years old, a cousin of mine, Avi Stern, told my father that he thought I would make a great insurance agent and that I would fit in at BFG, an insurance company that focuses on life insurance. I called them and scheduled an interview. I met a man named Shrage Posen and had what I thought was a good interview. I then had to take a mandatory questionnaire designed to see if I would make a good life insurance agent. The test consisted of multiple choice questions and included questions about how much I wanted to make as an agent. I circled the $50,000 option, because I didn’t have any major aspirations. After the test, I was told I did not have the correct personality to make it as an agent. I was not terribly disappointed; nisht iz nisht. I went back to driving.

“Half a year later, BFG held a symposium to attract new agents and my father encouraged me to attend, but I was hesitant. I told him that they weren’t looking for people like me. He encouraged me to call them anyway, which I did, and they turned me down. My father called Shrage Posen and convinced him to give me another shot. ‘What do you have to lose by letting him attend?’ he asked. Shrage said okay.

“I went to the symposium and really liked what I saw. I liked the concept of helping people through protecting their loved ones. I met with the BFG brass and told them I wanted to try being an insurance agent. But I said, ‘Don’t hire me because my father made a phone call. If you really think it’s not for me, then just let it go.’ A few days later, I got a call from a manager at BFG. He told me that they had recently added several agents who had failed the personality test, and they were doing well at the company, so they would give me a shot. The rest is history.

“My first day as an agent was a Tuesday, and I had four meetings set up with people I already knew. At my first insurance meeting ever, I walked in and the person said to me, ‘I just quit smoking and I’m ready to buy insurance.’ I just started talking to him about his life and that ended up being a good experience for me, simply schmoozing with someone and getting to know him.

“It was not easy for me in the beginning, and there were times when I wanted to quit. I understood early on that to develop your name, you need to take the time to build relationships, but it was difficult to wait for my efforts to bear fruit. When I reached a breaking point and was thinking about quitting, I went to speak to my father. I was very close with him, and we would often discuss things going on in my life and business. He passed away suddenly seven years ago and I miss him terribly.

“My father laid out the scenario I would face if I left and got a ‘normal’ job. He said to imagine I got a job at some company where I would work hard and full days. He rightfully pointed out that even if I was one of the lowest-ranking agents at BFG, I would make the same amount of money from less work, and I would have space to grow. So I kept at it.

“One of the first things I started to implement was to impart to my clients any important knowledge that could help them, even if it wasn’t directly related to insurance. For example, once I was talking to a client who told me that even though his company was making money, he did not have enough to make ends meet. I had recently come across the concept of ‘profit first’ by Mike Michalowicz, so I shared it with him. The concept is that one should pocket ten percent of his business for himself and figure out how to make it with the rest of the cash flow. I helped the client figure out his business expenses and how to take the ten percent out every month. It had nothing to do with insurance, but I thought it could be useful to that client, and he appreciated it.

“I have seen agents come into the business and make more in two weeks than I make in two years, but 13 years later, baruch Hashem, I am still in business. In this business as in many industries, many of the hotshots lose their fire after a while, but the people who do the right thing and the ‘boring’ thing are able to keep it up. I believe the right thing can be boiled down to a few words: helping your client. Helping someone does not mean selling him a policy that makes you the most money. Helping him means helping him. It can mean looking up an old policy he has or finding out if he has free life insurance policies from his job. When you focus on helping the person and getting him to trust you as a person, not only as an agent, that’s where the magic happens.

“Of course, every insurance agent wants to sell a policy, but that cannot be your focus when meeting clients. My goal is to simply meet the person and see if there is an opportunity. The sales will come. If you are an agent who is solely focused on sales, then you aren’t looking to help the person. For example, let’s say an agent walks into a meeting and soon discovers that the person has an illness that would prevent him from getting a policy. If you are only focused on making the sale now, then you walk out five minutes later.

“There is a big difference between being a salesperson and building a business. I am trying to build a business. My goal is to build up my name, and that can only happen when people believe that you have their best interests in mind. I will stay as long as needed with any potential client, even if the person tells me he is sick, which would make it hard for me to sell him a policy. I genuinely believe I win in this business even when I don’t win, meaning even if I don’t get the policy. Every connection I make helps my business grow, regardless of whether that particular person signs a policy. That’s the key to sales—meet more people. More people knowing you and liking you leads to more business.

“I did things on my own until the end of 2011. I had a few secretaries, but none of them worked out until I hired my first assistant, Yitzi Mermelstein, in 2014. He helps focus on the details of the business. Hiring Yitzi doubled my business production almost overnight. I entrusted him with hiring more people, too.

The Évian Conference Failed // And Then the Holocaust Began