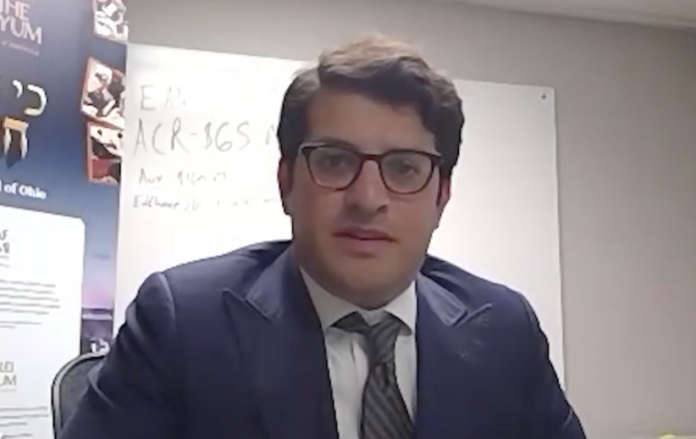 Should anyone still need convincing that “progressive” stances on Israel are at times tainted with… something less than enthusiasm for Jews… former Ohio State Senator Nina Turner’s concession speech should do the trick.

The race that Ms. Turner lost on August 3 was in a special Democratic primary bid to fill an open House seat in Ohio’s 11th congressional district, which includes much of Cleveland. The open seat was created by former Representative Marcia Fudge’s acceptance of the position of Housing Secretary in the Biden administration.

The contrast between Ms. Turner and the come-from-behind winner, Shontel Brown, was stark. Ms. Turner served as co-chair of the Bernie Sanders 2020 presidential campaign, vulgarly disparaged Joe Biden and was endorsed by the left-wing political group Justice Democrats; Ms. Brown was backed by Hillary Clinton and the leaders of the Congressional Black Caucus, including Majority Whip Jim Clyburn and chair Joyce Beatty. (Both Ms. Turner and Ms. Brown are African-American.)

And Israel was very much a point of contention between the two candidates. Back in May, amid that month’s Hamas attacks and Israeli response, Ms. Brown endorsed Israel’s “right to defend its citizens.” Ms. Turner, who has called for conditioning aid to Israel, retweeted a social media post accusing the Jewish state of apartheid.

Ah, yes, back to the loser’s concession speech. Ms. Turner fell a bit short of the gracious mark. “I am going to work hard,” she said, speaking to supporters in a Cleveland suburb bowling alley, “to ensure that something like this doesn’t happen to another progressive candidate again.”

And then she offered some telling, if indecorous words. “We didn’t lose this race,” she declared, in the latest show of political sore losership and revisionism. “Evil money manipulated and maligned this election.”

She was referring, of course, for any ears tone-deaf to distasteful tropes, to Jewish money.

As it happens, though, Ms. Turner herself had a sizable warchest that held many more Benjamins than her opponent’s. But as the race proceeded, pro-Israel groups like Democratic Majority for Israel sent funds into her opponent’s coffers, allowing Ms. Brown to do television advertising and such, allowing her to inform voters about the differences between her and her opponent.

With both candidates awash with cash, the contest hinged on—as elections well should—voters’ perceptions and choices.

And, in particular, those of Jewish voters. In the weeks before the election, Cleveland Jewish groups launched “get out the vote” efforts, and rabbanim urged their congregants to make sure they went to the polls. Jewish volunteers came out in force, using email and social media as well as old-fashioned door-to-door campaigning.

Rabbi Yitz Frank, Agudath Israel of Ohio’s executive director, said that the voter apathy usually apparent in a special election was absent, and that the number of volunteers and the “sheer energy” apparent in the Jewish community before the election were striking.

The election results indicated that those efforts had likely paid off. Jewish enclaves like Beachwood, University Heights and Cleveland Heights had among the highest turnouts, according to the Cuyahoga County Board of Elections.

Recognizing that fact, in her victory speech, Ms. Brown enthusiastically thanked “my Jewish brothers and sisters.”

She also recounted a 2018 tour of Israel that she has described as foundational. “You can appreciate the vulnerability of the state,” she said, “and that has given me the understanding of the importance of the US-Israel relationship.”

The Democratic candidate will face the Republican nominee, Laverne Gore, in November, but Ms. Brown is overwhelmingly favored to win in the heavily Democratic district.

Even more important, though, than a likely new member of the House of Representatives who forthrightly defends Israel, the recent Ohio election was widely seen by political observers as a proxy battle between the progressive and traditional elements of the Democratic party. And it seems to show which way the party wind is blowing.

May that continue to be evident in future elections.