Patrisse Cullors recently resigned from the lucrative (more than $90 million dollars taken in last year) “Black Lives Matter Global Network Foundation” she headed for nearly six years. The self-described Marxist will be focusing on the upcoming release of her second book and a multiyear television development deal.

No word from Karl, who has been interred in North London’s Highgate Cemetery since 1883, but it’s safe to say he would be less than gratified by his disciple’s decidedly capitalist aspirations, which include her purchase of a number of homes in recent years: three in Los Angeles (one, reportedly, for $1.4 million) and one in suburban Atlanta. So much for her late mentor’s declaration of the need to “abolish all private property.”

Often overlooked is the fact that the Black Lives Matter movement is a broadly decentralized one, its myriad groups across the country unified only in their embrace of that slogan and the goal of ending unwarranted police violence. The “Black Lives Matter Global Network” is only one of the broader movement’s groups, even though it claims primacy among the others and owns the domain name “blacklivesmatter.com.” Most of the ugliness associated with the BLM movement has emerged from the BLMGN.

And, most prominently, from the mouth of Ms. Cullors, who, for instance, told an audience in 2015 that “Palestine is our generation’s South Africa,” and that, “if we don’t step up boldly and courageously to end the imperialist project that’s called Israel, we’re doomed.”

She went on to describe support for Palestinian Arabs as a “crucial” part of the Black Lives Matter movement, and urged support for Rasmea Odeh, who was convicted for helping place a bomb in a crowded Jerusalem SuperSol in 1969, killing two students. (Released in a prisoner swap in 1980 as part of a prisoner exchange, Odeh was found guilty of immigration fraud and deported to Jordan.)
Ms. Cullors should ponder the words of Martin Luther King, Jr. in 1968:
“Peace for Israel means security, and we must stand with all our might to protect her right to exist, its territorial integrity and the right to use whatever sea lanes it needs. Israel is one of the great outposts of democracy in the world, and a marvelous example of what can be done, how desert land can be transformed into an oasis of brotherhood and democracy. Peace for Israel means security, and that security must be a reality.”

Sadly, there can be no denying that, despite Dr. King’s rational perspective, the hypocritical, anti-Israel former BLMGN leader’s quest to portray Israel as a colonialist apartheid villain has enjoyed success of late. It’s never hard to fan the always glowing coals of Jew-hatred into an angry flame.
And no one should be fooled into swallowing the “anti-Israel doesn’t mean anti-Jewish” inanity.
Yes, theoretically, hating Israel needn’t necessarily entail hating Jews. But attacks on Jews, Palestinian-flag-waving crowds chanting “Death to Jews,” and countless recent tweets with the hashtag #HitlerWasRight would seem dispositive. The anti-Semitism virus evolves, finding new hosts, to quote the Haggadah, “in each and every generation.”
There are, though, other black voices. Like that of Bronx Democratic Representative Ritchie Torres, who recently told journalist Bari Weiss that “Not only is Israel under siege from rocket fire, but the truth itself is under siege. There’s been an ongoing propaganda war and the narrative that is dominating is one that attempts to normalize Hamas and delegitimize Israel”; and who called Twitter “a cesspool of anti-Semitism.”

And those of Senators Tim Scott and Cory Booker, who, along with Senator Jacky Rosen, are launching the first-ever Senate Caucus on Black-Jewish Relations to combat racism and anti-Semitism.

Years hence, we will know whether most Americans of color will have come to adopt the sanity of responsible black leaders or become infected with the unhinged animus of the Patrisse Cullorses of the world.

For now, all we can do is express appreciation to the former, and pray for the utter failure of the latter 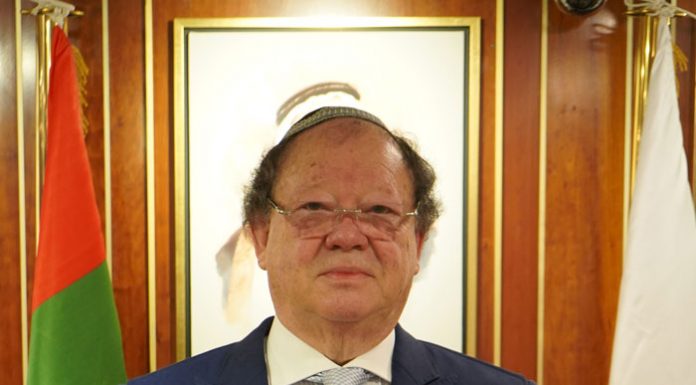 The Making of the Babka // Babka/ Kokosh Hybrid