Rav Yitzchok Scheiner, the longtime rosh yeshivah of Kamenitz in Yerushalayim, was born in Pittsburgh to Polish-born refugees who came to America when they realized there was no future for Jews in Europe. Rav Yitzchok would often tell his talmidim about his personal journey, and how his father had to find a new job every week because he refused to work on Shabbos. Although his father was not a learned man, the family’s commitment to halachah never wavered and they remained frum.
In the late 1930s, Rav Avraham Dovid Bender (the grandfather of Rav Yaakov Bender of Yeshiva Darchei Torah) visited Pittsburgh to raise funds for his yeshivah, and his usual hosts weren’t in town. After doing some research, he heard that the Scheiners adhered to the strictest standards of kashrus and asked if he could stay with them. The rosh yeshivah was 16 years old and had already graduated from a public high school. Rav Bender convinced Rav Yitzchok’s parents to send him to yeshivah in New York. Before that could happen, however, he attended Camp Mesivta for the summer, where he met Rabbi Yitzchok Karp and Rabbi Moshe Yechezkel Samuels, who would repeat Rav Shlomo Heiman’s shiurim. After the summer, they persuaded him to attend Yeshiva Torah Vodaath, where he grew close to Rav Shraga Feivel Mendlowitz and became one of Rav Shlomo Heiman’s prized talmidim. He learned b’chavrusa with Rav Reuvein Grozovsky, who was meshadech him with his niece, the daughter of Rav Moshe Bernstein, a son-in-law of Rav Boruch Ber Leibowitz.

Rabbi Chaim Zev Edelman is the menahel of Cheder Toras Zev in Lakewood. He went to Yeshivat Kamenitz in Yerushalayim at the age of 16.

“I learned in his house every night for two years. The reason we learned there was that after his father passed away he insisted that his mother move in with him, and he was extremely devoted to her. His kibbud eim was unbelievable. Even though he was already over 70 at the time, he insisted on taking care of her personally.
“The rosh yeshivah often reminisced about his time in Torah Vodaas. After he became the chavrusa of Rav Reuvein Grozovsky, I heard from others that Rav Reuven would never say shiur before discussing the inyan with Rav Yitzchok. Rav Yitzchok had never learned Gemara until he was 16 years old, but it took only a short while for him to rise to the top. I attribute this to his legendary hasmadah and intellect. It is also said that Reb Shraga Feivel would consult with him on many chinuch questions.

He was always learning, talking and thinking in learning. Whenever I walked into his apartment, he was engrossed in Gemara, Rishonim and Acharonim. He had a small study. Every inch of wall space was lined with shelves laden with sefarim—and the rosh yeshivah knew the exact location of every sefer. He’d say, ‘Please pass me the fourth sefer on the third shelf in the sefarim shrank next to the window.’ 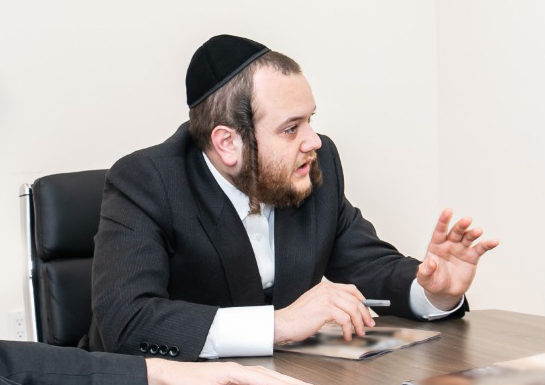 Satmar Solidarity at a Business Expo