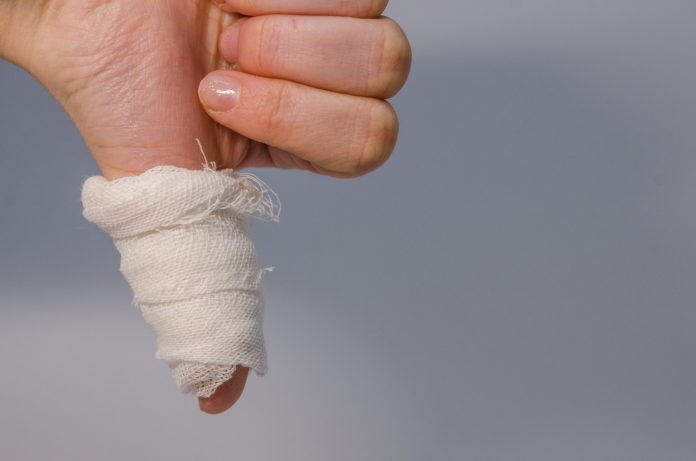 When I got a nasty scratch from a nail in the door, I didn’t think much about it. It was long and deep and very painful, but being an 18-year-old kindergarten teacher, I just slapped on a Band-Aid and continued to go about my business. However, by the next morning I could no longer ignore it. My finger had ballooned into a giant ball of pus and looked like a MRSA infection. It was frightening to see, and the pain was excruciating.
Not knowing what to do, my mother called Hatzalah. They took one look at it and told me it needed immediate attention, so they took me to the hospital.
Once I got there, I was given antibiotics, and the doctor on call explained that it probably happened because the wound wasn’t properly covered and some germs had gotten in. He warned me that if I ever got a cut, I had to cover it right away. It took about a week until the bubble burst and the pus started to drain.
My thumb looked like a shriveled carrot, and I began to appreciate how much a person needs all of his fingers to be in working order. Without my thumb, I couldn’t fasten buttons or write; simple daily tasks were a real challenge. But thanks to the antibiotics, it quickly went back to normal. I breathed a sigh of relief and filed it away in my mind as a freak accident.
A short time later I cut myself with a paring knife. This time I was prepared and immediately covered the wound with a Band-Aid. But the next day the same thing happened. My finger blew up and was filled with pus. I didn’t go to the hospital but I did take the same antibiotics, and again I had to wait until it started getting better. I suffered another week of agony, trying to teach and do normal tasks with one finger out of commission.

The Supreme Court Puts Religious Schools on Equal Footing: Will the...