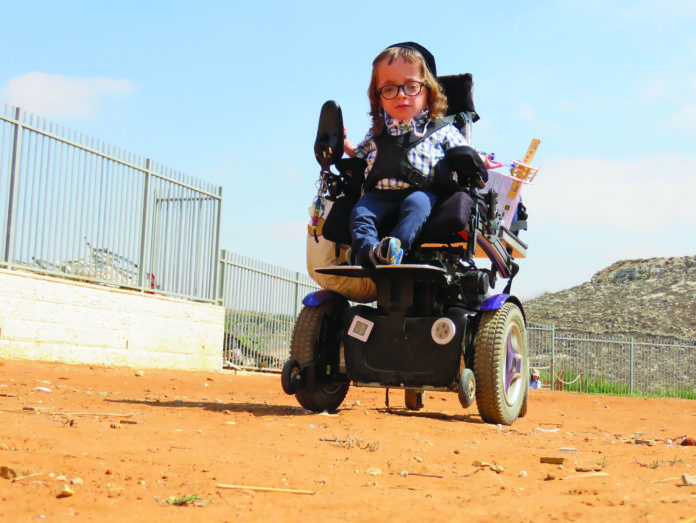 Eleven-year-old Chizki Turnheim has unexpectedly, and perhaps reluctantly, become a public figure. About a year and a half ago, a video was shown at a conference of chareidi school principals in which Chizki, who suffers from osteogenesis imperfecta, a severe bone disease, talks about the willpower that prompted him to attend a “regular” school. The moving video, in which he states, among other things, that “it is not the body that decides, it is the ability that decides,” went viral, turning Chizki into a public figure, which he did not ask for or desire.

In the video, which introduced Chizki, then nine years old, to the public, he looks strong, but he has a tiny body and sits in a very small chair. He has a strap around his waist to prevent him from falling, chas v’shalom, as his bones break very easily.
The small boy tells the principals: “If my principal had looked only at my body and not at my abilities, I would not have reached the scholastic level I have attained; I would have remained at a low level. But children like me want to rise and succeed, just as I did.”

The emotional video brought tears to many eyes in the auditorium of the Nir Etzion Hotel and introduced Israeli society to the amazing phenomenon named Chizki Turnheim, a child who suffers from a serious illness that prevents his body from growing. But he is a fighter, and against all odds he is currently studying in a regular class in a chasidic cheder in his hometown of Modi’in Illit.

Since then, Chizki has appeared in quite a few videos. There’s the video that he filmed about six months ago, at the beginning of the coronavirus, trying to soothe the confused populace in his own special way. In another video, he sits at the head of a table with IDF soldiers near the Me’arat Hamachpeilah in Chevron, and in another he documents his journey to Uman.

I meet Chizki near his house in Modi’in Illit. But before we go inside to talk, he wants to daven Maariv with an outdoor minyan that is organized for him outside his house. “It’s called Chizki’s Minyan,” one of the attendees explains with a smile. “There are very few public outdoor minyanim anymore due to coronavirus restrictions. Only this minyan remains, because of Chizki.”

Chizki sits in a motorized wheelchair, which he operates very well. Until enough men come to the minyan, he drives the chair back and forth in the street, carefully navigating the ramps and enjoying every moment. His father, of course, stands nearby, watching him. Chizki needs close adult supervision whenever he leaves the house. Now, with the coronavirus and his heightened risk of infection, the wheelchair has been covered with thick, clear plastic on all sides, creating a capsule. Inside the capsule is a small fan to circulate air and disperse the heat. Attached to the rear of the chair is a medical kit, just in case.

Condensation from his breathing makes it difficult for Chizki to see outside, so his father pulls a tissue out of his pocket and wipes the plastic, and Chizki continues to zip about.

A Witness to Presidential Corruption // John Dean, Who Brought Down President Nixon In an Explosive Interview

Rome Wasn’t Built in a Day // A kosher meat kitchen...