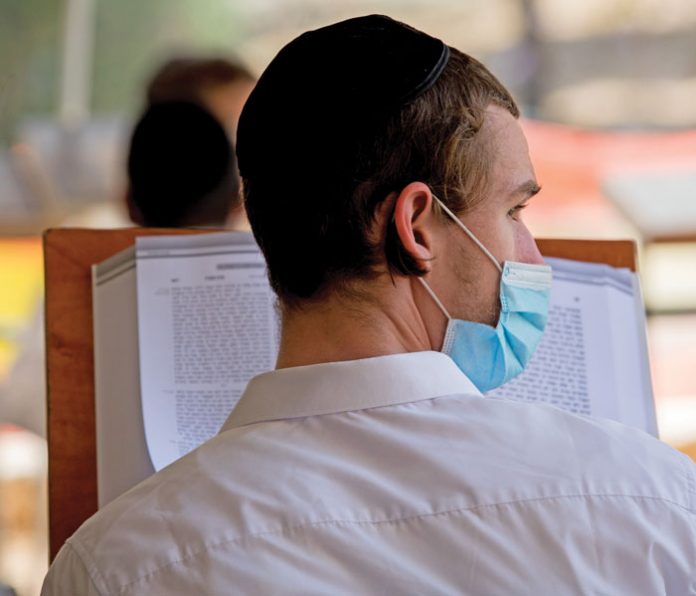 The yeshivos in Eretz Yisrael had finally begun opening very slowly due to the coronavirus. This past week, the last of the yeshivos reopened and the kol Torah is once again being heard within the batei midrash. But unfortunately, the rising numbers of infected over the last two weeks have the experts warning that we’re “finding ourselves at the beginning of a second wave,” and that is cause for grave concern among the hanhalos of the yeshivos. Yeshivos and kollelim where someone tests positive are temporarily closed until everyone can be tested.
The bachurim from outside of Eretz Yisrael, however, have been impacted more than those living in Eretz Yisrael. After much effort and countless conversations between Interior Minister Rabbi Aryeh Deri and the roshei yeshivah, an agreement was reached to allow those talmidim to begin returning to their yeshivos. The yeshivos prepared quarantine areas on their campuses for them, and some talmidim even purchased airline tickets. However, very few of them managed to return to Eretz Yisrael before Deri changed his decision and instructed that the borders be shut down again: “Due to the worsening of the coronavirus situation in Israel, at this point I am forced, with great pain, to cease the entry of the talmidei hayeshivos who are bachurim.”
The number of positive tests, which has been rising daily in a constant curve over the past two weeks, from the single digits to hundreds, is what forced Deri into this decision. For the moment, even the Interior Ministry can’t answer when the yeshivah bachurim will be allowed to return. All they can say is that it depends on the number of infected; when the curve is flattened again they will be able to re-implement the existing agreement.
When the virus first broke out and the yeshivos were all closed, the talmidim who live outside Eretz Yisrael returned home on the last flights out before the aviation borders were shut down. The borders weren’t shut hermetically, however, and anyone holding Israeli identification papers was able to enter the country. The state even operated flights to bring stranded citizens home from distant locations. But in the chareidi community there are many who don’t have Israeli identification papers, which meant that they were stranded far from their families in Israel. The most striking example is that of avreichim from Mir and Brisk who have been living in Eretz Yisrael without citizenship either because they plan on eventually leaving the country or because they haven’t yet fully committed to living there for the rest of their lives. In Yerushalayim alone there are thousands of avreichim in that position. The situation is similar for chasidishe avreichim who wanted to live near their Rebbes during the first years of their marriage. For various reasons those avreichim who left the country before the coronavirus outbreak haven’t been allowed to return.
Yitzchak Philip, who is the chief of staff for MK Rabbi Yisrael Eichler, has been assisting hundreds of people who are stranded outside of Eretz Yisrael. He tells Ami that before Yom Tov they dealt with hundreds of such cases. “The official reason the Health Ministry gave for not letting them in was that ‘the yeshivos and kollelim are closed anyway, so there’s no reason for you to return.’ That answer might make sense on paper, but we’re talking about people who were stranded outside of the country, far from their family members: families who didn’t have where to go for Pesach, avreichim who were stuck outside of the country, and many more examples. With the summer zman starting and the yeshivos and kollelim starting to go back to normal, we resubmitted many of these requests.” According to Philip, it was the Health Ministry that was uncooperative, while Minister Deri, who along with the National Security Council is responsible for the borders, worked hard to find solutions.

Will England Ban Shechitah post-Brexit? // An interview with British shechitah...