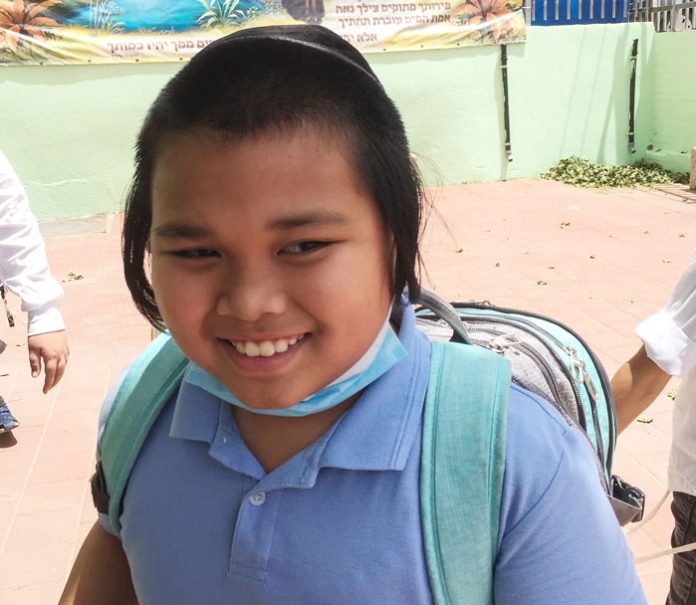 In March 1, 2020, ten-year-old Moshe Dovid and his mother were scheduled to be deported from Israel to the Philippines.
“All my friends are here. I was born here and lived here all my life. I don’t even know the language they speak in the Philippines. My yeshivah—it’s kef!” Moshe Dovid tells me when I meet him, using the slang word for “fun.”
How could it be that a chareidi mother and son who underwent giyur in one of the strictest batei din in Israel and who have been living in a religious community for a decade aren’t recognized as Jews under the Chok Hashevut (Law of Return), and are being told to leave the country?
I met with Moshe Dovid and his plucky mother Chaya Yael shortly before Shavuos, the Yom Tov on which we read Sefer Rus, and the subject of geirus is especially timely. Also at the meeting were a group of people who are making a determined effort to help Chaya Yael and her son remain in Eretz Yisrael, where they are beloved members of their community in Tel Aviv.

Chaya Yael came to Israel in 1996 to work as a caregiver. At the time she was known as Josephine Almeda, a 24-year-old Catholic from the Philippines. The agency she worked for assigned her to a religious family, and she was immediately drawn to Yiddishkeit. Everything she was exposed to—Shabbos, Yom Tov, kashrus, the respect that was paid to parents and elders, the relationship Jews have with Hashem, the davening—brought her to the realization that this was the life she wanted to lead.
Chaya Yael worked for a number of dati families as a nanny and started to study Torah under the tutelage of several rebbetzins, among them the late Rabbanit Chaya Engel, a”h. When it came time for Josephine to choose a Jewish name, she picked Chaya to honor the memory of her mentor.
Now, almost 25 years after her arrival, the threat of being sent back to the Philippines hangs over her head.

In Elul of 5770 (2010) she gave birth to a baby boy. The boy’s father had gone back to the Philippines, and Chaya Yael had to cope on her own. By then she was fully observant of halachah, except for the requirement before formal conversion that she not keep Shabbos completely. A half year later, in Shvat 5771 (2011), she went to the beis din of Rav Nissim Karelitz in Bnei Brak, one of the most highly respected batei din in Eretz Yisrael, underwent geirus. The bris and tevilah of her child took place a month later, with Rav Yisrael Dov Weisel, one of the dayanim on Rav Karelitz’s beis din, as sandek. The baby was named Moshe Dovid.
Although the beis din tzedek of Rav Karelitz is considered to be more stringent than the batei din of the Rabbanut, the Chief Rabbinate of Israel, it is not formally under their jurisdiction, and there are therefore problems when interfacing with legal structures such as the Ministry of the Interior—which is the body responsible for granting citizenship, identity cards and passports.
Chaya Yael looks no different from the average heimishe matron. She ekes out a living as a house-cleaner. She and Moshe Dovid live in the Tikva Quarter of southeastern Tel Aviv, a working-class neighborhood that suffers from neglect and poor public services. Interestingly, it is also home to an active group of geirei tzedek who are from the Philippines and are meticulously observant. Chaya Yael has amassed a large library of sifrei kodesh, many of its volumes in English, which she lends to others. From the time Moshe Dovid was a toddler, she has sent him to chareidi mosdos.
When asked which aspects of observance were more difficult to take upon herself in the process of conversion, Chaya Yael didn’t understand the question. “Difficult? I loved everything.”

“Well, what about preparing for Pesach? Wasn’t that a challenge?” I probed.
Chaya Yael protested, “Pesach? I love cleaning. After all, that’s what I do for a living. And Pesach is my favorite Yom Tov.” Nonetheless, after a few moments of rumination she did admit that there was one difficult aspect of converting: the distance it put—geographically, socially and spiritually—from her relatives.
We visited Moshe Dovid in his cheder just as the talmidim were going home for the day. The amiable principal, Rabbi Eran Levy, greeted us at the entrance next to a colorful mural welcoming one and all to Talmud Torah Kehillat Yaakov-Abir Yaakov, which is under the auspices of Chinuch Atzmai of Agudas Yisrael. It was during the first few tentative days after the schools reopened following the coronavirus break of two months, and everyone was still wearing masks. Rabbi Levy said a cheerful good-bye to each child and handed him a form to be signed by a parent and returned, noting the child’s temperature and whether or not he is free of any signs of illness. All pupils in Israeli schools are required to bring in these signed forms every morning.
“Rabbi Levy says that for decades he had been part of the religious community established in Tel Aviv by Rav Mordechai Auerbach, one of the sons of Rav Shlomo Zalman Auerbach, zt”l. Rav Mordechai was one of the first “pioneers” to live in the religiously-challenged city of Tel Aviv, as is Rabbi Levy himself; he is the menahel of a Talmud Torah in one of the most depressed-shading-over-to-dangerous areas of the city. (I was actually a bit apprehensive about visiting the school, but my fears turned out to be unfounded, and I was pleasantly surprised to find a cheerfully-decorated yeshivah bursting with boisterous children.)