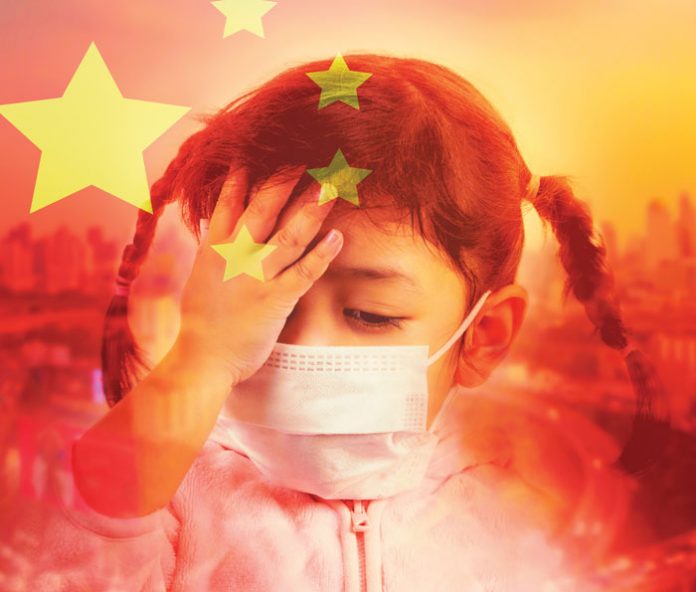 China’s Great Wall of Lies about COVID-19 is falling down. Soft-spoken reassurances that were spoonfed to the Western press only a month ago must now be regarded as toxic deceptions. Modern medicine is a bitter pill for Chinese politicians to swallow. But hard science is finally yielding hard facts, and the news from Wuhan is bad and getting worse.
Let’s take the worst first. The Chinese are now admitting that their 14-day quarantine period was much too short to keep the coronavirus from spreading around the world. Chinese scientists have confirmed cases where the first symptoms of the Wuhan virus, scientifically dubbed COVID-19, did not develop until 24 to 27 days after exposure. We may soon uncover cases where it took a month or more before the sickness began to manifest. One man from Hubei has just been confirmed as having the virus an astounding 38 days after he was exposed. He displayed no symptoms all that time.
As the amount of time from first exposure to first symptoms keeps expanding, it looks as if a five- or six-week quarantine may still not be enough to stop the spread of COVID-19. The 14-day quarantine period is as dead as its victims.
The American government has been letting these potentially sick people from Wuhan back into the country without ascertaining whether they could still be carriers. It does not matter whether these unfortunates spent the previous 14 days in quarantine and have passed every lab test; they may still be carriers of this deadly new disease.
With a five- to six-week delay between exposure and illness, COVID-19 is an incredibly stealthy virus that is slowly spreading around the world. Scientists use lab tests to detect and contain viruses, but lab test kits are expensive and in short supply, and it usually takes one to two days to get results. We do not use lab tests at our borders. Pity.
Our national strategy to fight viruses has been designed to control only diseases that are easily spotted, not to keep out stealthy viruses like the Wuhan virus. The current screening system at our borders is designed to detect evident symptoms, such as fever or coughing. This is useless. In the meantime, returning American citizens who are carrying COVID-19 can breeze through the border checkpoints into the USA because they may not show any outward symptoms at all for the first 38 days after exposure. Of course, they may be infecting many other Americans before they realize how sick they really are.
Even worse, if they traveled by air with the flu, they could have spread the Wuhan virus to every person across the aisle on the plane. Since the air on these planes is recirculated, everyone on board would eventually get a whiff of COVID-19. These airline passengers could also bring the disease back to their own communities.