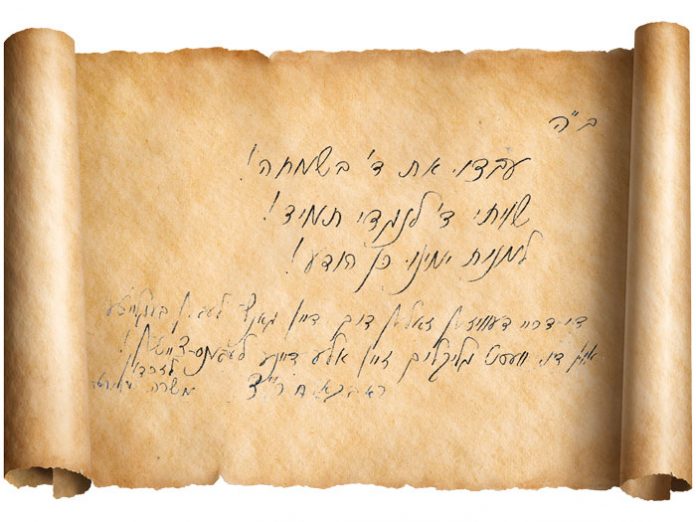 After we published Rebbetzin Leah Kolodetsky’s plea to ease the amount of homework our girls are being assigned, we were deluged with letters. It’s obvious that the tremendous pressure being felt by many of our daughters is a subject that elicits much emotion. One letter writer, a teacher for many years, described how she sees firsthand what the Rebbetzin was talking about: a general malaise and depression. She then brought to my attention the existence of a new school, Beis Chinuch Gevoah, which opened this past September with a single ninth-grade class. She also said that its founder, Mrs. Bruchy Retek, the former English principal of Gan Yisroel in Boro Park and current elementary principal of Bnos Derech Yisroel in Monsey who is originally from England and has ten children, bli ayin hara, is revolutionizing the way we educate our girls. I was intrigued and wanted to hear more.
The following is my conversation with Mrs. Retek.

We begin with Bruchy telling me about the impetus that led to her starting a new school, or “my moment of insanity,” as she refers to it.

“Everything happened because of eight girls from good families who were looking for something more than their schools were giving them. With them we opened our brand-new school in the basement of our shul. I told the girls, ‘You’re just like Sara Schenirer’s first class! The first Bais Yaakov also started out with eight students!’”

To understand what formed Bruchy’s vision, she tells me about her background, beginning with her grandfather.

“My grandfather, Reb Shaya Retek, worked for the Agudah in Eretz Yisrael right after the war. Sarah Schenirer’s surviving talmidos gave him an old Bais Yaakov journal and asked him to please reprint it for them, which he did. As a gift, they gave him the original. When I was growing up, my mother would sit with us on Friday nights and we would look through it. It made you feel like you were touching history. On the one hand, it was very sad. So many of her students had perished in the Holocaust, but her writings were so uplifting. She addressed her students as ‘tayere Yiddishe techter.’ There was so much hartz and understanding that you could feel her warmth coming through.

“With the establishment of this new school, I feel like I am recreating Sarah Schenirer’s original intent by going back to the basics, instilling a love for Yiddishkeit in our girls through warmth, understanding and positivity. Our daughters are our future, the mothers of the next generation of klal Yisrael.
I’m fortunate to have had very good role models as a child. My mother had a seminary in London, and she would accept any girl who knocked on her door. A lot of people criticized her for that, but she never regretted her policy. We had a girl from Eretz Yisrael who was from a very dysfunctional home living in our house. Everyone advised my mother not to accept her into her seminary, but she interviewed her and her heart melted. This girl told us later that until she came to live with us, she had no idea what a normal home looked like. Baruch Hashem, she got married and is now the mother of seven children, bli ayin hara, and has an amazing home of her own. Those are the kinds of things I saw growing up. Girls would come to talk to my mother—this was before people spoke about understanding teenagers—and she would really listen to them and validate their feelings. Once they felt validated they were fine.

How long have you been in chinuch?
Twenty-seven years—with a two-year break when I lived in Eretz Yisrael as a newlywed.

Before opening your school, did you say, “I’m going to take my years in chinuch and put together a plan,” or did you also study different methodologies?
I’ve spent the past 27 years studying voraciously, taking knowledge from wherever I could find it. But I can thank Rabbi and Aron and Shternie Ginsberg from Gan Yisroel in Boro Park for making me who I am today. These are people who know what chinuch is all about. They have the Chabad understanding that every child we come across is someone we need to be mekarev, and to connect to his or her neshamah. Rabbi Ginsberg would constantly tell the teachers, “You’re maaminim, right? You believe that Hashem doesn’t make mistakes. So the fact that you’re standing in front of this particular class this year means that you need to touch the lives of every single one of those children, because otherwise, why would Hashem give you that class?”

A Close Call: I Almost Missed Repairing My Relationship With My...