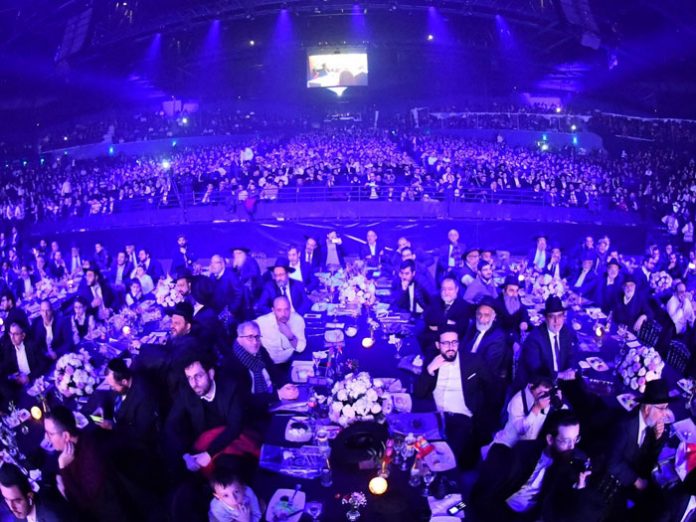 From the moment I entered the Heythrop Park Resort Hotel in Oxfordshire, England, on Friday afternoon, I immediately sensed that this Shabbos was going to be more exalted than anything I had ever experienced.

I had the privilege to join the Dirshu World Siyum celebrations taking place in England and France, from Friday, Parshas Vayechi, January 10, through Sunday, January 12, on the occasion of the conclusion of the 13th cycle of Daf Yomi. The siyumim began on Chanukah at the Binyanei Ha’Uma in Yerushalayim and will continue over the next few weeks in North America, South Africa and Eastern Europe.

The siyum in England took place at Heythrop Park Resort in Oxfordshire, England, which is an 18th-century manor house converted into a four-star golf resort, with lush scenery and rolling green fields stretching for acres. At this location, nestled in the hills of the English countryside, 70 miles outside London, and only a short distance from Oxford University (one of the world’s most exclusive schools), Dirshu hosted graduates of its own system of education—one that is unique with its inclusive policy, welcoming anyone to join them in their mission to advance kevod haTorah throughout the world.

Spending Shabbos in the presence of the elite of Europe was an unforgettable experience. Rabbi Binyamin Eckstein, Director of Dirshu Europe, along with his son-in-law Reb Chesky Shuvaks, recruited the finest darshanim and chazzanim to ensure an uplifting Shabbos for everyone, along with an incredible team of organizers and catering staff to guarantee that all who came left completely satisfied. There was an abundance of delicious food, uplifting tefillos, and a dazzling array of maggidei shiur and speakers from around the world, including Rav Asher Druk of Yerushalayim.

As one of the few Americans joining for Shabbos, I initially felt a bit out of place, but as we davened, learned, ate, sang and danced together, I temporarily lost my American identity and became, according to the theme of that Shabbos, “a Dirshu Yid.”

As I sat among the European guests I found common ground. I became part of the Dirshu family. As Rav Asher Druk, who electrified the crowd with his three drashos over Shabbos, remarked, “The most beautiful part of Shabbos was the yachad shivtei Yisrael!”

A diamond dealer from London turned out to be my father’s chavrusa in Ponevezh 40 years ago. I shared divrei Torah with my first cousin’s chavrusa from Brisk, who is a Daf Yomi B’Halachah maggid shiur in Manchester. I schmoozed with an elderly Yid who reminisced about his spending an entire day at the side of my great-grandfather, Rav Yaakov, zt”l, on the shores of Miami in the Sovereign Hotel many decades ago. Later, I met a rav in Paris whose every Shabbos is enhanced by the French translation of my weekly email dvar Torah, transcribed from the notes of my grandfather Rav Binyamin, zt”l.

What Exactly Is a “Dirshu Yid”?
A “Dirshu Yid” is not defined by someone who takes monthly tests. A Dirshu Yid is someone whose priority is Torah. He lives and breathes the daf, the Mishnah Berurah, or even Chumash and Rashi. He goes to work but his priority is Torah. He knows that he is on this world for a purpose, and that purpose is to amass as much Torah knowledge as possible. “Dirshu Hashem” (Tehillim 105:4) — “Seek out Hashem and His strength.” In the words of the nasi of Dirshu, Rav Dovid Hofstedter, “A Dirshu Yid is someone who is tovel in the mikveh taharah of the Torah 24 hours a day. A Dirshu Yid is someone who is so attached to Torah that no outside influence can creep in.” A Dirshu Yid’s conversations focus on his strategy for chazarah, or clarifying the minhag hamakom with respect to the words of the Mishnah Berurah. His spare time is spent reviewing last month’s daf, or finishing a Tosafos that he started earlier in the day. A Dirshu Yid is someone who lives in Hashem’s presence.
I had the honor of meeting many maggidei shiur from across Europe and listening to them speak. After the Friday night Oneg Shabbos, which featured a sh’eilos uteshuvos session with Rav Chaim Kraus, dayan on the Gateshead Beis Din, I had a moment to speak with Rav Shlomo Orlevsky, a Boro Park native who now gives the largest Daf Yomi shiur in Manchester:

Filling Stadiums with Torah // Rav Shlomo Rozenstein on the recent...