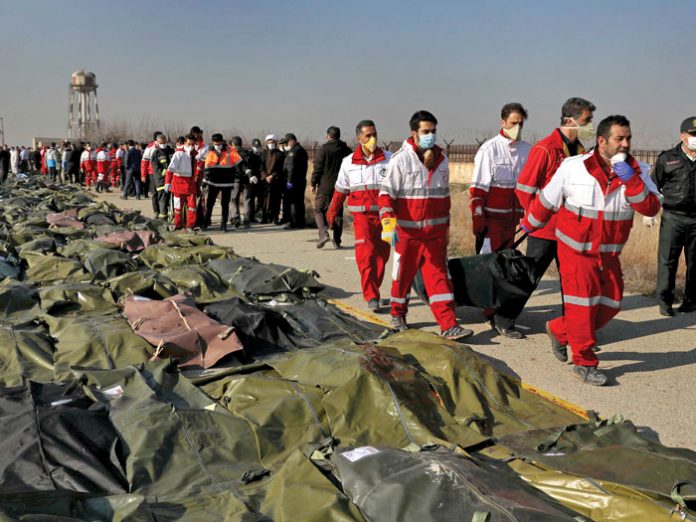 In the intelligence community, an “anomaly” is something out of the ordinary pattern that needs a further look. In the case of the recent crash of the Ukrainian commercial flight in Iran, there are a lot of anomalies in the timeline that need to be explained.

There are several videotapes of the crash taken at various times by hand-held video cameras. But there is only one crucial video tape of the entire flight path taken from a building security camera several miles away from the airport. An Iranian citizen suspected of passing this one videotape to the West has been arrested and imprisoned for “breaching national security.” The arrest occurred on January 14, several days after the government admitted shooting the plane down by accident. What is so sensitive about this tape anyway?

It is the only tape that shows the entire timeline from takeoff to crash. Ukrainian Flight 752 was originally scheduled for departure at 5:15 a.m., but the cautious Ukrainian pilot checked the cargo manifest and discovered the plane had been overloaded past its certified weight capacity. This is a frequent occurrence in third-world countries where passengers bribe the check-in agents to overlook their grossly overweight suitcases, which are often packed with commercial items for resale abroad.

The pilot of Flight 752 was wise to this trick and ordered several tons of luggage to be off-loaded and forwarded on the next flight. As a result, the plane did not depart from the terminal for another 57 minutes. We know this because the independent Swedish group “Flightradar24” uses satellites and an international network of volunteers to record all aircraft transponder signals instantly in order to digitally track the exact location of all commercial aircraft in the world.

Flightradar24’s tracking map confirms that Ukrainian Flight 752 finally left its gate after nearly an hour’s delay. It pulled away from the Tehran terminal just before 6:12 a.m. It took off from runway 29R at exactly 47 seconds past 6:12 a.m. At 6:14:45, Flight 752 was struck by a missile, less than two minutes after it left the runway, and the ABS transponder, a radio set located in the nose of the aircraft, went silent.

This is not public yet, but the first missile exploded toward the front of the aircraft, immediately killing the entire flight crew and shredding the transponders with shrapnel. This is why there were no further radio communications.

The Tor SA-15 is a Russian-made missile designed to shoot down cruise missiles as well as airplanes, like the Israeli Iron Dome system. The warhead is in the middle of the interceptor missile, not the nose. The Israeli missile works 100 percent of the time in a nose-on attack, but the fuse detonates a little too late on a sideways approach. The Russians solved that problem with the SA-15.

The nose of the SA-15 has four fins so it can steer right up to the target. When it gets close, the radar proximity fuse tells the warhead to detonate. The missile is going so fast that by the time the fuse signal says detonate, the warhead back in the middle is in perfect position to create as much damage as possible. It was the shrapnel from the warhead in the middle that ripped Flight 724 apart; the distinctive steering nose from the SA-15 landed unharmed with the other debris from the attack.

The second IRGC missile struck near the right rear of the aircraft some 30 seconds after the first one. The shrapnel from this second SA-15 strike damaged one of the black boxes. It also sent shrapnel through the right (starboard) surface of the tail, as shown in a close-up photograph of the tail after the crash.

Obama Did it! Not. // Obama accused of collusion by an...