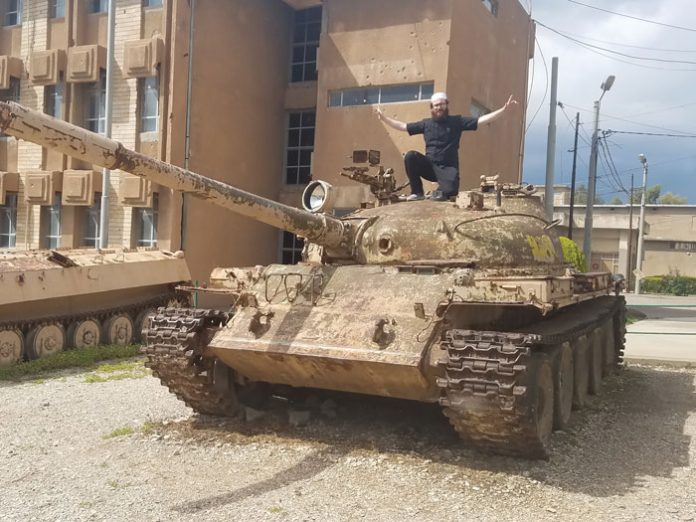 RECAP: As the group’s journey through Iraqi Kurdistan unfolds, evidence mounts that Jerry is a spy. As the late hours of Thursday night morph into the early hours of Friday morning, Turx makes a decision to confront Jerry and expel him from the group. This task is not simple. But then again, nothing that has taken place this week has been simple. This segment takes us through the final part of the subplot spotlighting Jerry the spy, after which the narrative shifts back to the rest of the story, which involves betrayal at a 2,000-year-old shul, an encounter with human shields, and an entanglement between two rival mafia-esque clans, all while the group attempts to cover a fraudulent election. Yeah, it’s been a busy week.

Spy and I, Phase Five: The Shady Bartender
With suspicions about Jerry* both exposed and acknowledged, I know I will no longer be able to justify letting him anywhere near our group. But I feel I must run this by someone, and the way the trip has evolved, there is only one person whom I feel comfortable enough confiding in.

I approach fellow trip comrade Kassy Dillon, founder of the LoneConservative blog, and reveal my exchange with Abdul. We agree that the only responsible thing to do would be to tell everyone what we know. This is easier said than done, because by this point our group has splintered into a few small clusters of conniving paranoiacs, and rightfully so.

A few hours pass, and I manage to bring pretty much everyone (with the exception of Mac,* the trip’s organizer, and maybe one or two others) up to speed, stressing that these are simply Abdul’s suspicions and that we know nothing with certainty. This big revelation generates a potent collective surge of adrenaline, which counterintuitively helps diffuse most of the anxiety that’s been building up for quite some time. Most members of the group find this disclosure quite amusing, given all the craziness we have been put through up to this point.

By now everyone, including Mac’s business partner Brian,* have agreed to rally behind Ryan, our American head of security, who has reluctantly agreed to take charge, assuming certain conditions of his are met. Conditions, as it turns out, are nowhere close to being met. But getting back under Mac’s banner isn’t crossing anybody’s mind either.

We still have two and a half days left to our trip, and most of our to-do lists remain unfulfilled. And while everyone agrees to ditch whatever has been left of Mac’s schedule, no two individuals can agree on what our next few moves ought to be. As for myself, I had already worked out my own private schedule with Jerry for the following day, but obviously those plans are now off the table and running for the hills.
There is plenty I still expect to get done while in Iraq. Which of these items will I manage to squeeze into the short time that remains? This is actually the least of my concerns. Besides Jerry being out of the picture, I’m also done with Adbul, Mo and their band of warriors. In the few hours that remain between now and sunrise, I will have to satisfy my vehicular, security and lodging needs. There are plenty of scam artists ready to bilk a lonesome American, and I am no longer willing to shell out additional monies for what was supposed to be an all-expense-paid trip.
The problems abound, but the good news is that these problems aren’t going anywhere and can be dealt with in due time. Meanwhile, there are much bigger problems to deal with at the moment.

None of us, to my knowledge, has gotten more than two hours of sleep a night all week. Tonight is quickly shaping up to be another one of those nights. Midnight finds most of the group at a hookah bar two blocks away from the hotel. We are pretty much split into two groups, one on the ground floor with Mac and the other on the second floor with Ryan. Adbul, Mo and their cronies float between the two groups, dollar signs flashing in their eyes. The two groups are in constant flux, with individuals leaving one faction to sit down with the other. Messages are relayed, negotiations are started; the clock runs late, tensions run high.

By this point, Mo has given his word that no longer will he have Mac hauled off to one of the PUK-run prisons (most of the group has actually been supportive of, or at least indifferent to, Mac being taken into some kind of custody), but absurdly enough, Mac still believes he is in control. A few more hours of glib talk, mind games and persuasion, and the group will be in his grasp once again, he seems to have figured. So long as he has Brian by his side, the rest of the fragmented group will certainly coalesce around him. I watch for an hour as Brian keeps dropping all kinds of hints that he had agreed to join the mutiny as early as seven hours ago. But Mac dismisses them all.

I now introduce the barman, a character none of us has encountered before (or since, to be honest). It is through his actions, as far as I remember, that matters are escorted to the point of no return.

Will the Terror Victims Law Block US Aid to the Palestinian Authority? // Biden changes course, but he may be stopped