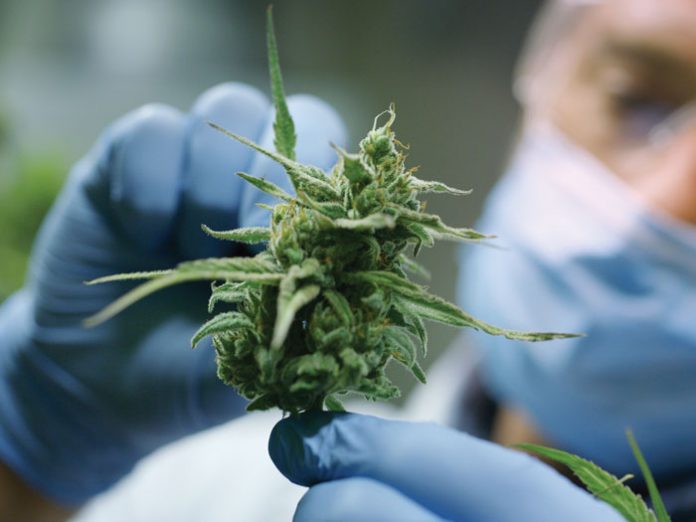 It’s late evening in a well-known kosher restaurant on Pico Boulevard in Los Angeles. Most of those seated at the tables have already finished their meals, as the restaurant is about to close. A frum couple walks into the restaurant and spots me sitting at an empty table. They quickly sit down, and we get to talking. Alex and Shifra Klein are not your typical Chabad couple, nor are they typical parents or business owners. They run a company called Mitzva Wellness, which produces kosher hemp products under the supervision of the OU. They make hemp oils and balms, and they have just released their brand-new strawberry-flavored gummies. All of their products are third-party lab tested and have zero psychoactive effects, not to mention that they are all available for shipping to all 50 states and Canada, with no prescriptions needed. So, how does a nice Jewish couple get into the medical cannabis business? And why would the world’s largest and most trusted kashrus organization give them a stamp of approval? You’re about to find out.

“It all started,” begins Shifra, “with us trying to find the proper medication for our child. In 2007, at the age of two, our son Yaakov was diagnosed as severely autistic. He was so severe that the regional center that diagnosed him made us sign paperwork saying that they offered to take him and award him to the state because he would be almost impossible to take care of at this point. Obviously, we declined that offer. He has regressive autism, so he did not have autistic behavior until he was about 13 months old. He had his four words, was fully functioning and met all of his milestones, but then we started to see the decline. By 18 months he had no language anymore. By two years, he lost all muscle tone. He couldn’t hold a bottle. His mouth hung open and he drooled. He had severe apraxia [inability to do common tasks].”

“Even today, it’s difficult for us to talk about it. Yaakov would run back and forth around the living room for hours on end,” says Alex.

“Banging his head until he was bleeding,” Shifra adds. “It was just impossible. We took him to UCLA and Cedars. We took him to doctor after doctor. We did intensive therapies, like chelation therapy and hyperbaric chamber therapy—anything we could think of. Every extreme diet. Everything. He ended up on about 13 medications by the time he was eight years old. And there are no medications for autism. I started doing online research to see what other people were doing because he wasn’t getting any better; he had plateaued and was not making any progress. We discovered a group of mothers who were healing their kids with cannabis, and we started learning more about it. We found that some doctors were also finding breakthroughs through cannabis, and we were willing to try anything at that point.”

“Was it legal then?” I ask. Cannabis laws vary by state.

“It was still a gray area then,” Shifra says. (Cannabis was legal in the state of California on a state level for medicinal use only, although availability restrictions were quite lax. Anyone claiming to suffer from anything could just walk into a doctor’s office, get a prescription and then head to the nearest dispensary to buy the product. However, while cannabis is now legal even for recreational use in California, it is still illegal on a federal level, which means that every now and then the federal government can come through the state and confiscate all of the cannabis from the dispensaries.) “But we needed a kosher product, and we couldn’t find anything available. So, we started learning how to make it ourselves. At first, we tried to make it in a crock-pot.”

“Just think of cannabis cholent,” Alex jokes. “We put the cannabis in the pot and let it cook overnight.”

“Yeah, right?” Shifra continues. “We were trying to figure this out, and it didn’t work the first few times; it took a few tries. I was also very nervous about giving our son anything.”

“I can definitely understand that,” I say. “What was the first product you made for him?”

“It was a cookie. It was a very expensive process, because I wasn’t going to give him anything untested. So we would buy the cannabis—Alex would walk into dispensaries just the way he’s dressed now, although he’d leave his hat and jacket at home.”

“I’d say, ‘Give me your best CBD.’ (The cannabis plant is made up of CBD and THC. CBD is the non-psychoactive portion of the plant.) ‘Give me a gram of this, give me a gram of that.’ We would spend hundreds of dollars. We were buying expensive ingredients. That stuff is not cheap,” explains Alex.

“It’s a whole process,” he recalls. “In the beginning, we found recipes online. You have to heat it at a certain temperature. It’s a stew. You’re basically making stew.”

Success Before My Eyes // But some things should remain private

Our Special Gift // The Brachah of My Daughter Batsheva Temima,...