Q: What was it like growing up in a home with a father who was completely dedicated to the Rebbe and to the klal?
A: We grew up—I don’t want to say different from anyone else—but our way of thinking developed based on what we saw. My father would go to the Rebbe very often, of course, but he would also try not to bother the Rebbe as much as possible. Since there were a few secretaries, whenever it was possible for him to do something through someone else, he would do so. I asked him once “Why don’t you go in?” He said, “Why should I bother the Rebbe if I can do it through someone else?” But when he had no choice he would go in, and I always knew a few hours beforehand that he would soon be going in to the Rebbe without him even telling me, because he was in a different world then. The pachad that he always had before going in to the Rebbe was unreal, and it was very special for me to see that. I knew I couldn’t talk to him at that point, because his mind was somewhere else. Someone once said to him that he probably gets used to going in to the Rebbe after doing so so many times, but he said, “By the Rebbe the closer you get, the further you realize you are.” He lived it, and he felt it.

Q: It’s interesting that he never lost that pachad.
A: On the contrary, the pachad became only stronger as time went on. He was also a ben bayis by the Frierdiker Rebbe—the Rebbe Rayatz—as a bachur. He used to take care of things in the home of the Rebbe Rayatz. My grandfather, Rav Eliyahu Simpson, who was a rav in Boro Park, was a mazkir of the Rebbe Rayatz. So my father grew up in a home that was completely dedicated to the Rebbe and completely under that feeling. My grandfather was also a very special person; he was very secretive, and he never repeated anything. When working closely with the Rebbe there are things that can’t be spoken about, and he was privy to many private things. In the later years after the Rebbe Rayatz suffered a stroke there were very few people who understood his speech, because it was very hard for him to speak. My grandfather would go in together with people who went for yechidus, and he would repeat to them what the Rebbe Rayatz would say. Of course when he came home his children would ask him if he heard anything interesting, but he would say that he didn’t remember anything. “Nothing happened.” I heard from my father that he was home when someone called his father to ask if he could remind him of one prat that he had forgotten from his own yechidus the day before. My grandfather said, “I don’t remember anything. I wipe everything from my memory as soon as I walk out of the room.”

Q: How did your father become a mazkir?
A: When the Rebbe became Rebbe in 1951 he called in my father and said, “Since your father is a baal sod, I’m sure the same will apply to you, and I want you to start working for me.” He started as a 21-year-old bachur; he got married in 1954.

Q: What was his role in the mazkirus?
A: When he started he was the only one, so he did everything that had to be done—letters, driving the Rebbe…whatever it took. As time went on and the work became harder, he had to start pushing away certain things and focus more on the letters, which ended up being his main job. When he started working in 1951 he worked in the same room as the Rebbe, because at that point the Rebbe didn’t want any letters to leave the room. He would sit at his desk, and the Rebbe would sit at his desk, and the Rebbe would give him things to take care of. That went on for a couple of years until the work grew too big for the room to handle, so he moved over to the next room, which was called mazkirus—the secretariat room. 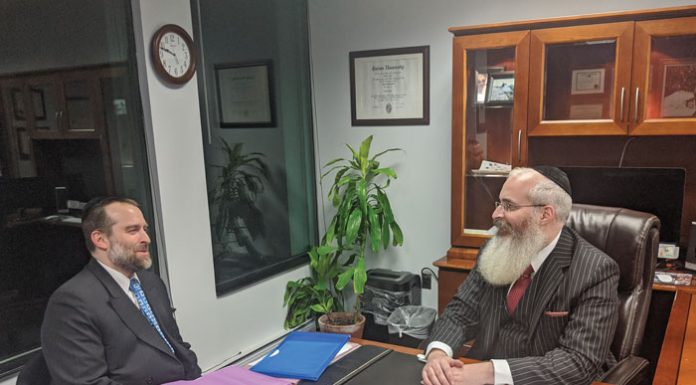 Orthodox Doctors Vs. Assisted Suicide // Laws permitting assisted suicide in the US and Canada threaten both patients and frum healthcare workers....

Shedding Some Light on the White House Chanukah Parties //...

An Angel Among Us // A Tribute to Rabbi Mordechai Leib...