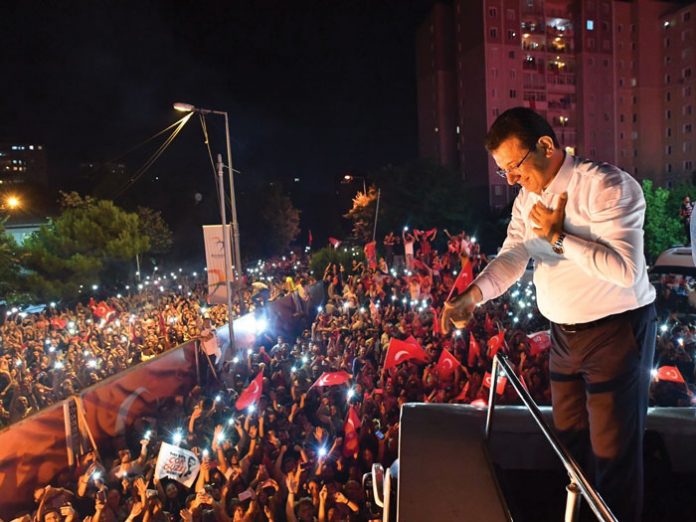 Sometimes it is difficult to recognize that a seminal event in history has taken place. I predict the recent mayoral election in Istanbul will stand as the high-water mark of the Islamist insurgency. From this point, it will only be downhill for the Islamist politicians who attempt to take over elected governments in the Middle East.

Now, some of you may wonder why I’m making such a big deal over one little municipal election. Hey, who cares if President Recep Erdogan’s close buddy lost re-election as mayor of Istanbul? Erdogan certainly does. Years ago, he had publicly predicted, “If we lose Istanbul, we lose Turkey.”

By “we,” Erdogan obviously wasn’t talking about the Turkish people. He was talking about the Islamists of the APK who helped him seize power in Turkey through the ballot box. Now the AKP has lost a shoo-in of an election in their own backyard.

It was never supposed to happen. Erdogan sees the debacle of the Istanbul elections as the handwriting on the wall for him and his regime. I think he is right, and so does most of the Arab press.

Let me give you an example of how desperate Erdogan was to win Istanbul. The original election was scheduled for March 31, 2019. It was supposed to be a walk-in for the AKP, but they lost by 13,000 votes, a thin margin. There was a low turnout in some of the AKP’s best neighborhoods, so they asked Erdogan for a do-over. They swore that this time all the AKP hacks would turn out to vote. So Erdogan overturned the election.

“Yielding to pressure from Erdogan, the Supreme Electoral Council…canceled the original March 31 vote, which Ekrem Imamoglu won by a margin of 13,000 votes. Erdogan argued at the time that “an election victory by such a tiny margin will not set the people’s minds at rest” and that “no one should put on airs as a winner with a lead of just 13,000 to 14,000 votes.”

So how much of a margin does someone need before his victory puts Erdogan’s expectations to rest? The people of Istanbul responded to this do-over election outrage with an 80 percent turnout at the polls on June 23, 2019. Imamoglu won again, but this time it was a landslide; he defeated the APK by 806,000 votes. Even the AKP neighborhoods voted for Imamoglu out of disgust with their own party. Instead of doing better with a bigger turnout, the APK candidate lost 12 of the 23 districts it had previously won. Imamoglu came in first in 28 of the 39 districts.

Now, Erdogan shares some direct personal responsibility for his party’s defeat. Three days before the do-over election, he went on national TV to say that even if Imamoglu won again, there might have to be a third election in which Imamoglu would be disqualified because he once called a visiting politician a dog.

The alleged dog turned out to be one of Erdogan’s cronies, the governor of the Black Sea province of Ordu. Imamoglu had barred him from using the VIP section of the local airport where heated words were exchanged after a visit on June 6. The governor went whining to Erdogan about being called a dog.

A furious Erdogan then shot himself in the foot with a nationally televised threat to disqualify the leading candidate on the eve of the do-over election.

“In a TV program three days before the June 23 vote, Erdogan suggested that Imamoglu could be stripped of his post by judicial means even after his election. ‘The judiciary is the one to decide the consequences of calling a governor of this country a dog. The consequences of such insults…are, in fact, obvious in the laws,’ Erdogan said, referring to jail terms that could result in Imamoglu’s removal from office.”

The threat backfired, causing a huge increase in turnout. Apparently, the voters agreed that the governor really was a dog. When the results showed that Imamoglu had won by double digits, the hitherto intimidated Istanbul press flayed the two-time losers of the AKP. The Arab press joined in the attack, recalling Erdogan’s prediction that if the AKP lost Istanbul, they would lose Turkey:

“So Erdogan did lose Istanbul. And his prophecy about what comes next is not baseless. He could well lose Turkey down the road because any political change in Istanbul reflects on the whole country sooner or later. A megalopolis of 16 million people, Istanbul is a role model emulated by the rest of the country. It is the trendsetter in almost everything, from lifestyles and consumption habits to sports, culture and arts. And any trend that Istanbul does not adopt remains local, failing to spread across the country. This goes for political trends as well. One cannot win over Turkey without winning over Istanbul.”

Turning Up the Heat // Gasbags rail about Stovegate