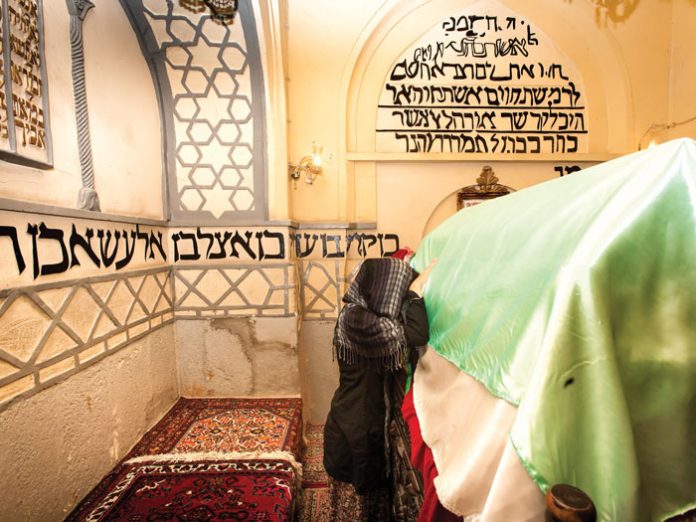 The last time 36-year-old Rebecca Sarno saw her father, it was through the slit of a borrowed burka he’d given her before she was smuggled out of Tehran to safety. Her mother has also since fled Iran, where she faces a death sentence, leaving her husband of 40 years behind. Separated from him by thousands of miles, both mother and daughter await the day they will all be reunited.

This is their story—a story about a country that is unfortunately not lacking for Hamans.

Mixed Memories
In the early 1990s, a family friend of the Sarnos passed away. Nine-year-old Rebecca and her two older brothers stayed in their house in North Tehran while their parents went to pay a shivah call nearby. Suddenly, there was a knock on their front door, and in sauntered the dreaded Iranian secret police.

In a voice dripping with honey, one of the men bent down to the terrified little girl and cooed, “We’ll give you a nice present if you tell us if your father helps Jews escape from Iran.”

They then turned to the boys. “Would you like a shiny new bicycle? Just tell us, does your father have a gun?”

When their parents finally came home, the children escaped to the safety of their bedrooms while an argument ensued downstairs.

This is just one example of the childhood trauma that still haunts Rebecca.

“I have terrible memories of the Iranian authorities,” she tells me from her home in the city of Utrecht, Holland, where she now lives with her mother and her six-year-old son Binyamin, “but I have lovely, happy memories of my home and family. My parents gave us a wonderful life.”

If Rebecca can describe her childhood as wonderful, she must be wearing rose-colored glasses. For much of her youth—until she was seven—her father was absent, exiled by the Iranian government to an abandoned village without running water simply for the crime of being Jewish.

When Rebecca talks about her visits to him and how he had to report to the local police every day, she breaks down in tears. She apologizes for becoming emotional whenever she thinks about her father, who is still stuck in the land of the ayatollahs.

Neither she nor her mother have seen him for a decade. They cannot return to Iran as both women have been accused separately of opposing the Islamic regime by spying on behalf of Israel, so they have sought asylum in Holland, where Rebecca’s brother Alia had preceded them. Rebecca, who arrived in 2008, was granted a visa, but her mother’s arrival two years later coincided with the toughening of immigration policies in the Netherlands. She is currently in a state of legal limbo and lives in daily terror of being deported as an illegal alien by the Dutch authorities.

Unwelcome in Holland
“In 2010,” Rebecca says, “my mother came to Holland to help me because I was expecting my first baby. After she had been here for a few weeks, she and my father were Skyping one day when he cryptically mentioned that she and her ‘collaborators’ were being sought by the Iranian secret police. Her crime? Giving refuge to women who were trapped in dangerous, abusive marriages and couldn’t get a divorce.”

One of these victims had run away from her abusive husband, a radical Muslim who was a member of the secret police. He hunted for her high and low until his detective work led him to Rebecca’s mother’s haven.

Before long the authorities stormed her parents’ office in Tehran, where they found a small sefer Torah and her mother’s Magen David necklace.

“Jews!” they barked. “You must be working for Israel. Tell us where you get your money!”