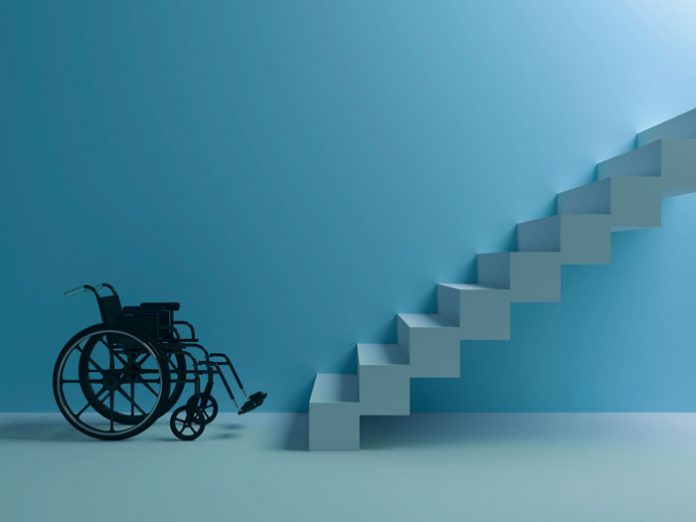 It happened during Reb Sholom Mordechai Rubashkin’s recent visit to London, in the confines of a small office in a girls’ school where he had come to speak. No one but the three people in the room and the four walls know about it. The only reason I know is that my husband, a member of the school board, was there.

Reb Sholom Mordechai had accepted an invitation to speak at a high school, and several other schools participated so that he could inspire as many people as possible at one time, filling every inch of space in the assembly hall. When Reb Sholom Mordechai arrived, he paused when he noticed a young girl, whom we will call Ruchi, sitting in a wheelchair at the foot of the stairwell. He immediately offered to carry up her chair. He was told that due to the unusually large attendance, the wheelchair would pose a safety hazard in case of the need to evacuate, so just this once Ruchi would not be able to join the rest of the girls.
Sensing the little girl’s deep disappointment, Reb Sholom Mordechai told her that he would talk to her privately after the speech.

All week Reb Sholom Mordechai Rubashkin had been blowing audiences away with his mesmerizing message. His schedule was crammed with speeches to young and old, men and women, yeshivos and girls’ schools. For five days straight he went from speech to speech. By the time he finished each address, there was an unmistakable sense of kinas sofrim; his listeners wondered if they would have been able to summon such superhuman strength given the circumstances.

That day in this school’s auditorium, Reb Sholom Mordechai recounted what he considers the hardest night of his eight-year ordeal. It took place right after his first unsuccessful trial, when he was thrown into the local county jail. A guard brought him an orange prison uniform to change into, or, as he dubs it, “the Purim costume.” He started to comply, but when he got to his tzitzis he asked if he could keep them, certain it was his religious right to do so (it is allowed in federal institutions).

“Nope,” declared the guard. “Everything has to go in this box.”

“What about my kappel?” he ventured.

“I told you, everything has to go in the box.”

Reb Sholom Mordechai explained the significance of the two religious articles, but the guard remained unmoved. Realizing that the guard would probably remove the items forcibly, the prisoner let him know that if he went down that road, Jewish law would not allow him to budge from his place.

“Listen, buddy,” the guard began, “a lot of things are going to change for you tonight.”
“I’m sorry,” Reb Sholom Mordechai responded, faith overriding his fear. “I will follow your every instruction, but I am forbidden by Jewish law to do this. I cannot take them off.”
The guard ordered the prisoner to follow him to a cage with a cement slab for a seat, and then summoned his superior. Like a lion in his mesiras nefesh for Yiddishkeit, his hands cuffed behind him, Reb Sholom Mordechai coolly and respectfully repeated his position. The superior warned that he would be sent to solitary confinement if he didn’t obey orders.
“I don’t want to go to solitary confinement,” he answered, unflinching, “but I am Jewish and I cannot remove these garments.”

“I was saved from certain death.” // Rabbi Shlomo Noginski reflects on being attacked on the streets of Boston last week by 24-year-old Muslim...

Mum’s The Word: I could have spared my family the anguish,...