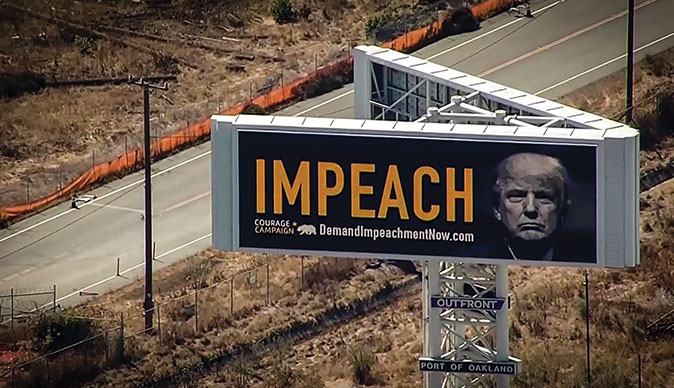 Revenge of the Sixth:
What Impeachment Meant
“If the Democrats win in November, they will move to impeach the president.” This notion is something I’ve been hearing for almost the entirety of the Trump presidency. Sure, it’s a fair approach to use for driving MAGA-ddicted voters to their polling stations. But that doesn’t explain all those times I’ve heard this sentiment expressed apprehensively by top administration officials and party operatives in private settings. Indeed, the fear is real, but entirely pointless.
To all those who fearfully embrace the scenario that Trump ends up being a half-term president, I’m going out on a rare limb here and stating categorically that regardless of the outcome of the November 6 midterms, no serious efforts will be launched to have Trump impeached. (Disclaimer: I submit my prediction barring the occurrence of something extra-unusual, like Trump deciding to test his theory that standing in the middle of Fifth Avenue and shooting someone wouldn’t actually cost him any supporters.)
Trump will never be impeached because in a duopolistic system of government, you don’t impeach someone if you truly believe he is bringing down his own party. The more dangerous the Democrats claim to believe Trump to be for the country, the more secure his presidency can expect to be. Democrats have come to terms with the fact that a post-midterm impeachment of Trump will pave the road for a possible Mike Pence dynasty, and that would be devastating to the Democrats. They’ve concluded that strategically, it’s better to wait Trump out and see what cards they’ll be dealt heading into 2020.
The bottom line is that country will always take a back seat to party, with the justification that only through party can there be country, and if country needs to take a hit from time to time, so be it. Not my rules; blame the two-party system.