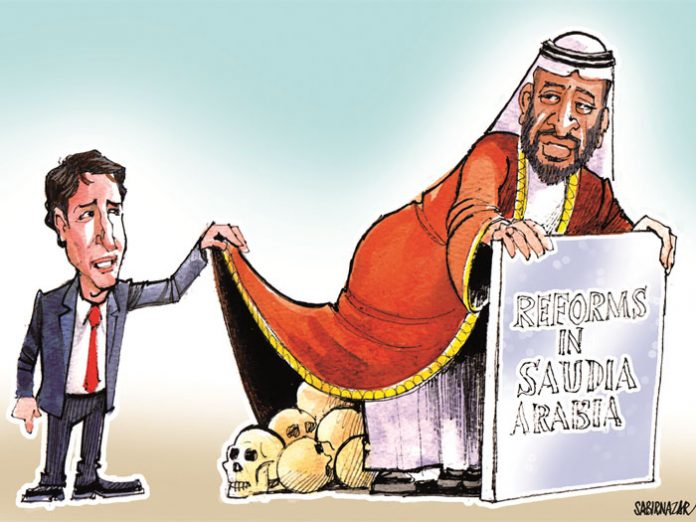 August 2018 was not a good month for the Kingdom of Saudi Arabia (KSA) or its energetic young dictator, Crown Prince Mohammad bin Salman (MBS). First, the Saudis were nasty to Canada, which surprised everyone. Then, MBS ordered the KSA’s armed forces to conduct bombings in Yemen, which resulted in the destruction of a school bus carrying dozens of little kids.

No, it was not intentional. As far as I know, Hamas is the only group that intentionally targets school buses. Hamas routinely launches unguided rockets from Gaza in the direction of Sderot in southern Israel, and often it’s during those exact minutes when school buses are transporting Israeli children back and forth. Israeli schools are armored. The homes are armored. Even the school bus stops are armored.

The only time that the children of Sderot are vulnerable is when they travel inside the school buses. That is why Hamas concentrates a lot of their rocket fire during those time slots. They hope for a hit on a bus that would cause mass casualties among Jewish kids.

Sure, the intentional targeting of children is a war crime, but that is what Iran pays Hamas to do, so that’s that. Almost no one in the UN ever said a word about the cynical cruelty of Hamas’ barrage of rockets timed to coincide with the Sderot school bus schedule.

But then something happened. An all-Muslim military coalition led by the Saudis blew up a school bus carrying Muslim kids in Yemen. Those nations that had been silent for years about Hamas shelling school buses carrying Jewish kids suddenly found their voices of indignant protest.

Suddenly the UN is in high dudgeon about those who risk harm to some, but not all, school buses. Currently, there is mounting concern in the UN hallways about Saudi cruelty towards Yemenis, in general, and risking the lives of Muslim schoolchildren, in particular. No double standard here. Nah, none at all.

To be fair, MBS, in particular, and the KSA, in general, deserve a good bit of criticism for the manner in which they have been making war on Yemen. The Saudis have launched a carpet bombing of Yemeni cities on a scale not seen since World War II, when America bombed cities in Germany and Japan.